Prasha Tuladhar’s sneakers, horn-rimmed glasses, and chic cropped hair could be the hallmarks of any New Yorker: shiny, sharp, shrewd. Little would onlookers know that without NewYork-Presbyterian Hospital/Columbia University Irving Medical Center’s ECMO Program, Prasha would not be alive.

In 2011, Prasha, 23, was a student at the New York University Tandon School of Engineering when she was diagnosed with scleroderma. After becoming pregnant several years later, she and her husband’s joy over their newborn daughter was complicated when one day after delivery Prasha’s lungs failed. 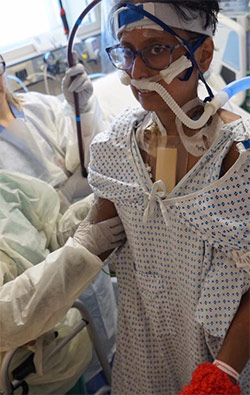 “I was on oxygen, and my body was so fragile. It was a very bad situation,” said Prasha.

One year later, Prasha still had not received a donor match, and her condition further deteriorated. In addition to pulmonary fibrosis, she developed pulmonary hypertension and required admission to the Medical Intensive Care Unit (MICU) at NewYork-Presbyterian Hospital, where she needed high levels of oxygen and medication for blood pressure support while, awaiting lung transplant.

Despite optimal care, Prasha’s body continued to weaken. The MICU staff called her a “miracle” for surviving each night. On her 28th birthday, Prasha’s family visited to celebrate, but that evening, Prasha acutely worsened. In an emergency surgery, the ECMO team placed Prasha on ECMO, a device that provides oxygen to and removes carbon dioxide from the body, supporting her heart and lungs.

But the ECMO staff feared complications due to Prasha’s petite frame and underlying scleroderma. Matthew Bacchetta, M.D., Surgical Director of the Adult ECMO Program, used his background in engineering and thoracic surgery to design a specialized ECMO configuration, the “Central Sport Model,” for Prasha. After Dr. Bacchetta’s successful surgery, Prasha went from dying to being able to exercise while supported on ECMO. Three weeks later, Prasha received a donor match.

“ECMO saved my life. It gave me three weeks of extra time before I got new lungs,” said Prasha, who was discharged from the hospital in April of 2016. 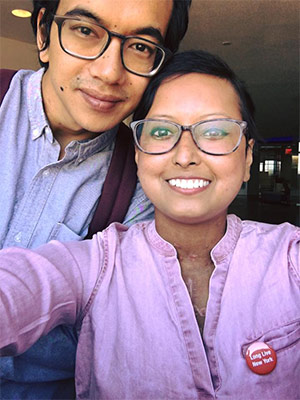 Since her discharge, Prasha has committed herself to building awareness for ECMO. An active ECMO social media ambassador, Prasha hosts seminars on Facebook groups to explain and answer questions about her experience on ECMO. In addition, Prasha volunteers at LiveOnNY, an organ procurement organization, as well as at NewYork-Presbyterian Hospital, where she regularly visits patients.

“I am very blessed. People who are put on ECMO are saved… I am so grateful for the entire team, for everyone who came and helped,” she said.