Pamela Abma has come a long way since she spent several weeks hospitalized at NewYork-Presbyterian Hospital/Columbia University Medical Center last year, barely clinging to life. Just as June of 2010 began, she suddenly developed acute respiratory distress syndrome (ARDS) as a result of an unusually violent reaction to a form of malaria that she had caught while performing missionary work in Uganda. Her reaction was so severe that she might not have survived were it not for the extracorporeal membrane oxygenation technology (ECMO) provided by Daniel Brodie, M.D., Director of the Medical ECMO Program, and Matthew Bacchetta, M.D., M.B.A., M.A., Director of the Adult ECMO Program. Thanks to ECMO, she made a miraculous recovery, and was out of the hospital in mid-July.

Her recovery was by no means complete when she left the hospital, however. She had lost twenty pounds while on ECMO, and was extremely weak; she could barely walk around. She desperately needed to put on the muscle mass she had lost. Choosing to forgo rehabilitation, she hired a personal trainer, and began her recovery by using weights in her swimming pool. Before long, she was spending the hot summer days swimming laps. Her strength gradually returned, and she was thrilled to be able to attend her son's wedding in August. 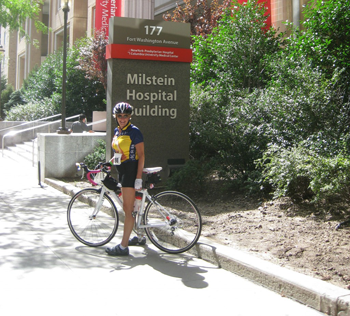 As winter set in, Pamela's daughter, Joy Abma, suggested that she make it a goal to participate in the following year's Bike MS, a bike-a-thon put on by the National Multiple Sclerosis Society. Pamela's niece had recently been diagnosed with MS, so the biking event seemed like an excellent way to support the fight against MS while also forcing Pamela to get in shape. She began to take spinning classes in preparation for the 50-mile ride, which she knew would be more strenuous, physically, than anything she had done in her life.

When winter was past and it warmed up again, Pamela took to the streets, biking regularly. That summer, Pamela and her family decided to commemorate the anniversary of her illness by reading aloud from a journal that Joy had kept throughout the time Pamela was on ECMO. Every day for those six weeks, Pamela would re-experience her illness through the eyes of her daughter, reading the passage written on that day the year before: "today, the doctors said you might not survive"; "today, you opened your eyes for the first time"; and so on. Until then, Pamela hadn't been able to bring herself to read through Joy's incredible journal in its entirety; finally doing so helped her understand exactly why her family calls her "the miracle girl."

The next fall, the big day finally arrived: on October 3rd, 2011, Pamela joined her daughter and her sister-in-law in a ride that began at the Lincoln Tunnel and ended by the piers near the George Washington Bridge. She recalls pausing on the bridge itself, to reminisce: while she had been on ECMO, her hospital room had had a view of the George Washington bridge; she couldn't see it herself from her position lying in the bed, but her guests remember it vividly. The cyclists decided to bike down to NewYork-Presbyterian Hospital/Columbia Medical Center itself, where Joy took the picture seen here of Pamela in front of the giant banner. Needless to say, Pamela's recovery has been an incredible success -- and the family is already talking about participating in a three-day bike-a-thon next year, in order to raise money for the fight against malaria.