Kevin Rogers: A Tee Off Of A Different Kind

Kevin Rogers was a healthy 25-year-old living in Staten Island when his life was turned upside down in May 2012. After a visit to the doctor for back discomfort, he was told it was likely pain related to the physical nature of his work for a heating oil company. But when pain relievers failed to help, he and his mother, Evelyn, knew something was very wrong.

Eventually the pain became so intense that Kevin went to the ER. He was found to have a 104-degree fever and was diagnosed with pneumonia, which landed him in a Staten Island hospital over Memorial Day weekend. Despite intravenous antibiotics, his condition deteriorated. He was admitted to the intensive care unit on a ventilator to help him breathe. His diagnosis: acute respiratory distress syndrome (ARDS), a life-threatening lung condition that prevents enough oxygen from getting through the lungs and into the bloodstream. 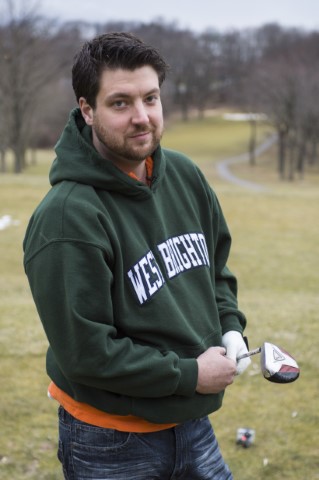 His mother kept a bedside vigil, aided by their large extended family, who visited him daily to offer words of support and encouragement. "We were told we had to prepare ourselves," Mrs. Rogers recalls. "So we started telling all our relatives to prepare to come in and see Kevin." She warned family members there would be no tears in her son's room. "In his room, it was all 'Go Kevin go!'" she says. "But in the hallway, that's where I would crumble."

Calls from the hospital's doctors to other physicians around the country revealed no new treatments; they all agreed with the care being provided. But Kevin continued to worsen.

The final call proved to be a lifesaver, when the ICU director called NewYork-Presbyterian/Columbia University Medical Center to see if Kevin was a candidate for extracorporeal membrane oxygenation (ECMO). NewYork-Presbyterian/Columbia doctors had been reporting success with the approach in some adults with ARDS, and they deemed Kevin a candidate.

"I learned that ECMO was an 'out-of-body' way to oxygenate the blood. I had no idea what that meant, but I felt as if I was having an out-of-body experience myself, so I thought, 'Why not?'" says Mrs. Rogers. "When the ECMO transport team arrived, we were impressed by their confidence. It was like, 'Hooray, the Marines have landed!'" Family and hospital staff applauded as the team transferred Kevin out of the hospital – attached to ECMO – for the ride to the NewYork-Presbyterian/Columbia campus in Manhattan. 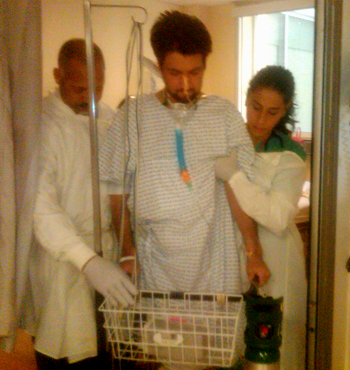 Because ECMO provides oxygen directly to the blood , the ventilator can be used sparingly, allowing Kevin's lungs to rest and began to heal on their own. He was on ECMO for 14 days, and continued to recover at NewYork-Presbyterian/Columbia until his discharge almost two months later. He pushed himself through rehabilitation with one goal in mind: to be present at his family's annual golf outing in Ocean City, Maryland on August 3, and to be the first to tee off. He achieved his goal, and at dinner that night, his family cheered him with a song used to celebrate all great family moments.

"It was pretty amazing that out of everywhere in the world, I was lucky enough to live close to Columbia to get this care. It saved my life," says Kevin.

"If things didn't work out the way they did, this all could have turned out very differently," adds his mother. "When they say, 'Amazing things are happening here,' they're not kidding!"

If you are a physician, please contact us to have your patient transferred