Stroke is the fifth leading cause of death in the United States with approximately 800,000 people experiencing a stroke each year. This equates to one stroke every 40 seconds and one death every four minutes. A stroke occurs when:

A stroke is a medical emergency and treatment should be sought as quickly as possible. NewYork-Presbyterian Queens is a Primary Stroke Center as designated by New York State and The Joint Commission, and offers: 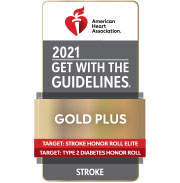 The stroke program at NewYork-Presbyterian Queens earned the American Heart Assocaition/American Stroke Association Get With The Guidelines®-Stroke Gold Plus award for the past three years as well as a spot on the Target: Stroke Honor Roll Elite Plus.