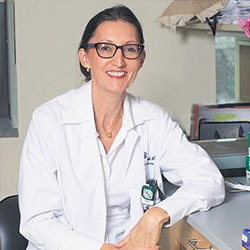 One Common, One Rare, Both Challenging

“Multiple myeloma is the second most common hematologic disease. In contrast, AL amyloidosis is a very rare disease,” says Suzanne Lentzsch, MD, PhD, Director of the Multiple Myeloma and Amyloidosis Program at Columbia University Irving Medical Center. “We have multiple clinical trials and investigatorinitiated trials for both. Our strength here at Columbia is a substantial conflation of research that takes us from bench to bedside.” 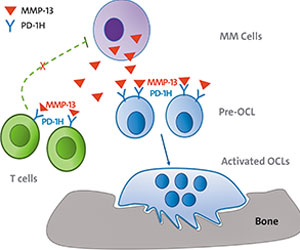 Identifying linkages between MMP13 and both osteoclast activation and immune suppression, the researchers could now target MMP13 for development of a neutralizing antibody to prevent extensive bone disease and the risk of infection that comes with immune suppression. Adds Dr. Lentzsch, “Not only did we identify the mechanism of action of bone disease and suppressed immune system, we also identified a new approach to target both.”

AL amyloidosis is a rare systemic disorder caused by an abnormality of plasma cells in the bone marrow, which builds up amyloid in and around tissues, nerves, and organs, resulting in progressive and widespread organ damage and high mortality rates. The Columbia Amyloidosis Multi-disciplinary Program (CAMP), under the leadership of Dr. Lentzsch, is an international referral center for this multiorgan disorder, and each year the program cares for more than 100 AL patients. At the same time, innovative research by Dr. Lentzsch and her colleagues has resulted in a series of translational clinical trials, including those studying new treatments for relapsed AL amyloidosis.

“All therapies have focused on the destruction of plasma cells to stop the production of light chains forming the amyloid,” says Dr. Lentzsch. “Because existing amyloid is not affected, impairment of organ function continues. So we turned our attention to monoclonal antibodies, which target the amyloid fibrils directly, destroying the existing amyloid. Several years ago, we tested antibody 11-1F4 against amyloidosis. Not only did we use this antibody to break down amyloid, we could also use it to detect amyloid, which is an extremely unique approach,” says Dr. Lentzsch.

Physicians from Columbia University did the first-in-human clinical trial, which is the only center worldwide that offers treatment with this monoclonal antibody and plan to use this antibody as a theranostic tool, which can image organs with amyloid infiltration and, at the same time, break down amyloid. The antibody will now be tested in a phase 3 clinical trial, with the goal of bringing it to FDA approval.