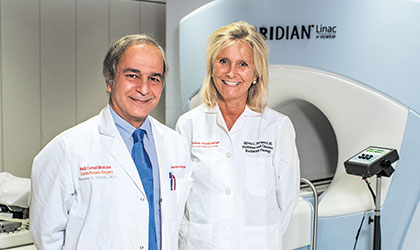 “It takes a lot of collaboration with the surgical department to recruit patients for a trial like this,” says Dr. Formenti. “These patients traditionally undergo surgery as the first-line therapy. It is challenging to recruit patients when discussing the risk of delaying surgery versus the potential benefit of a longer impact in terms of being free of disease after the surgery compared to surgery alone. Dr. Altorki is a very enlightened surgeon who understands basic science and has a track record of tapping into our discoveries in the lab and bringing them to fruition with our patients.”

“Our departments meet almost every week for our tumor conference with strong participation from radiation oncology, surgery, and medical oncology,” says Dr. Altorki. “Within a short period of two years, we have enrolled 45 patients for this trial, which is an amazing recruitment rate. Our primary objective is to determine whether preoperative anti-PDL-1 therapy with or without radiation leads to improvement in disease-free survival from a historical control rate of 75 percent at two years to 88 percent. Our preliminary results show that the response rate is far above what you would expect from other regimens using immune checkpoint inhibitors. More importantly, patients enrolled in this trial go to the operating room within six weeks, while patients who undergo immunotherapy with chemotherapy will not go to surgery for 12 weeks. We are very excited about this protocol.”

The clinical protocol developed by Dr. Altorki and Dr. Formenti focuses on patients newly diagnosed with early resectable lung cancer – clinical stages I, II, and IIIA. “These are patients who are potentially curable by surgery,” says Dr. Formenti. “Instead of performing surgery first followed by immunotherapy, we are doing immunotherapy first – plus or minus radiation – then taking them to surgery. The results of adding radiation are quite promising, with data suggesting that radiation significantly increases the response rate. We know this because all of these patients undergo surgery, so we can assess the response in the specimen analyzed after surgery.”

Both Dr. Altorki and Dr. Formenti believe this study will pave the way for similar trials whereby immunotherapy with or without radiation is tested prior to surgery. “This trial could become a model and proof of principle study that demonstrates you can use the tumor to immunize the patient against his or her original disease,” says Dr. Formenti. “When you go to the OR there is no tumor left having already recruited the immune system of the patient to fight the same tumor.”

“My hope is to create a consortium to conduct preoperative treatment trials investigating various immunotherapy strategies where you obtain tissue before and after surgery and during treatment to better understand the biology of how the treatment works,” says Dr. Altorki. “Wouldn’t this be terrific?”