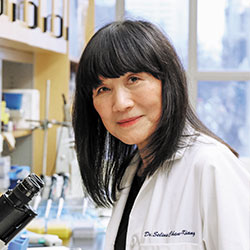 With a five-year, $9 million Program Project Grant (P01) from the National Cancer Institute, Selina Chen-Kiang, PhD, Principal Investigator, and her colleagues at Weill Cornell Medicine are moving forward to better understand why patients with an aggressive and incurable form of lymphoma initially respond to treatment, only to relapse over time. Their findings may enable them to develop therapies that are effective, well tolerated, and tailored to individual patients with mantle cell lymphoma (MCL). This is the first P01 that is solely focused on MCL. "Currently we have approved drugs and experimental therapies for MCL, yet we don't precisely know how they work or why patients ultimately become resistant to them," says Dr. Chen-Kiang, who is Professor of Pathology and Laboratory Medicine, Professor of Microbiology and Microbial Pathogenesis, and a member of the Sandra and Edward Meyer Cancer Center at Weill Cornell Medicine. "We need to know how to use these drugs based on scientific principles so that we can better patients' lives and ultimately cure their disease."

Dr. Chen-Kiang and her team have spent the last two decades investigating how the cell cycle is regulated in normal immune function and in B-cell cancers. In previous studies, they discovered that intentionally stopping the cell cycle by inhibiting the enzyme CDK4 or CDK6, which is needed for the first growth phase, not only prevents cancer cells from dividing, but also weakens them by causing an imbalance in gene expression in mice. To replicate these findings in humans, Dr. Chen-Kiang identified a small molecule on Pfizer's shelf that could act in the same way as the natural CDK4/6 inhibitor. "I knew I needed this molecule to understand the normal immune response and how to correct it and possibly control cancer," says Dr. Chen-Kiang. "I also knew at that time that this particular step in the cell cycle was the key step in driving human cancer, especially MCL and breast cancer."

In two phase 1 clinical trials, her team found that the drug, palbociclib, now approved by the FDA for breast cancer, shrank MCL tumors and induced remission in a significant number of patients. "Our trial showed that palbociclib plus ibrutinib, an FDA-approved MCL drug, is very well tolerated," says Dr. Chen-Kiang.

This trial, led by Peter Martin, MD, Director of the Lymphoma Service at Weill Cornell, revealed that palbociclib combined with ibrutinib shrank MCL tumors in 67 percent of patients. Moreover, 37 percent of the patients achieved durable complete remission for as long as 5.5 years. "This was remarkable," says Dr. Chen-Kiang. "Patients who were treated with ibrutinib alone initially went into partial or complete remission, only to become resistant to it quickly or over time."

The P01 grant is enabling Dr. Chen-Kiang and her team to expand on these findings with three synergistic translational studies. The team used genomic and bioinformatic approaches to discern how genes are programmed by the cell cycle in tumor cells, how palbociclib reprograms them to thwart cell division, and how to overcome resistance to palbociclib and ibrutinib. "In the past we analyzed the tumor in bulk. But now we have the ability to actually analyze and interrogate every tumor at the single cell resolution. And that's extremely powerful," says Dr. Chen-Kiang.

"By controlling the cell cycle, palbociclib can make the tumor cell exquisitely sensitive to other drugs."

In September 2018, Dr. Chen-Kiang began a multicenter phase 2 study of palbociclib-ibrutinib combination therapy to understand why this combination therapy is more effective than ibrutinib alone. "If we know how to combine the cell cycle inhibitor with a partner drug, we can increase the durability and depth of the clinical response dramatically," she says. "We have 10 sites across the nation and we're hoping to complete patient accrual in two and a half years. The most important thing, which is very gratifying, is that we already have 16 patients in our trial, and 15 of them have responded, so we know it's working."