Will Immunotherapy Play a Role? 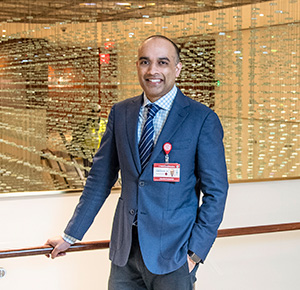 “Glioblastoma, unlike lung cancer and some other solid tumors like melanoma, does not typically respond to immunotherapy,” says Rohan Ramakrishna, MD, a surgical neuro-oncologist with NewYork-Presbyterian/ Weill Cornell Medical Center. “For example, in lung cancer, you have proteins expressed, such as PDL1, that correlate with a response to immunotherapy. Unfortunately, glioblastoma does not respond to immunotherapy in a way that correlates with PDL1 expression. Moreover, GBM does not appear to be intrinsically immunogenic given its relatively low mutational load and associated low neoantigen expression. It is thought that tumors with high mutational burdens have significantly elevated numbers of neoantigens that make it possible for the immune system to recognize the tumor and eliminate it. Therefore, GBM doesn’t appear to be intrinsically responsive to immunotherapy via check point inhibition, at least in trials conducted so far.”

Despite these challenges, neuro-oncologists and neurosurgeons are not deterred in their pursuit of immunotherapy approaches that can surmount the unique treatment obstacles presented by malignant tumors within the brain. “Although we don't have the data yet to be confident, the effect of neoadjuvant immunotherapy on GBM is an exciting area to look into and the immunosuppressive microenvironment remains a potential target for treatment,” notes Dr. Ramakrishna, who serves as Co-Director of the William Rhodes and Louise Tilzer-Rhodes Center for Glioblastoma at NewYork-Presbyterian and the Director of the Brain Metastases Clinic at Weill Cornell. “Some recent studies have shown that immunotherapy via checkpoint inhibition alters the tumor microenvironment and causes genetic changes in the tumor itself, despite mixed clinical results. This is definitely an area to potentially exploit.”

At Weill Cornell Medicine, Dr. Ramakrishna is the Principal Investigator of the CAPTIVE trial. This innovative phase 2 clinical trial for recurrent glioblastoma evaluates a combination of DNX- 2401, a genetically modified common cold virus, followed by pembrolizumab, an immunotherapy given every three weeks for up to two years or until disease progression. “When you inject the virus into the tumor, it triggers an immune response against the tumor,” he says. “The dying tumor cell releases signals and generates neoantigens that stimulate the immune system to kill additional tumor cells. By selectively replicating within cancer cells, but not normal cells, the virus sets off a chain reaction of tumor cell killing and further spreads the onco lytic virus to adjacent tumor cells. A week after the virus injection the patient starts treatment with pembrolizumab that activates an immune response against tumor cells.”

Preliminary results demonstrated that the combination of the two agents is well tolerated and associated with promising survival. The trial recently closed enrollment and results are now being processed.

Gleolan (aminolevulinic acid hydrochloride) is one of the newest tools for use in glioma surgery. The optical imaging agent when given orally has a remarkable ability to pass through the blood-brain barrier and penetrate a tumor. Viewed under blue light during surgery, Gleolan, which was FDA approved in 2017, fluoresces as a hot pink indicator distinguishing tumor cells from healthy brain tissue. Theodore H. Schwartz, MD, Co-Director of Surgical Neuro-Oncology  at Weill Cornell, has used the agent on several patients undergoing surgery for glioblastoma. “The ability to identify the full extent of a tumor is invaluable for resecting an aggressive tumor, particularly glioblastoma,” says Dr. Schwartz. “Often in these tumors, we cannot tell if there are small amounts of residual tumor. Using Gleolan, we can now see tumor cells that were previously invisible. In all my cases, postoperative MRI scans showed that the entire tumor had been removed.”