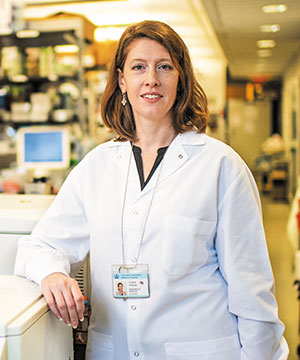 In the Department of Neurology's Center for Translational and Computational Neuroimmunology at Columbia University Irving Medical Center, Elizabeth M. Bradshaw, PhD, Co-Director of Basic Research, has set her sights on microglia – the resident innate immune cells of the central nervous system – in the pathogenesis of Alzheimer’s disease (AD).

“Genetic studies of AD directly implicate the involvement of the innate immune system,” says Dr. Bradshaw. “We have identified eight genetically associated proteins that may be working together in a tyrosine phosphorylation signaling pathway in innate immune cells. We now seek to identify the common interacting molecules of these eight proteins, which we believe function together in microglia and for which we already have strong supporting evidence of a shared pathway. Finding a binding partner shared by many genetically associated proteins may be an ideal therapeutic target for AD.”

“Our data will potentially provide a mechanistic answer of how these proteins function and, in doing so, increase an individual’s risk of developing AD.”

If Dr. Bradshaw and her colleagues can validate that the proteins are phosphorylated and that the interactions occur in situ in the Alzheimer’s disease brain, they can then dissect the signaling pathway in vitro to understand functional outcomes and isolate targets for intervention. One specific target of Dr. Bradshaw’s investigations is the CD33 protein. “We found a very clear change in the amount of the protein on the surface of peripheral innate immune cells based on someone’s genetic background,” says Dr. Bradshaw. “The influence of this genetic change related to how much full-length CD33 was expressed on the surface of innate immune cells. We then looked at functional outcomes and found a difference in peripheral monocytes, as well as monocytes that we polarized, to be more microglia-like in their ability to internalize amyloid beta (Aß). We saw that this was associated with the genetic variation as well. The AD genetic risk led to more full-length CD33, as well as a decreased ability to internalize or to uptake the Aß (1-42) peptide, which is the major constituent of amyloid plaques in the brains of Alzheimer patients.”

The researchers conducted an unbiased screen and identified proteins that were being bound to CD33 through sialic acid. “We focused on CD45, in particular, which is another immune-limited molecule only expressed in immune cells,” adds Dr. Bradshaw. “We are now working on understanding the relationship of these two proteins and to see if there is a possible therapy in creating small molecules that disrupts the binding of the two proteins.”

Dr. Bradshaw and her colleagues have since identified small molecules and antibodies that they think have therapeutic potential. With promising data from early in vitro studies looking at target engagement, funding has been provided to accelerate the development of a preliminary therapeutic firstround molecule. It’s still early days and the small molecule needs to be optimized for therapeutic application, but their journey from hypothetical to probable has garnered much attention by the Alzheimer’s disease community.