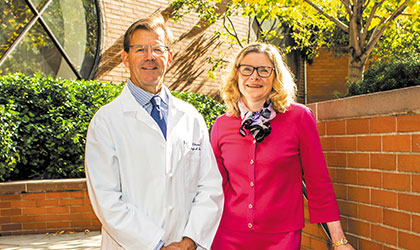 Guy M. McKhann II, MD, Director, Epilepsy and Movement Disorder Surgery, and Neil A. Feldstein, MD, Director, Pediatric Neurological Surgery, NewYork-Presbyterian/ Columbia University Irving Medical Center, are advancing methods for identifying more precise boundaries of seizure onset and minimally invasive treatment approaches for refractory epilepsy. “In the past, in order to narrow the site of the seizures we would open up the head and apply large arrays of electrodes onto the brain to record seizures,” says Dr. McKhann. “Stereo-electroencephalography [SEEG] has dramatically changed this approach. Using robotics, we can now put 2mm electrodes into the brain tissue through incisions that are just 3mm to capture data on the seizure as it occurs. This allows us to interrogate the brain in a much less invasive fashion. Once we know empirically through SEEG and advanced brain imaging where the seizures originate, we can determine if it makes sense to use a laser to ablate that area or perform an open surgery.”

Coupled with the emergence of SEEG has been the development and refinement of thermal ablation therapies. “If the seizures are coming from a very focal area in the brain, then the patient is a potential candidate for laser ablation. This technique is particularly valuable for reaching seizures originating in the hippocampus,” adds Dr. McKhann, who has performed some 50 thermal ablation procedures.

“With the newest ablation technique – MR-guided laser interstitial thermal ablation – we can place a laser fiber through a very small opening in the skull into the hippocampus and using an MRI scanner we can see exactly what we’re doing in real time in terms of ablating the seizure focus,” continues Dr. McKhann. “The approach offers access to foci virtually anywhere in the brain with minimal disruption of the overlying cortex and white matter, resulting in fewer neurological side effects.”

As a member of Columbia’s Comprehensive Epilepsy Center, neurologist Alison M. Pack, MD, provides expertise in diagnosing, identifying the cause, and classifying the patient’s epilepsy. Dr. Pack also applies the latest technologies to localize seizure onset in order to optimize outcomes for patients who undergo a laser ablation or surgical resection. “Pre-surgical testing will involve neuroimaging, including a brain MRI and PET, as well as inpatient EEG monitoring,” says Dr. Pack. “With the availability of robot-assisted SEEG, the seizure-onset zone can often be localized to the mesial temporal lobe structures.”

In a recent study, Dr. McKhann, Dr. Pack, and their colleagues at Columbia looked at the effectiveness of laser ablation for temporal lobe epilepsy – with and without mesial temporal sclerosis (MTS) – if hippocampal seizure onsets are localized by SEEG. “We evaluated 30 patients who underwent MR-guided laser interstitial thermal ablation of the mesial temporal lobe,” says Dr. Pack. “Seizure freedom was achieved in 57 percent of patients overall, offering early evidence that by confirming mesial temporal onset with SEEG, patients without MTS can achieve rates of seizure freedom following laser ablation similar to those with MRI-diagnosed MTS.”

Dr. McKhann notes that because laser ablation is a focal therapy, surgical resection of the epileptogenic zone still offers the best chance of seizure freedom. “However, since the laser ablation is so much less invasive, most patients decide that they want to have laser ablation because some 60 percent will become seizure-free. And if not, they can always go on to have an open surgery.”