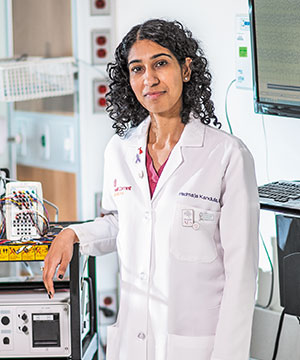 A patient with refractory status epilepticus often faces weeks in an ICU requiring prolonged anesthesia with coma-inducing drugs to control the seizures. “Refractory status epilepticus is a condition that we face as neurointensivists, epileptologists, and neurologists,” says Padmaja Kandula, MD, Director of the Comprehensive Epilepsy Center at NewYork-Presbyterian/ Weill Cornell Medical Center. “It is a continual seizure state that does not respond to any of our traditional, anticonvulsive medications, even when used back to back. In order to treat ongoing seizure burden and prevent further brain injury, and to some degree motor injury, we place the patient in a medically induced coma.”

General anesthetics are administered 24 hours a day in order to provide cerebral rest, however, all have long-term consequences affecting blood pressure and heart rate if used for prolonged periods. In some cases the seizure state recurs on the reduction or withdrawal of the anesthesia, a condition called super-refractory status epilepticus. “These patients have a very high mortality, depending on the cause of their seizure state,” says Dr. Kandula. “It can be caused by a structural problem, such as a stroke or a tumor, but sometimes we can never identify the cause, making this entity particularly challenging to treat.”

“The logic is that provoking a convulsion alters GABA, making it more difficult to have ongoing seizures by raising the seizure threshold.”

Recently, a young woman in her 20s with new-onset refractory status epilepticus was transferred to the Neuro ICU. “We tried seven intravenous drugs – all anesthetics – as well as ketamine and an inhalational gas anesthetic, which is even one step further,” says Dr. Kandula. “She failed all of those. The patient was treated concurrently with immune therapy, but that targets the underlying cause, not necessarily the ongoing seizure state.”

After exhausting conventional therapies, Dr. Kandula and the ICU team in consultation with the patient’s family discussed electroconvulsive therapy (ECT) as an alternative treatment. “The general guideline for ECT in status is loosely a ‘treatment consideration,’” says Dr. Kandula. “It is not an approved therapy for seizure states, but rather for refractory depression and diffcult-to-control schizophrenia. Over the years, small case series have described the off-label use of ECT for super-refractory status epilepticus, but there have not been any large-scale studies. It’s considered a salvage therapy, but we believe worth trying in individuals who are so critically ill.”

In collaboration with Darlene Mitera, MD, Director of ECT, Department of Psychiatry at Weill Cornell, ECT was initiated with good results. “The mechanism is poorly understood, but the idea is that inducing an additional seizure with electrical stimulation alters neurotransmitter levels, in particular gamma-amino butyric acid – GABA,” says Dr. Kandula. “The logic is that provoking a convulsion alters GABA, an inhibitory neuro transmitter, making it more difficult to have ongoing seizures by raising the seizure threshold.”

However, questions remain on the most effective ECT strategy, including stimulation parameters, spatial approach, and number of total sessions. “We took a bilateral approach since the seizures were multifocal,” says Dr. Kandula. “We have also tried ECT with a young man who is doing well. Certainly, this is an area of ongoing interest we are interested in pursuing. The idea of using ECT earlier in the status epilepsy treatment armamentarium, and not just as salvage therapy, remains an active area of exploration.”