Intranasal Spray for Supraventricular  Tachycardia An intranasal medication spray for treating paroxysmal supraventricular tachycardia is currently being investigated at NewYork- Presbyterian/Weill Cornell Medical Center and sites throughout the country. “The NODE-301 and NODE-302 clinical studies are extensions of the NODE-1 efficacy study, which demonstrated an 87 percent effectiveness of the etripamil nasal spray in terminating spontaneous episodes of supraventricular tachycardia within a few minutes,” says James E. Ip, MD, Director, Cardiac Pacing and Implantable Devices. “Patients are now being trained to use the device and once they qualify, they can self-administer the medication during an episode of tachycardia.” 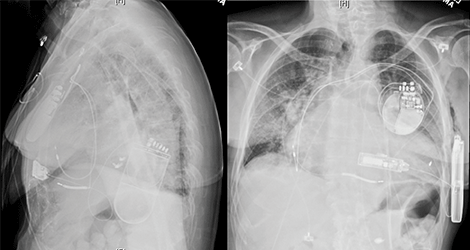 Alternative to Biventricular Pacing  Individuals with congestive heart failure benefit from cardiac resynchronization therapy (CRT). However, according to Dr. Ip, approximately 5 to 10 percent of patients cannot be implanted with left ventricular leads due to their anatomy. “Their vessels are too small or are unable to be cannulated,” he says. “Sometimes the vessels are near the phrenic nerve, which we don’t want to stimulate or in areas that require too much energy to stimulate.”

In these cases, the only treatment option is open-heart surgery in which the lead is placed on the outside of the heart. Weill Cornell is participating in the multicenter SOLVE-CRT trial offering the WiSE™ CRT System, an investigational wireless cardiac stimulation system for the left ventricle. “This device consists of a small pellet that is about the size of a grain of rice placed on the inside of the left ventricle and stimulated by a subcutaneous implantable ultrasound transducer, which detects the stimulation from the right side of the heart,” says Dr. Ip. “It then sends an ultrasound beam to activate the pellet, which is sitting on the left side of the heart. It can provide resynchronization within a fraction of a second.”

A New Path to Physiological Pacing “Traditionally when we implant pacemakers, we place the wires in the right ventricle and attach it to the muscle, either at the apex or anywhere along the septum,” says Dr. Ip. “For some patients, this is not a natural way to stimulate the heart because the heart inherently has a conduction system that provides more coordinated, quicker stimulation. An alternative pacing method that has been gaining interest is placing the pacing wire in the middle of the heart to engage the heart’s natural electrical system. This can theoretically provide more physiologic and coordinated stimulation of the heart and can help some patients who require a lot of cardiac pacing.”

A Pacemaker for the Lungs  Central sleep apnea is characterized by a lack of drive to breathe during sleep, resulting in periods of insufficient ventilation and compromised gas exchange. “Typically, as electrophysiologists, we are just involved in treating patients with electrical disease of the heart, but there is certainly overlap with patients who have heart failure or atrial fibrillation that causes dysregulation of the natural breathing rhythm,” says Dr. Ip, who is now offering these patients treatment with the remedē® System, a newly FDA-approved phrenic nerve stimulation device. “The procedure involves implantation of two wires; one that senses the rate of breathing and another that stimulates the phrenic nerve. The device only turns on when the patient is sleeping and lying down. When the breathing pattern starts to slow down or stop, it stimulates the phrenic nerve to create a breath for the patient.”