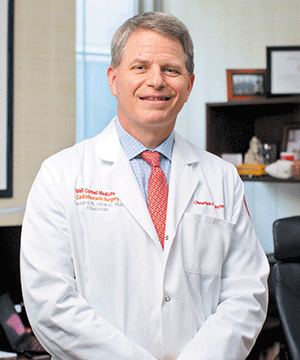 An Evolution in Technique and Technology

Technology-based advances are enabling cardiothoracic surgeons to help the sickest and the oldest patients with disease complexity involving multiple valves, multiple bypasses, and aortic emergencies. “Valve surgery is probably undergoing the greatest evolution, becoming more prevalent as patients are living longer,” says Leonard N. Girardi, MD, Cardiothoracic Surgeon-in-Chief, NewYork- Presbyterian/Weill Cornell Medical Center. “Traditionally, these procedures were handled strictly through open-heart surgery. Today, a significant portion of the valve operations are being done through the groin endovascularly – by surgeons or with our interventional cardiology colleagues. If the procedure cannot be accomplished through the groin, we move to the next step, robotics. And from there, we can then consider minimally invasive approaches before proceeding to open-heart surgery.” 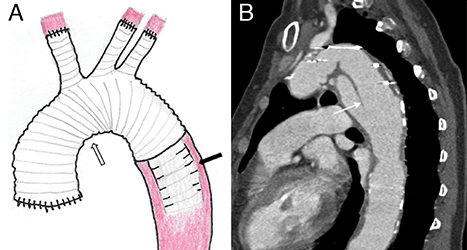 A: Schematic of the elephant trunk procedure shows replacement of the aortic root, ascending aorta, and aortic arch with a synthetic graft.
B: CT angiography sagittal oblique view of a patient with Marfan syndrome shows the elephant trunk suspended in the proximal descending thoracic aorta.

Weill Cornell is one of a handful of centers in the U.S. involved in a clinical trial to treat acute type A aortic dissections with the frozen elephant trunk graft technique, an approach used in Europe, but not yet FDA approved here. “This is an interesting procedure where you treat the aorta beyond what you would normally manage surgically,” says Dr. Girardi. “Having a regular graft with a stent graft attached to the end of it is a unique concept that had not been previously done. Potentially we could eliminate the need for a second operation by treating more of the aorta that is diseased through a sternotomy and never have to go into the left chest to treat the second part of the aorta.” 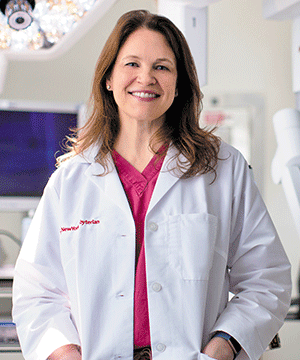 Four-dimensional flow MRI is enhancing surgical repair of aneurysms where the valve is spared. “By interpreting the flow dynamics in the aorta, we can determine if we are providing optimal flow to the coronary arteries and minimizing stress on flow in the native aorta beyond the aneurysm repair to minimize complications such as dissections or aneurysm formation,” notes Dr. Girardi. “We can tell how much stress is on the leaflets of the valve that we just saved and whether we should tweak the technique to make the physics better for heart function and coronary blood flow.”

“My top priority is to provide safe and effective surgical treatments in the least invasive way possible. I treat patients who might benefit from a minimally invasive or a percutaneous approach to treat the heart valves,” says Stephanie L. Mick, MD, Director of Robotic and Minimally Invasive Cardiac Surgery at Weill Cornell.

Much of Dr. Mick’s research centers on the optimization of robotic mitral valve repair. Among her investigations while at Cleveland Clinic was a large study showing that del Nido cardioplegia, previously only used in children, was also safe in adults. “The benefit of del Nido cardioplegia is that it streamlines valve operations and makes them more efficient, without risk to the patient. We also employ other techniques, such as the use of neochords, to make robotic mitral valve repair as efficient and effective as possible.”