Lifesaving and Life-Enhancing Approaches to Care 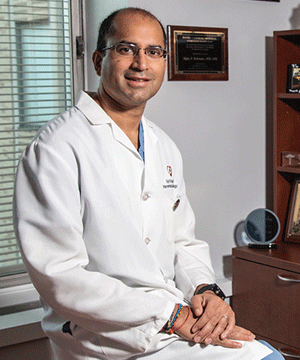 “There are many patients with severe peripheral artery and venous disease who are never diagnosed, let alone treated,” says Ajay J. Kirtane, MD, Director, Cardiac Catheterization Laboratories at NewYork-Presbyterian/Columbia University Irving Medical Center. “One of the critical components of taking care of patients with vascular disease is to be comprehensive and to address the overall state of the patient.” 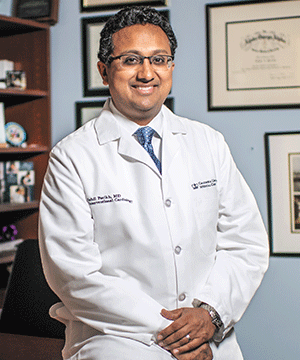 “These patients require a dedicated multidisciplinary approach in which interventional cardiologists, vascular surgeons, and other vascular specialists work together to optimize treatment for such life-threatening conditions as pulmonary embolism,” says Sahil A. Parikh, MD, Director of Endovascular Services at NewYork-Presbyterian/Columbia. “We have a team at Columbia that follows a paradigm now in use around the country called the Pulmonary Embolism Response Team [PERT]. This multidisciplinary group is activated whenever a patient with a massive or submassive pulmonary embolism is admitted to the hospital. One of our doctors will serve as the point person in the patient’s evaluation and discussion of treatment.”

“The Pulmonary Embolism Response Team has allowed us to take care of patients with life-threatening pulmonary embolism not only within our hospital, but also those who are transferred from outside institutions,” adds Dr. Kirtane. “Many patients can be treated medically, but higher-risk patients can be successfully treated through catheterbased technologies. In addition, for patients who go on to develop chronic thromboembolic pulmonary hypertension [CTEPH] and who are not candidates for surgery or who have already had surgery, we are able to offer balloon pulmonary angioplasty. We have refined the procedure with techniques used in advanced coronary lesions, such as chronic total occlusions of the coronary artery, to bring those to bear in the pulmonary vasculature. This is a somewhat unusual approach, but because of our advanced coronary expertise, we felt comfortable applying it to the pulmonary vasculature.”

Drs. Kirtane and Parikh also served as the National and Site Principal Investigators of the international, multicenter RADIANCE-HTN SOLO and RADIANCE II trials to assess whether the device-based approach of renal denervation can reduce blood pressure. This study is comparing medication titration for hypertension control following endovascular ultrasound renal denervation vs. a sham procedure. The RADIANCE-HTN SOLO results at six months, published in the May 28, 2019, issue of Circulation, demonstrated that in patients with combined systolic and diastolic hypertension, fewer medications were administered in the renal denervation group compared with a sham control, and the blood pressure-lowering effect of endovascular ultrasound renal denervation was maintained at six months.

“The results of the RADIANCE-HTN SOLO trial are unique in that they represent blinded randomized data demonstrating that ultrasound renal denervation may have the potential to serve as an important adjunct to medications to lower blood pressure,” says Dr. Kirtane. “If confirmed in the larger and ongoing RADIANCE II trial, this therapy would have the potential to help patients reach their blood pressure goals, particularly for those who have problems taking medicines or who prefer not to take medication.”

“Our Vascular Medicine and Intervention group within the Center for Interventional Vascular Therapy has participated in and led many of the pivotal clinical trials of medicated stents, drug-coated balloons, and other device technologies that are now widely available,” says Dr. Parikh. “In addition, we are also deeply involved in education within the field and offer a one-year dedicated advanced training fellowship in vascular medicine and intervention. Our center is only one of a handful of sites in the country that offers this type of comprehensive training program.”