Optimizing the Continuum of Stroke Care 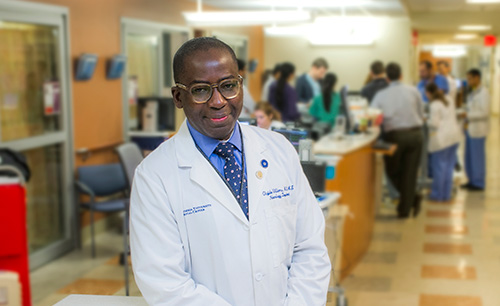 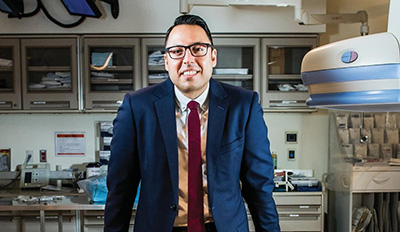 “Advanced stroke care must address four goals,” says Dr. Williams. “First, try to prevent a stroke from occurring, and second, if a stroke does occur, treat it as quickly as possible to minimize disability. Third, augment stroke care to accelerate and optimize as much recovery as possible, and finally, prevent another stroke from occurring. Our work here at Columbia and Weill Cornell is making sure that we are leading the way across those four components involved in the continuum of stroke care.”

Accredited by The Joint Commission as a Comprehensive Stroke Center, NewYork-Presbyterian is also one of four National Institutes of Health-funded Centers for Stroke Disparity Solutions. “One of the pillars of a disparity stroke center is to meaningfully address stroke prevention — especially within the most vulnerable communities,” says Dr. Williams. “Much of our research is focused on lifestyle behavior changes and hypertension control, transitional care and intervention, and public stroke education.”

The relationship between stroke and cancer is a particular focus of Dr. Navi. “Cancer and its treatments increase patients’ risk of developing stroke and heart attack through effects on the clotting system and blood vessels,” he says. “In fact, some cancers, such as lung cancer, are associated with up to a 10 percent risk of stroke or heart attack in the first year after cancer diagnosis. Furthermore, due to improvements in cancer treatments, patients with cancer are living longer, so preventing cardiovascular events in these patients becomes more important as long-term quality of life becomes a top priority.”

In 2018, Dr. Navi published a pilot feasibility trial in JAMA Neurology demonstrating that people with active solid or hematologic cancer who have an acute ischemic stroke are safe to randomize in a clinical trial to either anticoagulation or antiplatelet therapy. “Cancer not only increases the risks of first and second stroke, but it also increases the risk of major bleeding, which may counterbalance any benefit from an aggressive blood thinner,” he says. “This was the first published trial that compared two different blood-thinning strategies in this population.”

As one of 25 regional centers in the NIH StrokeNet clinical trials network, NewYork-Presbyterian is helping to advance stroke treatment, prevention, recovery, and rehabilitation. Most recently the Hospital launched the Mobile Stroke Treatment Unit in partnership with Weill Cornell Medicine, Columbia University Irving Medical Center, and the Fire Department of New York, the first of its kind on the East Coast. “When it comes to the rapid treatment of stroke and early thrombolysis, it doesn’t get much earlier than driving a stroke ambulance to a patient’s door and starting treatment right outside the home,” says Dr. Williams. “From the time we arrive at the home to the time the patient actually receives the CT scan and workup, it’s within 30 to 45 minutes to treatment. The delays that formerly occurred from arrival in the ED to treatment have been bypassed.”

If not for these streamlined and advanced processes, Ruth-Ann Carlock’s life would be very different today. In 2017, Ms. Carlock, then 68, was spending a pleasant Saturday afternoon reading. “All of a sudden I didn’t feel exactly right,” she says. “I stood up and walked from the living room into the kitchen. The next thing I remember was just kind of falling and passing out.”

“A sequence of amazing things happened in a very short amount of time,” says her husband, Neil Pappone, who immediately dialed 911. Emergency Medical Services paramedics arrived at their apartment one mile north of Columbia and began treatment that included intubation. Unconscious but stabilized, Ms. Carlock was then transported to Columbia, where Dr. Williams waited in the Emergency Department. After a series of CT scans to locate the blood clot, Dr. Williams ordered the administration of IV tissue plasminogen activator (tPA). Within minutes Ms. Carlock’s vital signs improved dramatically.

“I stayed with Ruth-Ann during the night,” says Mr. Pappone. “Staff woke her every 30 minutes to go through a series of tests like moving her arms. Then I saw a miraculous recovery occur between 11 pm and about 6 am. I can’t even describe the phenomenal transition that happened in that period of time. Some people say it’s a miracle and some say it’s the magic of science combined with perfect timing. But had we not been near this particular hospital that has this kind of innovation in stroke, I’m convinced the outcome would have been very different.”

More than a year and a half since her stroke, Ms. Carlock is well recovered save for some minor issues with word retrieval. “Each day brings me a new opportunity to enjoy life, whether its reading a new book, going to the movies, visiting a museum, or taking a walk,” she says. 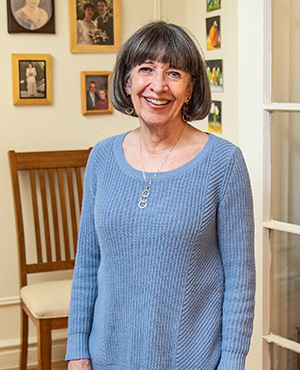 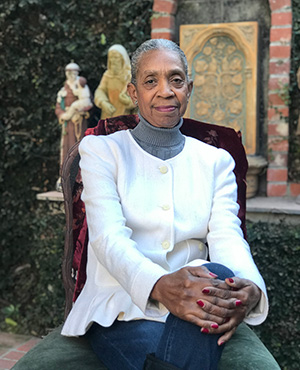 Goal #3: Have Advanced Care at the Ready

Fortunately, Ms. Carlock’s clot dissolved with tPA, but had she required a thrombectomy, the Acute Stroke Services team was prepared. “Great advances are being made in endovascular thrombectomy, particularly in select patients with occlusions of the more proximal vessels in the anterior circulation of the brain,” says Dr. Williams. “Those particular strokes have the highest mortality and the highest morbidity. Traditionally, the window for treatment of large stroke syndromes was up to six hours. However, some patients have a slow progression of cell death as a result of stroke and can have large parts of their brain remain salvageable. With the perfusion imaging techniques that we have now, we can select those patients that will benefit from extended window treatment for out to 24 hours. That’s a huge, almost meteoric, development in stroke treatment.”

“We’ve participated in several randomized trials that have proven the value of performing endovascular therapy for select stroke patients,” says Dr. Navi. “The National Institutes of Health DEFUSE 3 trial — of which both Weill Cornell and Columbia were enrolling sites — has shown the benefit of late thrombectomy from 6 to 24 hours post onset of a large vessel occlusive stroke. These trials demonstrated that through either a mismatch between completed stroke on MRI versus the clinical severity of deficits on physical exam, or through CT or MRI perfusion imaging, you can establish that a patient has a large area of the brain tissue at risk for completing to a full stroke. If you intervene and open up the artery before that occurs, you can substantially reduce the odds of serious, long-term disability and even death.”

In January 2018, the American Heart Association and American Stroke Association updated the ischemic stroke guidelines, expanding the treatment window from six to 24 hours based on the results of the DAWN and DEFUSE 3 trials. “The more patients that we can treat with these interventions, the better their outcomes will be, which ultimately will lead to fewer disabled individuals in the community,” says Dr. Navi, noting that the Columbia and Weill Cornell stroke programs have modified NewYork-Presbyterian’s stroke guidelines by implementing treatments up to 24 hours.

The ability to treat more patients with stroke, says Dr. Williams, has led to paradigm shifts in thinking about stroke treatment and system-wide retooling of triage processes. “Patients with large vessel occlusions can be triaged to hospitals that have the ability to not only perform the imaging required but are also able to provide advanced treatment opportunities.”

“After intravenous thrombolysis and mechanical thrombectomy to treat acute ischemic stroke, the next critical phase is secondary prevention, particularly of early recurrent stroke,” says Dr. Navi. “On average, the one-year risk of stroke recurrence is about 5 percent and half of that risk is in the first three months.”

There recently has been a surge of interest in using more aggressive blood-thinning strategies in the first couple of months in order to reduce the risk of stroke further, says Dr. Navi. “We have data from older trials that show, besides patients with atrial fibrillation, if you give patients multiple blood thinners, for example, aspirin plus clopidogrel, or very strong anticoagulants for a few years after ischemic stroke, there is no net clinical benefit. This is because any long-term reduction in the risk of a recurrent ischemic stroke is counterbalanced, or sometimes even outweighed, by the risk of bleeding, including bleeding in the brain, which can be catastrophic.” The NIH-funded POINT trial, an international study in which both Weill Cornell and Columbia were enrolling sites, evaluated whether antiplatelet therapy with clopidogrel and aspirin could reduce the rate of recurrent stroke during the first three months after a minor ischemic stroke or TIA compared to aspirin alone.

Bettye Ann Shields had a TIA in 2013. Her symptoms came on gradually, beginning as pins and needles in her right foot. “The pins and needles continued, and in a few minutes, my right arm felt a little limp. I didn’t have a grip,” recalls Ms. Shields. “In my mind, I thought, oh, my God, I hope I’m not having a stroke.”

In the emergency room at NewYork-Presbyterian/Weill Cornell, Ms. Shields was diagnosed with a TIA and was introduced to Dr. Navi for further evaluation. With the diagnosis in hand, Dr. Navi asked her to participate in the POINT trial. “This trial showed that patients randomized to aspirin and clopidogrel were about 25 percent less likely to develop another stroke versus patients who were randomized to aspirin alone,” says Dr. Navi, who served as site Principal Investigator. “That’s a powerful risk reduction and intervention. We were proud to participate in that landmark trial.” Results of the study were published in the July 19, 2018, issue of The New England Journal of Medicine.

To identify the indeterminate source of Ms. Shields’ TIA, Dr. Navi had her undergo prolonged heart rhythm monitoring via an implantable loop recorder. “I diagnosed Ms. Shields with atrial fibrillation, uncovering the likely source of her TIA but only after extensive monitoring. Identifying her stroke mechanism enabled me to target her precise pathophysiology, which should translate into a reduced recurrent stroke risk for her.”

“I’ve been feeling good,” notes Ms. Shields. “But I do go to Dr. Navi every six months because I want to stay on top of it. This is my body, I only get one, and there’s no second chances.”

Can Stroke Expose a Cancer Diagnosis?

Most recently, Dr. Babak Navi and his colleagues in both neurology and oncology undertook a study evaluating the risk of arterial thromboembolism before cancer diagnosis. The results, published December 21, 2018, in the journal Blood, showed that the increased risk of stroke or heart attack begins five months before cancer is officially diagnosed and peaks in the month prior to diagnosis. Older adults with cancer are nearly 70 percent more likely to suffer a stroke or heart attack in the year prior to their diagnosis compared with peers without a cancer diagnosis in that same time period.

“These data suggest that some cardiovascular events may be triggered or potentially even caused by occult cancer,” says Dr. Navi, who was first author on the paper. “If we can identify patients at highest risk of harboring occult cancer, we can determine the utility of screening them to help diagnose their cancers earlier, which could translate to better outcomes.”

While more research needs to be done, Dr. Navi says the findings should prompt doctors to be vigilant for potential symptoms or signs of cancer in patients who have recently experienced heart attack or stroke.