Always striving to improve surgical outcomes, the Department of Orthopedics has developed standard protocols for minimizing risk of infection. With strict adherence to protocols, the Foot and Ankle Service at Columbia has achieved a surgical infection rate of about 1 percent in the last 2,000 surgeries. This statistic includes patients with significant trauma and comorbidities, which traditionally carry much higher rates of infection.

With strict adherence to protocols, the Foot and Ankle Service has achieved a surgical infection rate of about 1 percent in the last 2,000 surgeries. 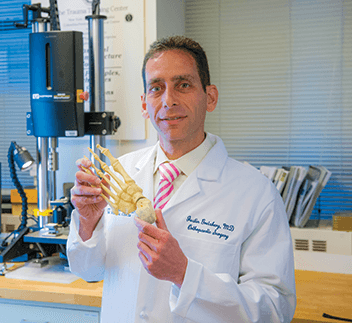 Perhaps the most powerful surgery for correcting the arch collapse in the adult acquired flatfoot is lateral column lengthening. This procedure can bring the arch back without the stiffness that accompanies a hindfoot fusion. With more than 15 years of experience performing this procedure, Columbia surgeons are looking for ways to make this good surgery even better. The standard technique requires structural bone graft from the pelvis. For many years, our surgeons have tried going to the proximal tibia, just above the foot, to avoid the morbidity of iliac crest harvest. When they looked back at their large database of patients, they found that the proximal tibia bone is not as durable. However, they also found that an allograft bone graft worked well and entirely eliminates the morbidity of graft harvesting.

In the Biomechanics Laboratory, Columbia foot and ankle specialists are looking at the ramifications of altering the mechanics of the hindfoot joints with lateral column lengthening. Recognizing that lateral column lengthening is, at its essence, the creation of a second deformity to compensate for the collapsed arch, our surgeons are looking at developing a technique to reconstruct the spring ligament.

Many patients with articular fractures develop post-traumatic arthritis despite excellent treatment. Death of chondrocytes in the cartilage may be the cause. Columbia researchers are investigating the mechanisms of chondrocyte death in post-traumatic arthritis and developing strategies to preserve chondrocyte vitality. More than just restoring mechanical alignment, our surgeons are also seeking ways to grow the cartilage and promote recovery from injury.

Foot and ankle injuries are some of the most common to sideline an athlete, yet there are no clear standards for determining safe return to competition. To this end, our surgeons have developed a series of ankle “tests” and defined normal ranges of performance. The tests can be performed quickly on the sidelines and do not require pre-injury baseline measurements. They are now developing standardized assessment criteria for return to play. 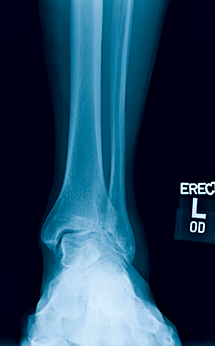 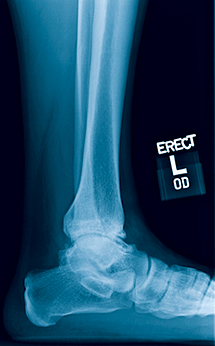 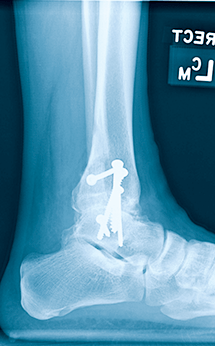 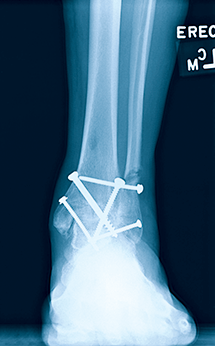 The patient chose to undergo ankle arthrodesis, which healed uneventfully, with good pain relief and good function for years. Ankle morphology (including the fibula) was preserved, which is essential if ever considering conversion to ankle arthroplasty. 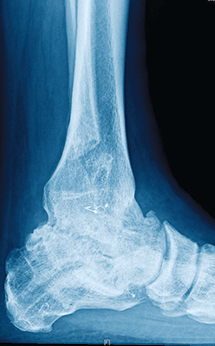 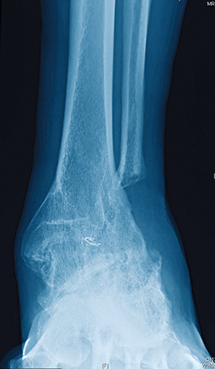 Ten years later, he presented to another institution with lateral hindfoot pain. Several rounds of surgery there left the patient with a segment of fibula resected (for unclear reasons) and a nonunion of a subtalar fusion. He had two failed attempts at subtalar fusion. Subtalar fusions heal well in general, but nonunions are definitely more common in the setting of previous ankle fusion. 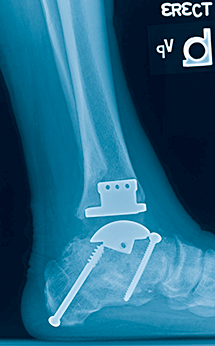 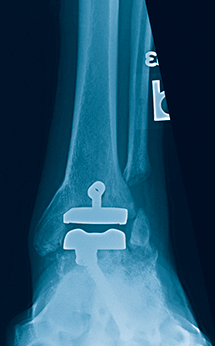 With the patient frustrated by the increasing stiffness and pain, we chose for takedown of the ankle fusion and revision subtalar fusion. The resected bone from the ankle arthroplasty provided ample bone graft for the subtalar fusion, and the improved motion spared the talonavicular joint from further stress.

The patient is now three years out from ankle replacement and is back to hiking in the woods recreationally.