Expanding the Boundaries of Immunotherapy

While several immune checkpoint blockers have achieved unprecedented clinical success and been approved for the treatment of a growing number of malignancies, it has become increasingly evident that immunotherapy has its limitations in treating the greater population of patients with cancer. This has led to a shift in focus from single arm immune-based therapies to the development of combination treatment regimens.

Clinician-researchers at Columbia and Weill Cornell continue to make headway in understanding the role of the immune system in tumor immunogenicity, pursuing research to better understand the processes that promote tumor growth and exploiting the influence of the immune system to recognize and eradicate cancer cells. Clearly, immune checkpoint inhibitors can restore the immune system’s recognition of cancer cells and have led to dramatic responses in a number of cancer types. Our researchers are now seeking a better understanding of why and when the responses are less than satisfactory and exploring approaches that can further advance the application of immunotherapeutics.

Clearly, immune checkpoint inhibitors have led to dramatic responses in a number of cancer types. Our researchers are now seeking a better understanding of why and when the responses are less than satisfactory. 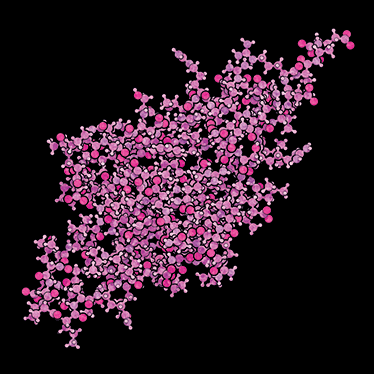 NSCLC: Identifying the Source of Sensitivity and Resistance

With the observation that tumor types that responded to immunotherapy were those expected to have the most DNA damage, such as tobacco carcinogenrelated lung cancer and UV light damage-related skin cancers, Columbia scientists postulated that these tumors have a significant burden of foreign proteins that were not being recognized.

They further postulated that restoring T-cell responses with immunotherapy would activate tumor rejection. Sequencing the exomes of tumors from patients with non-small cell lung cancer (NSCLC) treated with pembrolizumab, the researchers showed those with a higher nonsynonymous mutation burden exhibited improved durable clinical benefit. They also were the first to demonstrate a CD8+ T-cell response to a predicted neoantigen in peripheral blood that paralleled response to anti-PD-1 therapy and contributed to immunotherapy resistance (Science 2015).

The HLA Role in Tumor Response 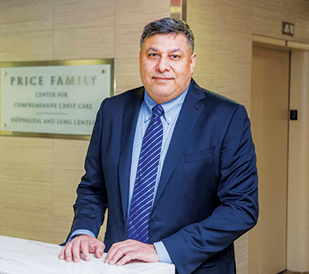 Major histocompatibility complex (MHC) class I and class II proteins play a pivotal role in the adaptive branch of the immune system. The human MHC is also called the HLA (human leukocyte antigen) complex. Both classes of proteins share the task of presenting peptides on the cell surface for recognition by T-cells. The main function of the MHC gene is clearing infection and thereby survival of species. HLA class I genotype has been repeatedly associated with modulating the immune response during bacterial or viral infection, in°ammatory conditions, and autoimmune diseases. A population with diverse alleles of HLA classes I and II leads to resistance to infection and a survival advantage.

Ionizing Radiation: Making the Tumor Its Own Worst Enemy 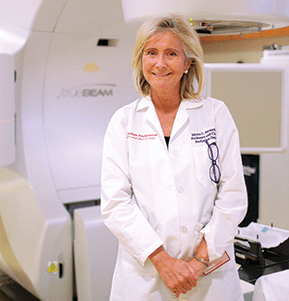 Researchers in the Department of Radiation Oncology at Weill Cornell are at the forefront of investigations demonstrating that local radiotherapy can contribute to immune rejection of cancer. Through a mechanism called the abscopal effect, some patients with metastatic tumors who receive radiation to one metastatic site and immunotherapy can reject other metastases that were not irradiated. The effects are superior to that of immunotherapy alone.

The researchers were the first to introduce the idea to use ionizing radiation during immunotherapy to convert the tumor to an in situ vaccine, individualized and capable of immunizing the patient against micrometastases or established metastases.

An important research finding that has emerged in the last six months at Weill Cornell is the convergence of the DNA damage response with the immune system, particularly in tumors treated with DNA-damaging agents such as radiotherapy or platinum compounds.

Building on concurrent laboratory work, the research team is refining how to enhance the abscopal effect by studying the immunological effects of radiotherapy. 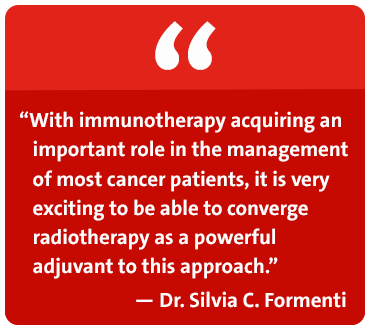 Four investigator-initiated clinical trials are open and three others will soon be evaluating the combination of ionizing radiation and immunotherapy for specific tumor sites.

This work is making important strides in defining an additional role for ionizing radiation in cancer therapy – one in which it enhances the clinical benefit of current immunotherapy agents.