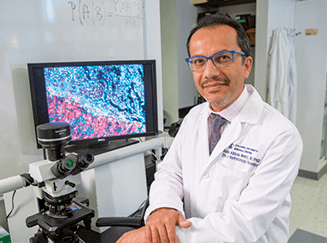 Columbia researchers are conducting preclinical combination immunotherapy studies on genetically engineered mice with pancreatic cancer, which unlike other cancers, in most cases does not respond to mono-immunotherapy. It is thought that the highly immunosuppressive tumor microenvironment within pancreas cancer does not allow immunotherapy to be effective as a single agent. 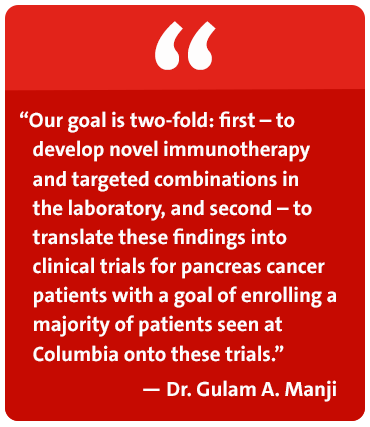 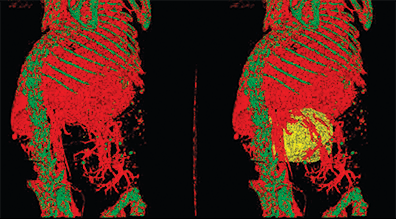 Utilizing the PerkinElmer Quantum FX micro-CT, researchers have many imaging options, enabling them to see, for example, the entire vascular system of a mouse abdomen. In this image, an abdominal tumor is revealed (yellow) that left a void in the abdominal vasculature. 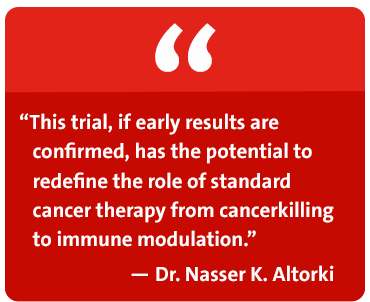 In an effort to increase response rates to immunotherapy with single agent immune checkpoint blockade, the emerging trend is to combine two immunotherapy drugs, each blocking a different checkpoint. This combinatorial strategy, though scientifically valid, has been associated with an increase in the side effect profile. Therefore, there is a need to investigate alternative methods that enhance the effects of immunotherapy without a significant increase in side effects. One such approach, currently under investigation by Weill Cornell researchers, is to combine immune checkpoint blockers with low dose radiation – not to kill cancer cells, but rather to reprogram the immune cells within the tumor and produce a more vigorous anti-tumor response.

To this end, they are currently conducting an investigator-initiated, window-of-opportunity clinical trial in patients with early stage lung cancers who would ordinarily be treated with surgery or chemotherapy followed by surgery. In this trial, prior to surgery patients are given a very small dose of radiation combined with the immune checkpoint blockade. Following surgery to remove the tumor, treatment with the immune checkpoint alone is continued for one year. Having access to the tissues before and after surgery makes it possible to examine the tumor for evidence of a cancer-killing immune response and to discover biomarkers that would be useful in future refinements of this approach.

The researchers are cautiously optimistic about the results shown in both animal models and patients with lung cancer. The approach has the potential to be practice changing – since it utilizes radiation at much lower doses than is common practice with much lower frequency of side effects. Their hope is that this will redefine the role of standard anti-cancer treatments such as high-dose radiation therapy used for cancer-killing to low dose immune-modulating radiation. Weill Cornell researchers will also investigate serial measurements of circulating tumor DNA as a real-time marker of response to treatment.

For some 30 years, there had not been any drugs beyond chemotherapy approved for second-line treatment of bladder cancer. In the last two years, the FDA has approved five immuno-therapeutic agents, yet the challenge to treat bladder cancer remains. Among patients treated with any of these five new drugs, only one out of five will respond. Bringing together experts in precision medicine, immunology, and genitourinary oncology, Weill Cornell’s world-class bladder cancer research program encompasses a multi disciplinary team of physician-scientists who span the basic, translational, and clinical research arenas. The cornerstone of the program is a basic science laboratory, one of the few in the country dedicated to bladder cancer research. It is supported, in part, by a prestigious grant awarded to Bishoy M. Faltas, MD, from the Department of Defense’s Congressionally Directed Medical Research Program, which for the first time has added bladder cancer to its list of fundable areas.

Dr. Faltas is an oncologist in the Genitourinary Oncology Program in the Division of Hematology and Medical Oncology at Weill Cornell. The work of the laboratory focuses on understanding the biology of the disease as the key to progress in identifying the next generation of therapeutic advances for patients with bladder cancer. 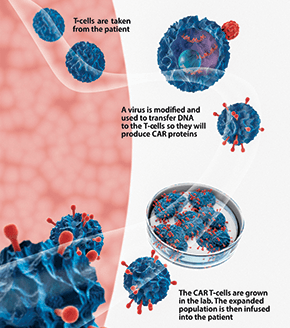 The hypothesis is that chemotherapy drugs cause breaks to form in double-stranded DNA, exposing single strands of DNA during the repair process. These exposed strands are then bound and mutated by the APOBEC3 proteins in bladder cancer cells. Ongoing studies in the new bladder cancer research program will dissect the mechanisms that drive the evolution of bladder cancer and resistance to therapy with the ultimate goal of translating these results to new treatments for patients.

Columbia and Weill Cornell researchers have conducted significant foundational work in T-cell-based cancer treatments in the lab and with patients, with the goal of bringing T-cell therapies to patients with a wide range of cancers. Chimeric antigen receptor (CAR) T-cell therapy is one such approach, engaging an individual’s own immune cells to treat cancer, and, in particular, hematological malignancies. In CAR T-cell therapy, T-cells are obtained from the patient and with genetic engineering, these cells are trained to identify, attack, and kill cancer cells. With the first ever FDA approval for a CAR T-cell therapy, (CTL019), in August 2017 for children and young adults with relapsed or refractory β-cell acute lymphoblastic leukemia, interest in this first-in-class therapy has intensified. 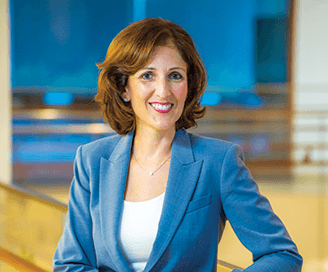 The first-in-human administration of UCART123 in acute myeloid leukemia (AML) is underway in a phase 1 clinical trial at Weill Cornell Medicine. This marks the first allogeneic, “off-the-shelf” gene-edited CAR T-cell product candidate targeting CD123 to be investigated in clinical trials. The clinical trial will investigate the safety and efficacy of UCART123 in patients with AML, a devastating clonal hematopoietic stem cell neoplasm characterized by uncontrolled proliferation and accumulation of leukemic blasts in bone marrow, peripheral blood and, occasionally, in other tissues. These cells disrupt normal hematopoiesis and rapidly cause bone marrow failure.

While complete response rates can be as high as 80 percent in younger patients who undergo initial induction cytotoxic chemotherapy, the majority of AML patients relapse and die from the disease. AML patients with high-risk genetic features have an especially urgent unmet medical need, as their outcomes are dismal with all existing treatment modalities. Weill Cornell researchers are hopeful that this novel immunotherapy modality will prove to be a significant and effective weapon against AML. 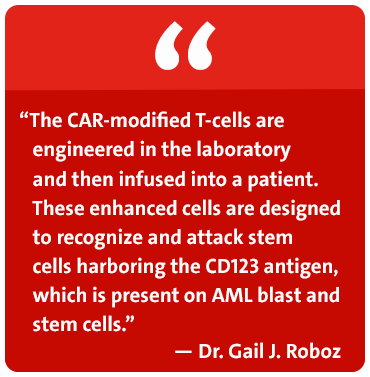 In the first demonstration of the potential for CAR T-cell immunotherapy for previously untreatable anaplastic thyroid cancers (ATC), researchers at Weill Cornell were able to eliminate cancerous cells in cultures and mice. Investigators are now hoping to validate their findings in human trials in 2018. Targeting the intercellular adhesion molecule-1 (ICAM-1), which has an increased expression in ATC tumors, Irene M. Min, PhD, Assistant Professor of Molecular Biology Research in Surgery, harvested T-cells from human patients and encoded the cells to seek out ICAM-1 to attack the tumor (Clinical Cancer Research 2017). The researchers found that a single dose on thyroid cancer cells in a mouse model mediated significant tumor killing with a 100-fold reduction in primary tumor burden compared to pre-treatment.

The ICAM-1 CAR T-cells were also injected into mice engrafted with human tumor samples. The tumors were in most cases completely eliminated and the mice thrived, with no significant toxicity, presenting an opportunity for patients with advanced thyroid cancer who have no other options. The researchers noted that high expression of ICAM-1 has also been observed in many other cancers, and linked to metastasis, so the implications of the study could be far reaching. In collaboration with Moonsoo Jin, PhD, Associate Professor in the Department of Radiology, a lower affinity of CAR T-cells to ICAM-1 were developed to make them more selective to cancer cells with limited off-target toxicity (Scientific Reports 2017). The researchers teamed up with Thomas J. Fahey, III, MD, Director of the Endocrine Oncology Program at Weill Cornell, along with hematologists, radiologists, and other clinicians to develop a phase 1 clinical trial.