The Power & Potential of Patient-Derived Organoids 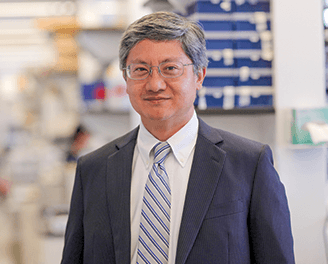 The mutation profile of a patient’s cancer will not always predict whether or not it will respond to a specific drug. Additionally, clinical trials frequently are developed based on testing of cell lines in preclinical models, and often trials fail because cell lines in mice may not recapitulate what is occurring in a patient.

To reconcile these two challenges, researchers at Columbia University Medical Center and Weill Cornell Medicine are incorporating more clinically relevant model systems to test drugs that could reap more targeted benefits for patients. Specifically, they are growing organoids from patient tumors and adjacent normal tissue, which greatly narrow the field of drug testing and response for an individual patient with a particular tumor. Their work is taking cancer research in an extraordinary direction, and providing scientists and clinicians with the power to ask questions that they have never been able to ask before.

A Sea Change in Treatment Approach 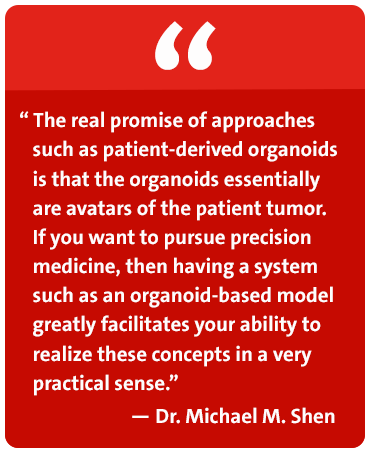 With an organoid, you can try a thousand different drugs, which multiplies information about clinical response in a way that you can’t do in a typical patient. Weill Cornell scientists in the Englander Institute for Precision Medicine seek to establish, using a very large number of organoids, connections between the presence of a mutation or other molecular alteration and a response to that particular molecule across tumor types that will fundamentally change routines when identifying better treatment options for patients. They will then be able to determine whether a particular alteration correlates with a response to a particular drug even in the absence of an obvious mechanistic connection.

Organoids and Genetics: A Powerful Combination

A study led by Weill Cornell investigators has shown that combining genetic information from a patient’s tumor cells with three-dimensional cell cultures – tumor-derived organoids grown from these tumors – markedly accelerates the identification of potential therapies compared with current approaches. Published in the March 22, 2017, issue of Cancer Discovery, the study demonstrates the capability of growing a wide variety of tumors outside of the body, allowing researchers to not only obtain full exome and RNA sequencing data, but also to test a panel of approved drugs on the same tumor that is growing in the patient. Combining genome sequencing with rapid drug screening makes it possible to nominate new therapies for patients that could not have been predicted from the genomics alone.

Over the past several years, organoid models have grown in popularity for a number of reasons. These include the advantage of having a combined in vitro and in vivo system able to mimic much of the architecture of patient tissue in a histopathologically accurate manner, thereby overcoming some of the limitations associated with preclinical models. For the past two years, scientists at Columbia have been generating organoid models of bladder cancer from human patient samples in collaboration with colleagues in the Department of Urology, applying approaches and concepts from stem cell and developmental biology to a translational problem. Modifying methodology that they developed for mouse prostate organoids, they have been able to grow human bladder organoids, recapitulating human bladder cancer at both the histological and molecular spectrums. To date, they have established 20 independent lines from patients with noninvasive and muscle-invasive bladder cancer that capture both common and rare mutational events.

Their next step is to pursue co-clinical trials with physicians in which organoids will be created from patients enrolled in the clinical trial. Both the patient and the organoid will be treated with the same drug to answer whether the responses observed with the organoids in the laboratory resemble the patient responses to the same drug. This type of co-clinical trial could be extremely informative and necessary in order to make treatment predictions based upon work on organoids. In the case of bladder cancer, the organoids can be tested with a panel of compounds already FDA approved. A research team at Weill Cornell has developed the first stem-cell-based large intestine tissue system for modeling human colon disease for drug testing. Through a variety of steps, including genomic DNA sequencing and gene expression profiling, the investigators were able to grow large intestine cells with two different FAP mutations, FAP8 and FAP9. They also determined that the gene, APC, which, when mutated, allows FAP cells to grow out of control, was inactivated. For comparison, the team created colonic organoids using stem cells derived from a person without FAP.

When the researchers tested the colonic organoids with drugs to measure response, they found that XAV939 and rapamycin significantly curbed cell proliferation, but they also had the potential to harm healthy colon tissue. A third drug, geneticin, successfully restored normal growth in the FAP9 organoids, yet had no impact on the FAP8 or healthy control organoids. Their results demonstrate that this platform can be used to model colon cancer and identify precision medicines that may work to target specific genetic mutations driving the disease. 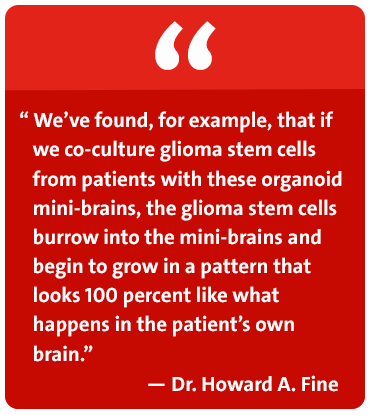 For decades scientists have tried to model malignant brain cancers using patient-derived tumor cell lines cultured in lab dishes or human tumor cells implanted into the brains of mice. These traditional approaches have not been sufficiently representative of clinical disease, a major reason for the lack of success therapeutically. To address this, Weill Cornell researchers are using advanced stem cell techniques to grow cerebral organoids – large clusters of functional and interconnected human brain cells – in the laboratory.

With cerebral organoids, the research team is able to observe the physical networks of microtube structures that connect the individual tumor cells of some gliomas. The networks appear to have a profound impact on the ability of these tumors to resist chemotherapy and radiation. In October 2017, renowned neurooncologist Howard A. Fine, MD, Director of the Brain Tumor Center at NewYork-Presbyterian/Weill Cornell Medical Center, was awarded a five-year, $6 million National Institutes of Health Director’s Pioneer Award for brain cancer research. With this support, Dr. Fine and his Weill Cornell colleagues are now working on enhancing the realism of their organoid models by adding two vital components: blood vessels with key properties of cerebral vessels and immune cells that normally reside in or can enter the brain. 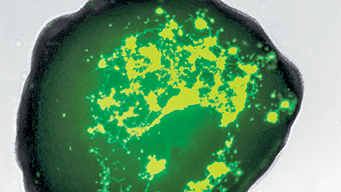 Targeting therapeutics for pancreatic ductal adenocarcinoma is particularly challenging because 80 to 90 percent of the tumor mass is fibrous tissue, making it very difficult to study the biology of the cancer cells. There is ample evidence in the literature that an organoid culture system supports the proliferation of normal and malignant primary pancreatic ductal cells of both mouse and human origins.

Columbia scientists have established a pancreatic cancer research laboratory pursuing translational therapeutics with a laser focus on pancreatic ductal adenocarcinoma (PDA). R01-funded investigations include studies in genetically engineered mouse models to determine the efficacy of drugs and their mechanisms of action in pancreatic cancer and building a related clinical trials program at the phase 1 and phase 2 levels.

In collaboration with computational biologists, the researchers are developing datasets for pancreatic cancer that have not existed in the public sphere and which are already beginning to inform nearly every aspect of their experiments. Their goal is to deploy a precision medicine framework for the treatment of PDA incorporating patient-derived organoids. 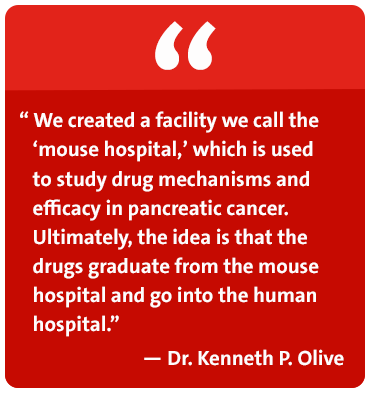 Comprehensive analysis of murine pancreatic organoids has revealed genes and pathways that have been altered during the progression of pancreatic cancer. Many of these protein changes have been confirmed in human tissues, demonstrating that organoids provide a practical system for examining the molecular and cellular properties of neoplastic progression in mice and humans. The underlying chemical dynamics of pancreatic cancer have already been uncovered in research conducted by Christine Chio, PhD, a Columbia scientist, during her postdoctoral research fellowship in the Tuveson Lab of Cold Spring Harbor Laboratory.

Columbia researchers are currently engaged in a number of investigations with the potential to develop therapeutic options for this lethal disease using genetically engineered mouse models, ex vivo organoid coculture systems, and patient-derived organoid transplantation models. They will use these models to establish a discovery pipeline and in vivo validation platforms that will facilitate the design of integrated intervention strategies for pancreatic cancer and address the complex interactions between the tumor and the stroma.