Despite the increasing number of women entering medical and graduate school, women make up only 6.1 percent of fully accredited practicing orthopedic surgeons in the U.S., a statistic that compelled William N. Levine, MD, Orthopedic Surgeon-in-Chief, to change that paradigm within Columbia’s Department of Orthopedic Surgery. Since becoming Chair five years ago, Dr. Levine has continued to increase the number of women faculty and the number of women entering Columbia’s orthopedic residency and fellowship programs. “Slowly but surely our department is approaching the statistics of medical schools where women number 52 percent. We’re at about 30 percent now,” he says.

“I grew up in a family with very strong women,” notes Dr. Levine. "My mother was a Supreme Court judge, the first in the state of North Dakota. My two sisters were very successful – one in medicine and one in business. I am also married to a Brooklyn Supreme Court judge and our oldest daughter is applying to medical school right now. This is what has informed my perspective and personal view of the workplace.”

“When I became Chair, there was a huge push to increase diversity in orthopedics, not just females, but underrepresented minorities as well,” continues Dr. Levine, who notes his goal was not to hire women per se, but to seek the “best and the brightest people” and if he had the opportunity to hire outstanding women, he would do so. 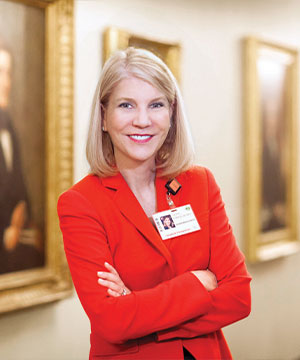 Dr. Levine attributes part of the gender disparity in orthopedics to the lack of female role models. “We’ve always been known as having a women friendly program despite not having many female faculty,” he says. “But when it came time to mentoring our young women residents from a female perspective, we really couldn’t do that. So, I asked Dr. Beth Shubin Stein, a Columbia orthopedics alumna who serves on the sports medicine faculty of Hospital for Special Surgery, if she would serve as a de facto mentor…providing women residents with someone to talk to about the unique qualities of being a female in a male-dominated surgical specialty. Today we have all of the mentorship internally, which was our goal.”

In other efforts to increase the pool of women who might be interested in pursuing a career in the field, the department has partnered with The Perry Initiative to host outreach programs for female high school students and medical students. The Perry Initiative, named for Dr. Jacquelin Perry, who was among the first women orthopedic surgeons in the country, is committed to inspiring young women to be leaders in orthopedic surgery and other science, technology, engineering, and mathematics fields. Dr. Christen Russo, pediatric orthopedic surgeon at NewYork-Presbyterian Brooklyn Methodist Hospital, has been instrumental in bringing The Perry Initiative to NewYork-Presbyterian/ Columbia. The department also promotes professional development of women in orthopedics through the Ruth Jackson Orthopaedic Society.

“We’ve had a long, strong history of influential women in our department, including Dr. Laura Forese, an alumna of our training program, who is now Executive Vice President and Chief Operating Officer of NewYork-Presbyterian,” says Dr. Levine.

“I do think that it’s important for women to look for residency programs like Columbia that have proven track records in supporting and promoting female physicians.”

“I was one of the first women accepted into the orthopedic residency program,” says Dr. Forese. “There were very few women in the field. It was a very competitive atmosphere and, at the time, I would say that the challenge is part of what attracted me. My peers were excellent, and I was treated very respectfully as a woman in the program.”

Dr. Forese also was the first woman in the program to have a child during training. “The program had never had any mothers. Fortunately, when I told my Chair I was pregnant, he said, ‘OK, we’ll figure it out.’ I actually got a maternity leave, which was anything but standard at the time since no one had done it before. This is still a conversation going on today in and outside of orthopedics about making medical specialties more friendly to women who are of childbearing age. This is a big issue for women.” 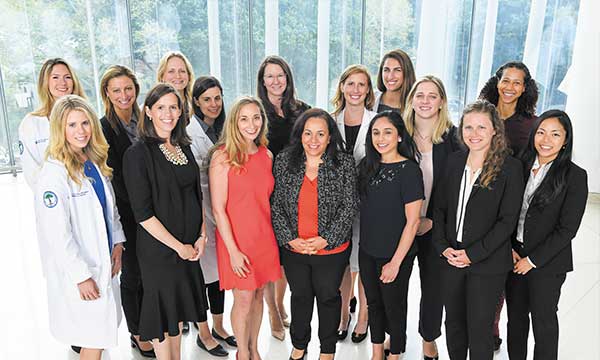 Dr. Forese offers advice to young women who are considering entering orthopedics today. “It’s a great field and extremely rewarding, but I do think that it’s important for women to look for residency programs like Columbia that have proven track records in supporting and promoting female physicians and where you can envision yourself being successful.”

“Dr. Levine has made a huge effort in recruiting women over the last few years. He’s been wonderful about giving women equal opportunities,” says Morgan A. Busko, MD, a primary care physician in shoulder, elbow, and sports medicine. “We all feel extremely valued and welcomed. The department has also increased the number of female residents, which I think is immensely important. There’s great camaraderie among the women in the department knowing that we are fully supported and that others want us there.”

“Women who choose orthopedics were either an athlete themselves, had their own injury and experience with orthopedic surgeons as a patient, or somebody in their family is an orthopedic surgeon. I answer yes to all three,” says Lauren H. Redler, MD, an orthopedic surgeon specializing in adult and pediatric sports medicine. “I had early exposure to the field, which is why I believe programs like The Perry Initiative are so important. Young women otherwise wouldn’t know that orthopedics is a possibility for them.”

“I’ve been very fortunate because Dr. Lauren Redler has been a mentor to me since day one,” says Elizabeth R. Dennis, MD, MS, a PGY-5 resident. “She has guided and helped me throughout medical school and residency. I think we will all feel elated when the distinction of being a woman or an underrepresented minority in orthopedics is synonymous with simply being an orthopedic surgeon. That’s one of the reasons I am serving on a diversity work group for the American Academy of Orthopaedic Surgeons, which is helping to raise awareness amongst members about all of the different types of people who make up and contribute to our community of orthopedic surgeons.”

“ We have to acknowledge that the generation before us took the first step that we’re now following, and that will help us to make it a bit easier for the next generation.”

“I recently spoke to someone at a professional meeting who was surprised that I am an orthopedic surgical oncologist,” says Wakenda K. Tyler, MD, MPH, Chief of Orthopedic Oncology. “He asked if I felt I was physically capable of working in this field. I told him, ‘Orthopedics is not about brawn. It’s about brain, and if you’re using your brawn to get something done, you’re probably doing it wrong.’ He stepped back and said, ‘You’re right.’ So, I think we’ve got a way to go before women are seen as equal to men, but we’ve made strides in the last 15 to 20 years. Every generation is a step in the right direction. We have to acknowledge that the generation before us took the first step that we’re now following, and that will help us to make it a bit easier for the next generation.”