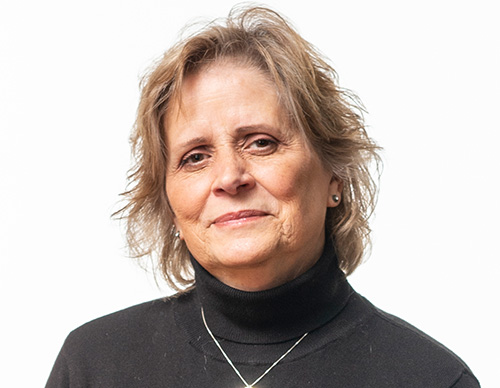 I knew this would be the hospital and medical team that would make me well again.

Jill Vallaro, 66, was working as a senior sales support administrator for an international education company in 2011 when she began having trouble swallowing. Coupled with pain in her chest, she thought it was just the stress of a busy job, which required her to travel extensively. A visit to her gastroenterologist in White Plains, New York, however, showed something more serious: her esophagus was almost completely blocked. "It looked like an overcooked donut with no hole," says Jill.

A biopsy showed she had esophageal cancer. Her doctor referred her to the thoracic surgery team at NewYork-Presbyterian/Columbia University Irving Medical Center, where doctors performed a PET scan to assess the cancer. A stream of physicians came into her room, one after the other, to discuss how to treat her.

"I remember that morning feeling so scared about the treatment and about my future," Jill recalls. "And then Dr. Joshua Sonett, the thoracic surgeon, came in with a big smile, sat on the side of my bed, looked me straight in the eyes, and said, 'I don't want you to worry about this. You let me worry about it.' And from then on, I knew this would be the hospital and medical team that would make me well again."

With the official diagnosis made in May 2011, Jill's treatment began with chemotherapy and radiation therapy before surgery — directed by Dr. Mark Stoopler — to shrink the tumor over the following summer. Her husband, Ronald, came home from work every day and drove her to her treatments. She took September to regain her strength and then went in for surgery on Oct. 17, 2011. It is a date she carries with her — literally tattooed on her arm, noting she is a cancer survivor.

Dr. Sonett, Chief of General Thoracic Surgery at NewYork-Presbyterian/Columbia University Irving Medical Center, took a novel approach. Operating through her neck (leaving a scar that is now barely noticeable), he disconnected her esophagus and removed the entire organ through that incision. Dr. Marc Bessler, Chief of Minimal Access/Bariatric Surgery, made several small incisions in Jill's abdomen, and he and Dr. Sonett worked together to stretch her stomach upward and connect it to the base of her throat so it could function in place of her esophagus.

She stayed in the hospital for two and a half weeks, fed through a stomach tube while her body recovered. She needed to learn how to swallow again, thanks to the expertise of NewYork-Presbyterian/Columbia's swallowing therapists. It took her a full year to reach her new normal. Jill can now eat a normal diet.

In 2015, she began cooking a monthly lunch at the home of a friend in Cortlandt Manor who was diagnosed with colon cancer, as well as her friend's neighbor, who had breast and later pancreatic cancer. The three "Lunch Ladies" would make their favorite dishes and decided to publish a cookbook together. They met every two weeks to refine the recipes, established an LLC called The Lunch Ladies, and published their 52-page book, Stupid Simple Recipes (According to Cancer Survivors). All recipes take 20 minutes or less.

"There are a lot of people going through chemo and radiation therapy and still living their lives, and we wanted to make cooking for them as easy as possible," Jill explains. They began selling the book in local supermarkets, and sales took off when their story was featured on a local cable news network. It is sold on Amazon.

"New patients are nervous. I tell them I know what they are going through and that things will get better," she says. She offers a warm hand and a kind ear, listening to any questions they may have.

"I see my life as a gift given to me by my doctors, the hospital, and the staff," concludes Jill. "All of them cared so much about my well-being. It is such an honor for me to give back."