Glaucoma and Genetics Come Into Focus 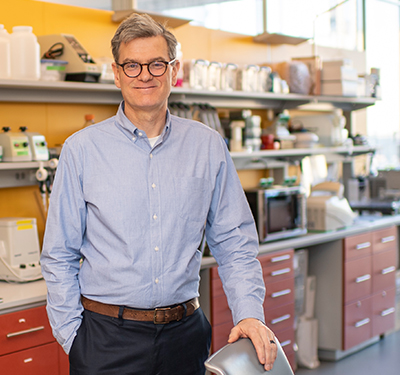 You might say Simon John, PhD, began honing his research skills at the age of seven, when, as a child growing up in Wales, he developed an interest in biology. He recalls trying to mix slides with his first microscope and accompanying his uncle to his job in a hospital pathology lab, where his introduction to science went well beyond a schoolboy’s chemistry kit. Between then and now, Dr. John graduated with high honors in Zoology and Genetics from University College Cardiff, Wales, and went on to earn his doctorate in Biology and Human Genetics at McGill University, Montreal, Canada. He quickly developed an international reputation in genetics, genomics, and ocular disease, leading to his 1998 appointment to the prestigious Howard Hughes Medical Institute at an unusually young age, being the youngest Investigator appointed at that time through its highly competitive process.

Earlier this year, the Department of Ophthalmology at Columbia University Vagelos College of Physicians and Surgeons welcomed Dr. John as the Robert L. Burch III Professor of Ophthalmic Sciences (in Ophthalmology). Here, Dr. John continues to pursue his groundbreaking research on the molecular basis of glaucoma, uniting engineering and technology with molecular, genetic, and physiologic methods to identify the genes and molecular mechanisms underlying this neurodegenerative disease.

To answer these and many other basic questions about the origins and mechanisms of glaucoma, Dr. John turns to whole animal models. Earlier in his career, he was involved in developing the technologies for changing genes in mice and generating models of more complex diseases. “I was doing molecular research in essential hypertension at the time and had not yet settled on my future career path. It was this work in high blood pressure that brought me to glaucoma. It occurred to me that some of the molecules that I was working with could be studied in mouse eyes to understand glaucoma, which had not been done before. So, even though there was a risk, I decided to start my own lab studying glaucoma. I invested in developing techniques and approaches to study glaucoma in mice. I saw it was an important niche and could open a research area where I could make a difference.”

Shortly thereafter Dr. John joined The Jackson Laboratory – the world’s premier institute in mammalian genetics and human genomics – where he remained for the next 25 years. During that time, he was presented with numerous international prizes and awards for his pioneering work in mouse glaucoma models, including the Global Glaucoma Award for his “daring breakthrough, creative, original body of work.”

Dr. John’s current research continues to tap into his enterprising approach, including studies in intraocular pressure, metabolic changes leading to glaucoma, and therapeutic targets, and the mouse model continues to play a central role. Having identified genes that cause glaucoma in mice, he and his team were able to create a control strain that lacked one of the glaucoma mutations. “We now have a wonderful control strain that is housed and aged in the same cage as the glaucoma mice, but the control mice do not develop glaucoma,” explains Dr. John. “Comparing the control and glaucoma mice maximizes our ability to define the key factors that cause glaucoma.”

Taking the Pressure Off

Glaucoma is often associated with elevated intraocular pressure (IOP). This harmful high pressure damages retinal ganglion cells resulting in a pressure-induced neurodegeneration. “The molecular processes that raise intraocular pressure and damage retinal ganglion cells are not well defined,” says Dr. John, who was the first to measure IOP in a mouse and has worked with bioengineers at Purdue University to miniaturize, implantable, wireless sensors to detect changes in IOP. “Combining genetics with genomics, cell biology, and physiology to understand glaucoma, we are identifying new genes, pathways, and aberrant processes that lead to high IOP and glaucoma to determine how high IOP damages retinal neurons and to ultimately define neuroprotection methods to shield the retinal ganglion cells.” 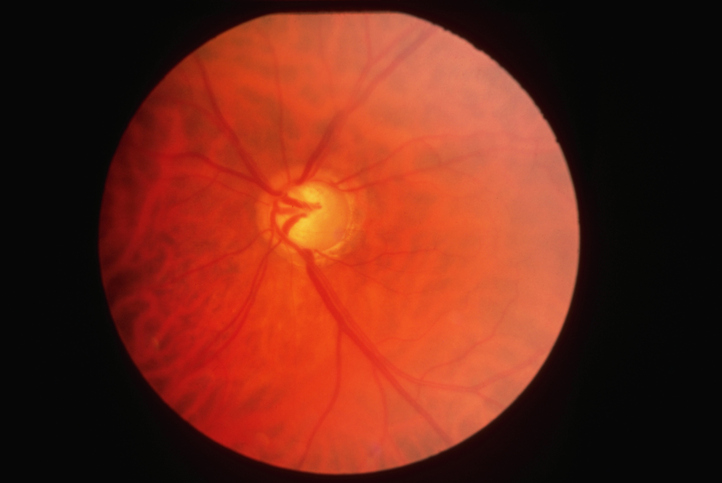 Most recently, Dr. John and his colleagues investigated the possibility that neuroinflammation at the site of the optic nerve head may be a critical pathogenic event in glaucoma, identifying further transcriptomic changes at the level of optic nerve head microglia. The study, which was conducted in the DBA/2J mouse model – a widely used model of age-related, hereditary glaucoma that recapitulates hallmark features of the human disease – identified alterations in mitochondrial gene expression as well as changes to phagocytosis, inflammatory, and sensome pathways in microglia prior to optic nerve degeneration. These changes occurred in the absence of a clear pro-inflammatory response by microglia, suggesting that early pro-inflammatory signals may largely derive from infiltrating monocyte-like cells in this model of glaucoma.

“Out of this complex set of changes, the TREM/TYROBP signaling network emerged as a potential master regulator of microglial responses to elevated intraocular pressure,” says Dr. John. “This type of response is observed in other neurodegenerative diseases where homeostatic functions of microglia are suppressed by inhibition of TYROBP signaling. The data sheds new light on the early myeloid changes in the optic nerve head following periods of ocular hypertension and offer novel targets for treatment and further mechanistic exploration.”

“Our extensive expertise in studying intraocular pressure and glaucoma in mice put us in a strong position for evaluating candidate genes,” adds Dr. John. “Modern sequencing and genome-wide approaches will identify many genetic variants that associate with disease. Although some glaucoma genes will be made immediately obvious, in many, if not most, cases a variety of candidate genes will be identified. As the DNA changes that contribute to disease will often be subtle, sequencing efforts alone will not be able to definitively distinguish the causative changes from those that are present in patients but have no consequence for the disease.”

“Our extensive expertise in studying intraocular pressure and glaucoma in mice put us in a strong position for evaluating candidate genes.”

To further this line of inquiry, Dr. John and his research team are using the DNA changes identified in patients to test the effects of specific genes on IOP and glaucoma phenotypes by studying related changes in the equivalent mouse genes. “This will simultaneously produce valuable animal models for studying molecular mechanisms of glaucoma and testing new treatments,” he notes. “These mouse experiments are very important as IOP and glaucoma are very complex phenotypes and can only be fully studied in whole animals. Our expertise in genome-wide gene expression studies will help to prioritize candidate genes for further functional analyses.”

While additional testing is necessary to determine the specific genes and functional changes that actually impact the glaucoma phenotypes, the mouse genetics experiments will identify glaucoma genes in mice that can inform understanding of the human glaucoma genes.

Another Benefit of Vitamin B3

Nicotinamide adenine dinucleotide (NAD) is a key molecule essential for healthy mitochondrial metabolism. In 2017, studies by Dr. John and his colleagues at The Jackson Laboratory and other ocular disease programs demonstrated that mitochondrial dysfunction is among the very first changes to occur within retinal ganglion cells during initiation of glaucoma in DBA/2J mice and that an age-dependent decline of NAD contributes to mitochondrial dysfunction and vulnerability to glaucoma.

“Essentially, we determined that mitochondrial dysfunction may be an important, if not essential, component of glaucoma and discovered that the retinal level of NAD declines in an age-dependent manner,” says Dr. John. The researchers hypothesized that if the decline in NAD renders retinal ganglion cells susceptible to damage during periods of elevated intraocular pressure, then NAD may provide a much needed neuroprotective treatment against human glaucoma.

“With this in mind, we wanted to find a treatment we could use in humans,” continues Dr. John. “There are many ways you might change metabolism, but if we could find something already present in the body that has been tested at high doses and has a good safety record, then using an existing molecule would give us a huge advantage in treating people at risk for developing glaucoma. If lowered NAD is important, then keeping NAD levels high should prevent the disease.”

That molecule was a form of vitamin B3 known as nicotinamide, which is converted into NAD in the body. That same year, studies by Dr. John and his colleagues in glaucoma-prone mice showed that oral administration of vitamin B3 and/or gene therapy with a key NAD+-producing enzyme was protective both prophylactically and as an intervention. At the highest dose tested, 93 percent of eyes did not develop glaucoma in this model.

“At Columbia, we have a growing interest in the role of altered metabolism in various neurodegenerations. We have established a clinical trial and will establish other studies to further evaluate the efficacy of vitamin B3 and the role of metabolism in human glaucoma.”

Dr. John and his colleagues continued to present further evidence of the neuroprotective effects of nicotinamide against glaucoma in mice, including its protection against transcriptomic changes within retinal ganglion cells and prevention of optic nerve excavation and axon loss.

“At Columbia, we have a growing interest in the role of altered metabolism in various neurodegenerations,” says Dr. John. “We have established a clinical trial and will establish other studies to further evaluate the efficacy of vitamin B3 and the role of metabolism in human glaucoma.”

“By combining his unique skills with bold experimentation and by forging close collaboration with ophthalmologists, Dr. John has been able to adapt tools from the human clinic to mice and develop novel techniques and models that provided a wealth of new mechanistic information regarding glaucoma, helping to reinvigorate the field,” says Jeffrey M. Liebmann, MD, the Shirlee and Bernard Brown Professor of Ophthalmology, Glaucoma Service Director, and Vice Chair of the Department of Ophthalmology.