It was a comfort that she'd done this rare procedure a few times. 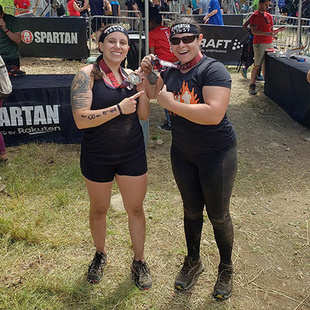 Juliana Zeolla has always been athletic. The 30-year-old fitness instructor from Peekskill, New York loved running, snowboarding, and playing ice hockey. But an old injury plagued her, making it increasingly hard to do the things she enjoyed.

“When I was 15, I tripped over a sidewalk at a construction site and landed directly on my knee,” Juliana says. The fall dislocated her right patella (kneecap). Over the years, she underwent several surgeries, but she was still in pain. “The surgeries were like band-aid surgeries, cleaning out the wound but not fixing the problem. Everyone said there wasn’t anything that could be done until I met Dr. Belkin.”

“What was most striking about Juliana is, she is very strong and muscular, but you could see her affected leg was much smaller in size than her good one because she relied so heavily on the other one, Dr. Belkin says. I think that is what sparked the conversation between us.”

Juliana scheduled an appointment with Dr. Belkin, who ordered an X-ray and MRI of Juliana’s knee to assess the problem. The imaging showed Juliana’s knee was misaligned, which caused damage to the cartilage — tissue that provides protective padding between bones.

After reviewing the MRI, Dr. Belkin told Juliana she could repair the knee, but the process would be long and arduous. Juliana would need to undergo two surgeries.

During the first surgery, which took place on November 30, 2017, Dr. Belkin removed some cartilage from Juliana’s. This was then sent to a lab and used to grow more cartilage.

“Growing cells for cartilage is not a unique thing, but it’s uncommon outside of big academic medical centers, which is why having ColumbiaDoctors in the community changes lives,” Dr. Belkin says. “A patient like Juliana goes from having the local orthopedic doctor telling her there is no solution to having someone with the knowledge and experience to offer these kinds of procedures.”

About two months after sending the cartilage off to the lab, Juliana came in for a second surgery. During this procedure, Dr. Belkin cut Juliana’s tibia (shinbone) to shift it to the correct position and implant the newly grown cartilage.

“When Dr. Belkin told me she would have to break my leg to fix, I was shocked, but I knew something was wrong and that’s what she needed to do to fix it,” says Juliana. “It was a comfort that she'd done this rare procedure a few times. You could meet other orthopedic surgeons who have never done the procedure before.”

After the surgeries, Juliana started the hard work of recovery. To ensure that the new cartilage flourished in her knee, Juliana was given a motion machine to flex the joint.

“Putting in cartilage is like putting grass seed on your lawn. You have to protect it until it gets established. Then once it’s there, it’s like a normal lawn, Dr. Belkin says. “For the first six weeks after surgery Juliana was on a motion machine to bend and straighten her knee.”

The machine would bend Juliana’s knee six hours a day with one-hour breaks to ice her knee every two hours. After six weeks with the bending machine, Juliana began physical therapy to regain strength in her leg. She is now back to work as a trainer. In June 2019, J participated in her first Spartan Race with Dr. Belkin and a group from the gym.

“Having this procedure gave me my life back. I was slowly having my favorite activities taken away from me. I gave up running, which was like ‘fine. That’s OK.’ Then I had to stop playing ice hockey, which hit hard. Then I had to give up snowboarding, which is one of my favorite things to do. It was frustrating,” Juliana says. “I got depressed. I saw no light at the end of the tunnel. Then I met Dr. Belkin. I got hopeful. Slowly, I’ve gotten back to things I love.”