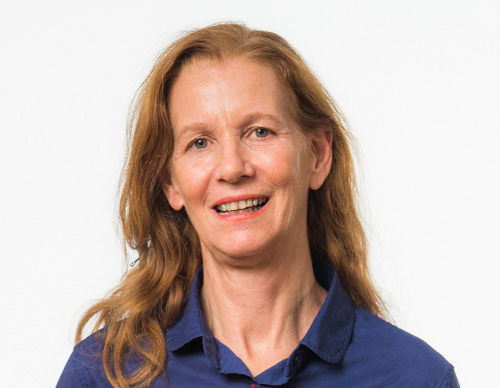 It made all the difference to hand myself over to the NewYork-Presbyterian team with total and unconditional trust.

In March of 2011, Andree Brown had a mammogram. “The doctor read the report on the spot and said, ‘There’s definitely a problem here. You can’t leave until I do a biopsy.” She was then told to call a surgeon immediately. “I didn’t know what any of that meant,” recalls Andree. “And that’s how it all started. I met with a surgeon at NewYork-Presbyterian within four days. The first thing I needed to do was to hand myself over to the NewYork-Presbyterian team totally and unconditionally with trust that they were going to develop the right plan and do the right procedure the right way. That was really hard for me to do because that’s not my personality.

“Whatever they told me to do I did. For example, they told me I should drink a gallon of water and walk five miles a day while having daily chemotherapy, which I did,” says Andree. “All I wanted to do was crawl into bed, but instead, I decided I had to listen to them. It made a world of difference to put my complete trust in them. I’m really glad that I was able to do that because they tell me I’m 99% cured. I think it was due to my belief in them.”

One day, while waiting in an exam room for her doctor, Andree was asked by a young filmmaker for ABC’s NY Med, a documentary about NewYork-Presbyterian, if she would be willing to participate in a documentary about people who are going through the process of cancer treatment. At first not at all interested, Andree then asked, “Will it help other people if I decide to say yes?” The filmmaker said, ‘Definitely.’ So they followed me and the program appeared on ABC. It was cathartic to talk about the process as it was happening and to be able to say how I was feeling at that immediate moment because then I was able to leave those feelings behind and move on.”

Andree underwent a mastectomy, chemotherapy, and drug therapy. “The scariest part is when you’re given the diagnosis and told ‘This is what you’re up against,’ not when you’re going through it. The anticipation is the worst.”

While in treatment, she served as a mentor to others who had just been diagnosed. “I was extremely supported by Weill Cornell, my doctors, and my friends,” recalls Andree. “Because of this, I felt empowered and in a position to support other patients. I would talk with them about my experience and theirs. Some of the patients along the way had difficulty taking the cancer diagnosis seriously, which I completely understand. They were blocking the fact that they had cancer and that it was very serious. They paid for that. They’re also the first to say that to me.”

Nearly five years later, Andree continues to be a positive resource for cancer patients. “I live in a world where the word cancer is still frightening,” says Andree. “My goal is to help other women with cancer feel calmer, to enable them to put their trust in the people who are going to take care of them, and to be able to say this is only one chapter in my life. I realize that the more we communicate this, the more helpful it will be in the long run.”