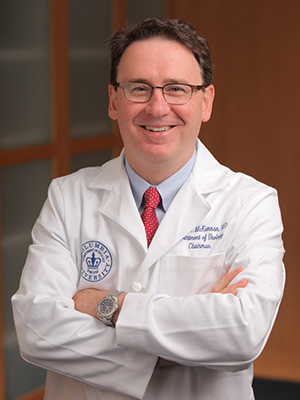 Patients with Bacillus Calmette-Guerin (BCG)-unresponsive bladder cancer remain a challenging patient population to treat. Radical cystectomy continues as the oncologic gold standard treatment in patients at high risk of recurrence after BCG failure in non-muscle-invasive bladder cancer. Due to the significant morbidity associated with this surgery, some patients are either ineligible or prefer to seek a bladder-sparing approach. Cancer specialists in the Department of Urology at NewYork-Presbyterian/Columbia University Irving Medical Center led by James M. McKiernan, MD, Urologist-in-Chief,  are exploring options for this patient population that extends their survival while minimizing the adverse effects of radical treatment.

Patients with recurrent or relapsing non-muscle invasive bladder cancer (NMIBC) that is unresponsive to bacillus Calmette-Guérin therapy are left with two treatment options that are less than ideal – radical cystectomy or salvage intravesical therapies. While radical cystectomy is associated with a high rate of disease-free survival, mortality rates can be as high as 5.6 percent in high volume programs and complication rates as high as 60 percent. Despite the more than four decades of research on salvage intravesical treatments, little progress has been made in terms of lasting efficacy.

With such limited choices for patients available, Columbia physicians decided to explore a novel combination of intravesical drug therapy as a viable alternative for patients who are not suitable candidates for or who are unwilling to undergo radical cystectomy. Their investigations began in 2013 with a preclinical study in a genetically engineered mouse model of single and combination regimens of intravesical cisplatin, gemcitabine, and docetaxel. The mice receiving any two-drug combination had a statistically significant delay in overt tumor formation, as well as reduced development of metastases compared to the single agent treatments.

Based on these results, urologists, pathologists, and medical oncologists at Columbia designed and conducted the first phase I trial to explore the safety and toxicity of a novel combinatorial intravesical chemotherapeutic strategy consisting of cabazitaxel, gemcitabine, and cisplatin for patients with high grade, BCG-unresponsive or relapsing NMIBC. The 18 patients in the trial represented a particularly high-risk group and had already undergone multiple treatments with intravesical therapies or salvage chemotherapy, including many who had been through previous clinical trials.

The study demonstrated that the cabazitaxel, gemcitabine, and cisplatin combination was well tolerated and yielded a remarkable initial complete response rate of 89 percent and 1-year recurrence free survival of 83 percent. The promising results have paved the way for a larger phase II trial now ongoing at NewYork-Presbyterian/Columbia that is showing similar promise.