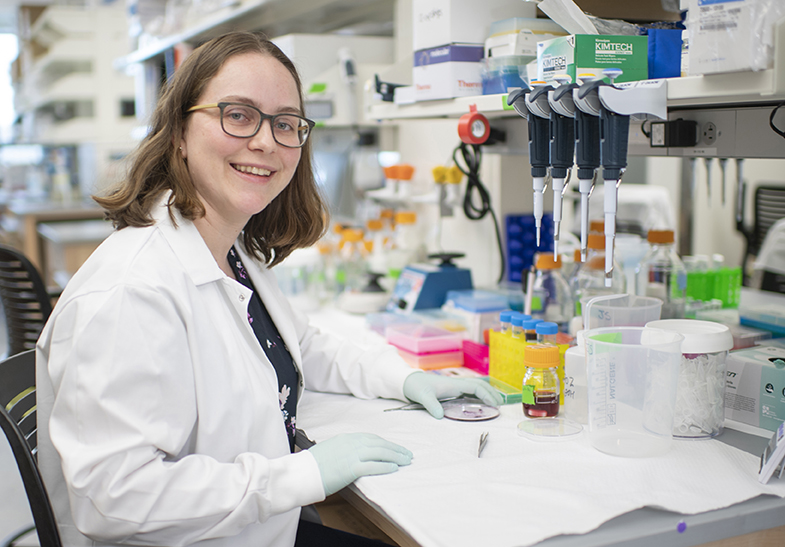 Since the 1960s, the zebrafish has continued to emerge as an important model for scientific research. This small freshwater fish has a genetic structure similar to humans and, in fact, shares 70 percent of our genes. As a vertebrate, the zebrafish has the same major organs and tissues as humans, and their muscle, blood, kidney, and eyes also share many features with human systems. Interestingly, 84 percent of genes known to be associated with human disease have a zebrafish counterpart. In particular, the zebrafish appeals to researchers because it can be bred rapidly in large numbers, is amenable to genetics, and has a clear embryo.

“There had been a longstanding impression in the orthopedic community that fish and their regenerative capacities would not be appropriate for arthritis research because their joints are not the same as human joints,” says Joanna Smeeton, PhD, H.K. Corning Assistant Professor of Rehabilitation and Regenerative Medicine at Columbia University Vagelos College of Physicians and Surgeons. “What we actually found in fish, however, was an ancient evolutionary origin of the synovial joints. We created a fish mutant by mutating the same gene – lubricin – that is affected in humans with arthritis, and we were able to give the fish arthritis, confirming that fish can be used for arthritis research.” 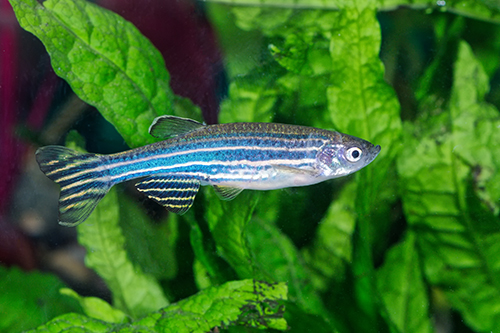 During her postdoctoral training at the University of Southern California, Dr. Smeeton was a member of a stem cell lab where she used the highly regenerative zebrafish to investigate the role of stem cells in rebuilding the cartilage and ligaments of the jaw joint. “In the zebrafish community, researchers have found that many different organs and tissues, including the heart and the spinal cord, can regenerate after injury in contrast to the poor regenerative capacity in humans and mice,” says Dr. Smeeton. “So, I wondered, can fish joints actually regenerate if we injure their cartilage and ligaments? In our preliminary work, we showed that regeneration does occur. Following a single transection cut to injure the ligament that supports the movement of the jaw joints in the zebrafish, the ligament would regrow, reestablishing the functional connection between the two bones without any stabilizing surgeries or other interventions by us. Within a few weeks, the joint is completely healed.”

“As in mammals, surgical injury to the ligament supporting the zebrafish jaw joint results in loss of articular cartilage,” continues Dr. Smeeton. “However, a remarkable difference is that while the cartilage and ligaments of mammalian joints have a very poor capacity for intrinsic repair, the zebrafish are subsequently able to regenerate both the ligament and joint cartilage. Understanding how the zebrafish accomplishes this could pave the way for developing novel disease-modifying treatments for arthritis.”

"My number one mission is to identify the stem cells that are driving this regeneration and hopefully find a growth factor that we can apply to a similar set of stem cells that reside within human joints that just haven't been properly pushed to regrow." — Dr. Joanna Smeeton

Dr. Smeeton and her colleagues went on to develop novel genetic and joint injury models in the zebrafish to uncover endogenous stem cell populations within adult joints. When Dr. Smeeton joined Columbia in January 2020, she established her laboratory within the Columbia Stem Cell Initiative to continue her groundbreaking studies in joint regeneration. The Smeeton Lab is using genetic, cellular, and molecular approaches in zebrafish to understand how joint cells are activated following injury and to uncover the regulatory framework of cell fate decisions during the differentiation of progenitor cells into articular cartilage and ligaments.

“The lack of robust endogenous repair may be at the root of many degenerative diseases of joints, in particular osteoarthritis,” notes Dr. Smeeton. “Our long-term goal is to translate these findings to activate stem cells for joint repair and develop regenerative treatments to restore function in patients suffering from osteoarthritis or traumatic joint injury.”

Dr. Smeeton’s laboratory endeavors to determine how to use the zebrafish for arthritis research. “What tips and tricks can we take from what the zebrafish is doing naturally and translate that into better repair for our patients? This may take the form of identifying a stem cell population within human joints that isn’t being activated properly and possibly modifying that population, improving cell engraftment techniques, or identifying a role for inflammatory modulators,” suggests Dr. Smeeton.

Dr. Smeeton and her colleagues have currently undertaken comparative analyses, comparing extensive epigenetic datasets they have generated from single cell sequencing of joints after injury in zebrafish and comparing them to uninjured states to help illuminate how these fish are actually regenerating their joints so well. “My number one mission is to identify the stem cells that are driving this regeneration and hopefully find a growth factor that we can apply to a similar set of stem cells that reside within human joints that just haven’t been properly pushed to regrow. In the long term, insights gained from studying endogenous stem cells in the zebrafish jaw joint could be harnessed to awaken analogous cell populations in mammalian joints to improve repair.”

A second part of the puzzle of interest to Dr. Smeeton is the issue of scarring. “This is fascinating to me,” she adds. “We can regenerate or we can repair our tendons and ligaments, but oftentimes they make a scar. This is biomechanically not as good for joint function afterwards. But the zebrafish is able to regenerate without scar. So again, what are the fundamental differences in the factors in scar healing versus scarless healing in zebrafish?”

“There are so many questions driving my research because once a person starts going down the path of arthritis, we don’t have any way to turn it back other than giving them a new joint,” says Dr. Smeeton. “Anything we can uncover to impact that disease progression would be substantially helpful. First we have to do our due diligence in the fish.”