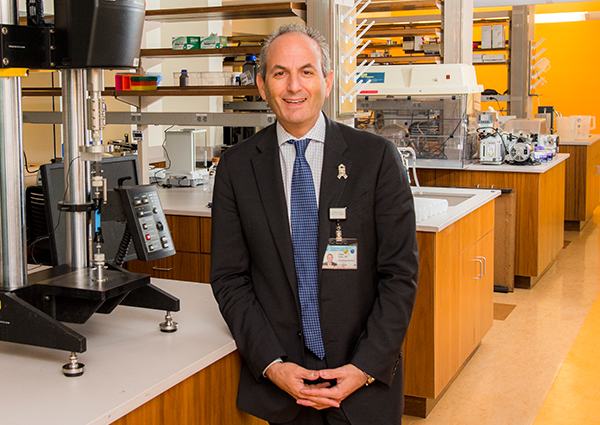 One of the most common conditions of the upper extremity, glenohumeral instability has been a major focus of the orthopedic surgeons at NewYork-Presbyterian/Columbia University Irving Medical Center. Under the direction of William N. Levine, MD, Orthopedic Surgeon-in-Chief, Columbia Orthopedics has garnered a global reputation for clinical and research expertise in shoulder instability, helping to shape the transformation in surgical treatment from open repair and reconstruction to arthroscopic management over the past two decades.

The following article presents recent research by Columbia faculty that continues to innovate approaches to care for patients presenting with acute or chronic instability.

Epidemiology of Shoulder Instability in the National Football League

Shoulder instability is a common and potentially debilitating injury among collision-sport athletes that can lead to long-term damage of the glenohumeral joint. However, few studies have investigated the occurrence of shoulder instability among elite athletes in the National Football League (NFL). Columbia orthopedic surgeons retrospectively reviewed the NFL’s injury database for shoulder instability injuries resulting in missed time, classifying injuries by type (subluxation vs. dislocation), direction, timing (pre-season vs. regular season vs. post-season), setting (practice vs. game vs. conditioning), and injury mechanism. Median missed time was determined for the different types and directions of instability, and incidence rates were calculated based on timing and player position. Finally, the relationship between player position and instability direction was assessed.

From 2012-2017, 355 players sustained 403 missed-time shoulder instability injuries. Most injuries occurred during games (65 percent) via a contact mechanism (85 percent). The overall incidence rate of game-related instability was 3.6 injuries per 100,000 player-plays and was highest during the pre-season. Defensive secondary accounted for the most injuries overall, but quarterbacks had the highest incidence rate in games (5.5 injuries per 100,000 player-plays). Approximately 70 percent of injuries were subluxations (n=192) while 30 percent were dislocations (n=83); 75 percent of dislocations were anterior while subluxations were more evenly distributed between anterior and posterior (45 percent vs. 52 percent, respectively). The majority of instability events among quarterbacks and offensive linemen were posterior (73 percent and 53 percent, respectively) while anterior instability was most common for all other positions. Players missed substantially more time following dislocation compared to subluxation (median of 47 days vs. 13 days, respectively).

The high incidence of posterior instability among offensive linemen and quarterbacks was attributed to repetitive microtrauma to the posterior capsulolabral complex sustained during position-specific motions such as blocking and throwing. Overall, this study highlights the diverse nature of shoulder instability injuries and the need for heightened awareness among medical personnel treating collision-sport athletes. 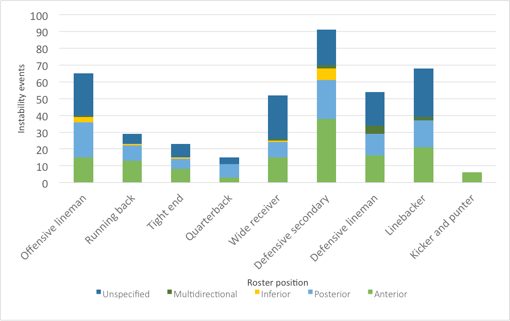 The shoulder is a commonly injured area in hockey due to direct or indirect high-speed collisions with other players, collisions with the surrounding boards or equipment, and the aggressive nature of the game. Shoulder dislocations present a unique challenge to the competitive athlete as prompt management and treatment can be critical to career longevity and athletic performance. With a paucity of data examining its impact on hockey players and even less data available on outcomes in professional hockey players, Columbia orthopedic surgeons examined the incidence of shoulder dislocation events in the National Hockey League (NHL) and the effects on return-to-play and player performance. Their study is one of the first investigations on post-injury performance in professional hockey.

The retrospective cohort study evaluated NHL players who suffered at least one in-season shoulder instability event – defined as a dislocation of the glenohumeral joint requiring reduction – between the 2003-2004 and 2017-2018 seasons. The researchers collected demographic characteristics, incidence of injury, recurrences, return-to-play, and statistical performance data and compared post-injury performance with experience-matched, era-matched, position-matched, and age-matched controls. They used a mixed generalized linear regression model to compare post-injury performance as a function of operative and nonoperative treatment.

In the study, 57 players experienced 67 shoulder instability events with 98.5 percent of players returning to play after an average of 26.3 ± 20.8 regular season games missed. Surgery was performed in 47.8 percent of players with no recurrent injuries postoperatively. Nonoperatively managed players experienced a decrease in points per game compared with surgically treated patients. Recurrence occurred in 14.3 percent of conservatively managed players, with 33.3 percent experiencing a season-ending injury. The researchers also found that players with recurrent injuries missed significantly more career games compared with those treated initially with surgery.

The Columbia investigators concluded that professional hockey players experience high rates of return to play with acceptable performance outcomes after shoulder instability events. However, recurrent injuries led to significantly more career games missed when players were treated nonoperatively at the time of injury. Given the physical and financial impact of this type of injury on professional players, the authors believe there is a need to develop a treatment protocol for shoulder instability in hockey.

Average Number of Games Missed Based on Treatment Type 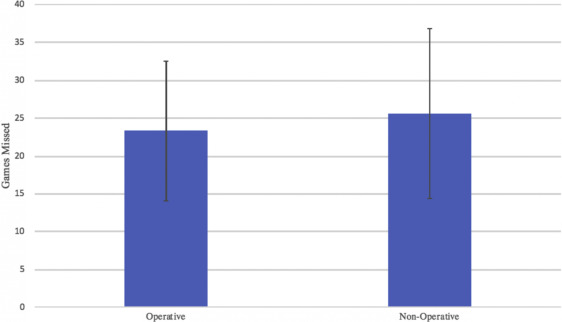 Coracoacromial Arch Anatomy and Anterior Shoulder Instability: Is There a Connection?

To quantitatively measure and analyze the anatomy of the shoulder coracoacromial arch, nine radiographic measurements of the coracoacromial arch anatomy were taken in patients with unidirectional anterior shoulder instability or glenohumeral osteoarthritis:

This study identifies the shoulder arch angle and the anterior coracoid tilt as risk factors for anterior instability, as patients with a less contained coracoacromial arch were associated with anterior instability requiring arthroscopic stabilization. Greater posterior acromial coverage and posterior acromial tilt were also associated with reduced anterior shoulder instability contributing to the concept that the entire arch, both anteriorly and posteriorly, is important for stability. The findings suggest that this simple radiographic measurement method can be employed in routine orthopedic care to analyze risk and improve clinical decision making for shoulder instability.

A Review Course on Shoulder Instability