NewYork-Presbyterian provides medical, interventional, and surgical therapies for people with arrhythmias. Your treatment may include one or more of the approaches below.

Many people are able to have their heart rhythm controlled using medication. Examples of antiarrhythmic drugs include:

If we cannot cure your arrhythmia with medication or ablation, we may try using a surgically implanted device that corrects abnormalities in your heart's rhythm. We also have specialized expertise in the removal of leads in individuals with damaged or infected devices. You may benefit from one of the technologies below. 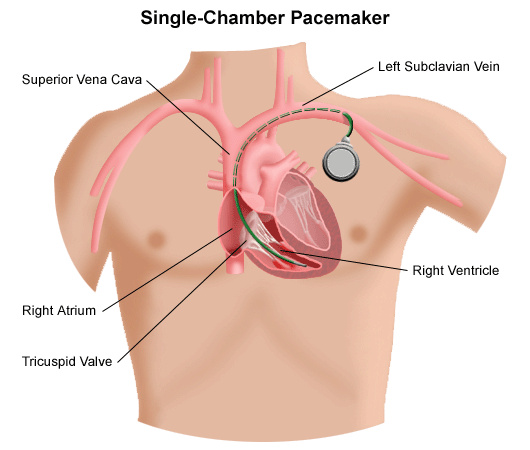 If your heartbeat is too slow, you may benefit from a permanent pacemaker (a small device that we implant under the skin in your chest) to ensure that your heart beats at a normal rate. We use the latest advances in pacemaker technology, including single-chamber or dual-chamber pacemakers, alone or combined with other devices to treat arrhythmias.

We use these devices in people with or at risk for arrhythmias to protect against life-threatening heartbeat irregularities and the sudden cardiac death that can result. Similar to a pacemaker, the ICD is a small device implanted under the skin, usually in your chest. It continuously monitors your heartbeat and immediately senses abnormally rapid and potentially dangerous heart rhythms. The ICD then delivers electrical impulses to stop the arrhythmia and allow your normal heartbeat to resume.

We offer biventricular pacemakers and defibrillators to resynchronize the beating of the heart in people with congestive heart failure whose heart contractions have fallen out of sync ("cardiac resynchronization therapy" or CRT). These special implantable devices have a pacemaker wire directly pacing the beating of the left ventricle, plus a standard pacemaker wire in the right ventricle. We often combine biventricular pacemakers with ICDs for people at risk of life-threatening arrhythmias.

Our heart surgeons offer surgical procedures for people with atrial fibrillation that cannot be adequately controlled with medications, ablation, or implanted devices.

We use this open-heart approach to cure atrial fibrillation by interrupting the electrical impulses that cause an abnormal rhythm. The surgeon makes incisions in both atria. When they heal, scar tissue forms, creating a "roadblock" that prevents the abnormal electrical impulses from passing through your heart.

Our surgeons have developed a minimally invasive Maze procedure that uses special energy sources, such as radiofrequency energy or freezing temperatures, to create scars in the walls of the atria (surgical atrial fibrillation ablation). Such modified Maze procedures are effective in everyone with atrial fibrillation, and are especially appropriate for people who don't benefit from catheter ablation.

Our surgeons developed a robotically assisted, totally endoscopic beating heart version of surgical atrial fibrillation ablation. They perform this minimally invasive procedure through very small incisions in your chest without stopping your heart or using the heart-lung machine.