At NewYork-Presbyterian/Weill Cornell Medical Center, active research is ongoing toward understanding the pathways of genomic imprinting, which is a cellular process critical for multiple aspects of pediatric health and disease. “Genomic imprinting, an epigenetic mode of gene regulation, has a profound effect on fetal growth and contributes to a wide range of rare genetic disorders and common diseases,” explains Matthew Smith-Raska, MD, PhD, a neonatologist and Friedman Family Foundation Clinical Scholar in Newborn Medicine at NewYork-Presbyterian Komansky Children’s Hospital. “My goal is to uncover the molecular pathways of genomic imprinting to better understand this process, and potentially develop targeted therapies that will alter this process to improve health and quality of life.” 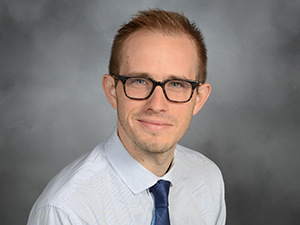 “Epigenetics describes inheritance that is independent of a gene, or a DNA sequence, and can be driven by any non-DNA substance that is passed in a sperm or egg to offspring,” explains Dr. Smith-Raska. “Genomic imprinting is an epigenetic process in which an individual silences a gene-based on whether it was inherited from the mother or father. For example, a maternally imprinted gene is silenced from the copy inherited from the mother and expressed from the copy inherited from the father. Patients with genomic imprinting disorders possess a normal copy of a gene that has been epigenetically silenced, or ‘imprinted’ and a mutated copy of the expressed gene.”

“Imprinted genes play an essential role in the development and function of the placenta, and are contributors to intrauterine growth restriction (IUGR), a condition that affects 8% of all pregnancies and is the leading cause of complications in the perinatal period,” he continues. “Defects in imprinted genes are also the cause of neurodevelopment disorders such as Angelman Syndrome, which is associated with symptoms such as a small head, a specific facial appearance, severe intellectual and developmental disability, speaking problems, balance and movement problems and seizures; Beckwith-Wiedemann syndrome, in which babies are born unusually large and are vulnerable to childhood cancers of the kidney and liver; and Prader-Willi syndrome, in which newborns have symptoms such as weak muscles, poor feeding, and slow development, and in older children causes constant hunger that often leads to obesity and type 2 diabetes. Beyond the fetal stage, imprinted genes play important roles in newborn growth, neurodevelopment, and social behaviors.”

As a neonatologist at NewYork-Presbyterian Komansky Children’s Hospital, Dr. Smith-Raska sees the impact of abnormal genomic imprinting in his young patients firsthand and has dedicated his research career to understanding the cellular process of genomic imprinting. In the lab, Dr. Smith-Raska is conducting research on the role of imprinting in fetal growth and neurodevelopment, with specific focus on two genes, Nlrp7 and Khdc3l, that he calls ‘master genetic regulators’ of the imprinting process in germ cells (oocytes and sperm). “Indeed, it has been shown that specifically-engineered molecules can lead to un-silencing of imprinting in a mouse model of an imprinting disorder, which leads to improvement of the symptoms caused by the disorder,” he says.

Using novel approaches in mouse models and human cell lines, Dr. Smith-Raska is researching the common molecular mechanism of Nlrp7 and Khdc3l in driving genomic imprinting. As part of this exploration, he is examining the role of Khdc3 (the mouse version of Khdc3l) in the germ cells of a mouse in which Khdc3 has been removed. In the mouse models, Dr. Smith-Raska is looking for defects that can provide clues for how this gene regulates imprinting. As an added twist, the Khdc3 protein is localized near the cell membrane, far away from the DNA in the nucleus where imprinting occurs.

“Our goal is to better understand the mysterious pathway regulated by Nlrp7 and Khdc3l, which has the potential to reveal a previously undescribed aspect of human biology,” explains Dr. Smith-Raska.

Imprinting is also an excellent model system for studying a phenomenon known as epigenetic inheritance. “Epigenetic inheritance describes how an individual’s life experiences (food availability, stress, exposure to toxins) can affect traits of descendants,” says Dr. Smith-Raska. “Multiple studies in many different organisms have revealed that ancestral experiences can affect descendants’ traits and risk of disease, but the mechanisms by which this occurs remains a complete mystery. One example is a study of a genetically homogenous population in a small village in Sweden. After looking at births and deaths over a period of more than 100 years, the researchers found that food availability to the grandparents during adolescence directly impacted the risk of cardiovascular disease in their grandchildren. In this case, we know the individuals’ genes did not change, but some sort of information that was not in the DNA was inherited by the grandchildren. Genomic imprinting is an excellent model for studying how information is inherited in a DNA-independent manner. In this case, the information is whether the gene was inherited from the mother or father.”

With the field still in its infancy, questions regarding how and why genomic imprinting evolved remain unanswered. “The working theory is that imprinted genes resulted from an evolutionary tug-of-war between the interests of maternal versus paternal genomes,” says Dr. Smith-Raska. “It likely evolved along with the evolution of the mammalian placenta, where imprinted genes play an important role in allocation of resources from the mother to the fetus.”

“In addition to fetal development, insights into the pathways of genomic imprinting will have an enormous impact on the fields of gene therapy, immunology, cancer biology, biotechnology, and neuroscience. I am excited to see where this field of inquiry will take us.”