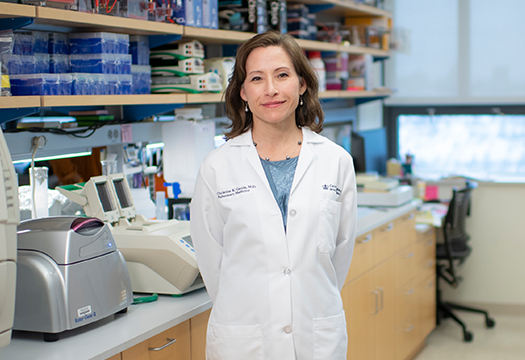 Christine Kim Garcia, MD, PhD, Chief of the Division of Pulmonary, Allergy, and Critical Care Medicine, NewYork-Presbyterian/Columbia University Irving Medical Center, is a preeminent clinician and researcher. Dr. Garcia’s research utilizes next generation sequencing and bioinformatic analyses to identify rare mutations in genes linked to inherited forms of lung disease. Her discoveries have implicated the surfactant and telomere pathways to the development of adult-onset pulmonary fibrosis. She is currently leveraging these discoveries to improve patient care.

“Throughout my career, I have found myself at the intersection of human genetics and pulmonary medicine,” says Dr. Garcia, a pulmonary critical care trained physician who uses her PhD in molecular genetics and training in human genetics to study lung disease. “The overarching focus of my laboratory is to identify the genetic drivers of lung disease in adults.”

Since 2005, Dr. Garcia has banked biologic specimens collected from families and patients with rare lung diseases – a collection that now has more than 4,000 genomic DNAs and thousands of cell lines, lymphocytes, plasma, and serum samples. Her work continues to leverage this biobank to interrogate the genetic architecture of pulmonary disease.

“The disease we have pursued most diligently is familial pulmonary fibrosis, which is defined as the occurrence of fibrotic lung disease in at least two related individuals within the same family,” notes Dr. Garcia. “While many different disease subtypes are diagnosed in patients from these families, the most common diagnosis is idiopathic pulmonary fibrosis [IPF]. Although IPF is considered a rare disease when considering individuals across the life spectrum, it is more common, affecting approximately 1 in 200 individuals, in adults older than 65 years of age. The genetics is complex, as the disease sometimes ‘skips’ certain people or entire generations in a family. There are now two FDA-approved treatments for pulmonary fibrosis. But these drugs cannot completely stop progression of the scarring process. Today, pulmonary fibrosis is the number one indication for a lung transplant.”

With an enrollment of over 400 families, Dr. Garcia and her colleagues partner with patients and their family members to study lung disease. The work is often painstakingly slow. “We have been studying some families for over 15 years. We find that the genes linked to the disease explain only about one-fourth of families. The genetic underpinnings of the other three-fourth of families are unexplained and are still ‘unsolved’ even after using next generation sequencing and advanced bioinformatics,” says Dr. Garcia. “I describe my work as being a genetic detective. By collecting blood samples – and sometimes lung samples – we are piecing together a jigsaw puzzle to dive even deeper in our understanding of the genetic variants inherited at birth, and the genomic changes occurring over time, that lead to lung disease. My hope is that this information will lead to more effective treatments to improve patient care in the future.”

How Telomere Pathways Play a Role

Through collaborations with David Goldstein, PhD, Director, Institute for Genomic Medicine at Columbia, Dr. Garcia’s research team has access to state-of-the art sequencing platforms and data from ~100,000 control subjects, enabling them to test hypotheses generated from sequencing studies. She can also call on the Institute’s high throughput sequencing capabilities for analysis of non-coding regions that may lead to further understanding of those with unsolved familial pulmonary fibrosis and other lung diseases.

Dr. Garcia’s work in discovering the genetic basis of pulmonary fibrosis has been particularly fruitful. Her laboratory discovered mutations in the gene encoding surfactant protein A, which is one of the most common proteins secreted into the lung alveolar fluid. Using linkage and sequencing approaches, her laboratory was one of the first to identify rare mutations in the genes encoding telomerase, which is the enzyme that adds repetitive sequences of DNA to the ends of chromosomes, thus, lengthening the telomere and protecting the chromosome from damage. 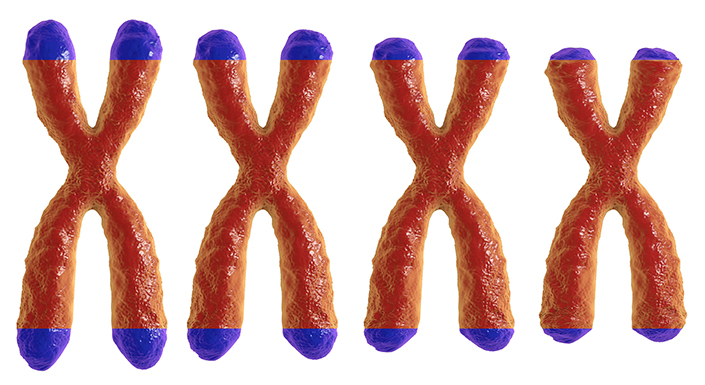 “These rare mutation discoveries from a small number of families have led to the eye-opening realization that excessive telomere shortening can cause pulmonary fibrosis,” says Dr. Garcia.

“These rare mutation discoveries from a small number of families have led to the eye-opening realization that excessive telomere shortening can cause pulmonary fibrosis.” — Dr. Christine Kim Garcia

Applying Genetic Findings to the Clinic

By incorporating her research into clinical practice, Dr. Garcia and her colleagues have characterized the spectrum of interstitial lung disease phenotypes associated with rare mutations in the pulmonary fibrosis genes. For individuals who have an inherited pathogenic mutation in the TERT gene, which is the gene most often involved, prevalence of pulmonary fibrosis is age-dependent, affecting approximately 50 percent of individuals over 50 years of age. The onset of lung disease and the presence of certain extra-pulmonary manifestations are also linked to particular genetic mutations. The presence of a genetic mutation in a telomere-gene is more predictive of patient outcomes than a specific interstitial lung disease (ILD) diagnosis, suggesting that a genetic workup may be particularly informative for certain patients.

Is age-adjusted blood leukocyte telomere length capable of predicting progression of pulmonary function decline and survival in patients with different ILDs? Dr. Garcia’s laboratory also has shown that blood cell telomere length is a biomarker that predicts a number of different clinical outcomes for patients with IPF. Her group was the first to show that blood leukocyte telomere lengths predict survival of IPF patients. Short age-adjusted telomere lengths are independently associated with worse survival, even after accounting for traditional risk factors. They also predict rate of clinical progression for a number of different fibrotic ILDs, response to immunosuppressive medications, and patient outcomes after lung transplantation.

Determining how this biomarker and the genetic variants that influence telomere length can be used to personalize the clinical care of ILD patients is also under exploration by the Columbia team. “We have shown that telomere length predicts harm in IPF patients exposed to immunosuppressive medications,” says Dr. Garcia. “Although treatment of IPF patients no longer includes immunosuppression, it remains part of the treatment armamentarium for patients with other subtypes of ILD, such as hypersensitivity pneumonitis and autoimmune subtypes of pulmonary fibrosis. If short telomere ILD patients have a genetic vulnerability to the adverse effects of immunosuppression, then some patients may be harmed by these therapies. We are leveraging various cohorts of patients, including those collected at Columbia and other centers, to explore how genetics and genomics can individualize and tailor particular treatments for pulmonary fibrosis patients.”

Dr. Garcia is studying how to best transfer the knowledge gained from genetic studies to the clinic. “Can we sequence the genes of the patients that are referred to Columbia’s ILD clinic and determine how this information can help them? This is a critical question we are seeking to answer,” says Dr. Garcia.