Augmenting Repair Where the Tendon Meets the Bone 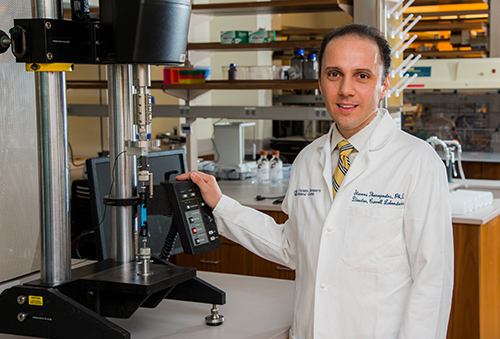 In Columbia’s Carroll Laboratories for Orthopedic Surgery under the leadership of Stavros Thomopoulos, PhD, Vice Chair of Basic Research in the Department of Orthopedic Surgery, scientists continue to investigate one of the greatest challenges in orthopedic medicine: tendon-to-bone healing. With major funding from NIH grants, Dr. Thomopoulos and his colleagues are pursuing mechanical and biologic solutions to solve the nagging difficulties of re-attaching tendon to bone.

“Over the last few decades, new suturing methods and devices have been developed to secure tendon back to bone, yet repairs still fail,” says Dr. Thomopoulos. “Healing of tendon to bone fails to recreate the structure and composition of the healthy enthesis. Ultimate success lies in novel repair methods and biological solutions.

The functionally graded transition between tendon and bone is not regenerated during the healing process.
A) Healthy attachment and B) Healing attachment under bright field in the top row and under polarized light in the bottom row (Courtesy of Dr. Stavros Thomopoulos)

The difficulty lies in trying to achieve a resilient connection between two very different materials. While surgical repair can now create a secure connection of tendon back to bone, the capability of the enthesis to withstand high loads and be continuously maintained and repaired by local cells in the tissue has lagged behind. The Columbia research team has been seeking a resolution to a successful tissue-to-bone interface through a number of studies, which have recently been published in the literature. Following are some highlights of that research.

An Architectural Perspective on the Enthesis

How does the healthy tendon enthesis manage to achieve toughness across a wide range of loadings? Dr. Thomopoulos and his colleagues submit that the answer to this question may help drive the development of engineering and medical approaches to facilitate a durable tendon-bone attachment.

The Columbia researchers performed an extensive analysis of the issue, integrating data from mouse models, simulations, and a novel microcomputer tomography technique enabling the simultaneous observation of mineralized and unmineralized fibrous networks. Their goal, which was to characterize architectural and compositional toughening mechanisms, was realized with the recognition that “physiologically, enthesis composition and microstructure in vivo adapted to loading in a way that revealed a trade-off between strength and toughness.” Their findings, published in the November 26, 2021 issue of Science Advances, included:

The authors conclude, “These features of the adaptable, architectured, fibrous enthesis have direct implications for tough attachment between dissimilar materials, facilitating improved design of surgical and tissue-engineered solutions for tendon-to-bone repair.”

Scrutinizing the Enthesis via Simulation

In a subsequent article, published in the December 2021 issue of the Journal of the Royal Society, Interface, the Columbia research team delved deeper into understanding enthesis toughness and functional capabilities. Their investigations focused on how the enthesis toughness arises across tendons with diverse loading orientations and how tendon enthesis manages its multiple functions within different joints – from accommodating the wide range of motion needed for the shoulder joint to the capability of storing energy for locomotion in the ankle joint.

The researchers hypothesized that “toughness, across a range of tendon entheses, could be explained by differences observed in interactions between fiber architecture and bone architecture.” The comprehensive studies involved their development of a position-dependent fiber recruitment model, accomplished through simultaneous imaging of the bone and tendon in entheses, which depicted the range of tendon entheses and bone attachment geometries.

“The simulations revealed toughening mechanisms across a range of joint orientations and a balance between strength and toughness that depended on the particular functional requirements of the joint,” noted the authors. “Simulation results showed that the entheses of tendons commonly characterized as energy-storing prioritize toughness over strength, while those of tendons commonly characterized as positional prioritize consistent stiffness across all loading directions. Results provide insight into techniques for surgical repair of tendon-to-bone attachments, and more broadly into mechanisms for the attachment of highly dissimilar materials.”

In a review published in the January 2022 issue of Matrix Biology, a team of Columbia orthopedic and biomedical engineering scientists led by Dr. Thomopoulos, explore this question in great depth, reporting on the role of hedgehog (Hh) signaling in:

The authors also present their perspective on opportunities for promising therapeutics that target the Hh signaling pathway. In fact, a number of Hh inhibitors have been approved to treat diseases such as cancer that involve unregulated growth. They suggest that with the role of the Hh signaling pathway in the formation of the enthesis as well as in the development of pathologies, its potential as a therapeutic target in the treatment of various tendon and enthesis disorders is considerable, warranting further molecular and cellular studies to translate this theory into tangible treatments.