Neil A. Shneider, MD, PhD, a neurologist in the Department of Neurology at NewYork-Presbyterian/Columbia University Irving Medical Center, is leading a global phase 1-3 clinical trial of an experimental drug – jacifusen – that may alter the progression of amyotrophic lateral sclerosis (ALS). This new trial is based on promising results from a study at Columbia published in the January 24, 2022 issue of Nature Medicine that demonstrated that jacifusen lowered levels of FUS, a toxic protein, in an animal model.

“We found that a single infusion of the drug at birth effectively silenced the FUS gene, reduced FUS protein levels in the brain and spinal cord, and delayed motor neuron degeneration in the mice – all with no apparent side effects,” says Dr. Shneider, who is Director of the Eleanor and Lou Gehrig ALS Center at Columbia and the Claire Tow Associate Professor of Motor Neuron Disorders in the Department of Neurology at Columbia University Vagelos College of Physicians and Surgeons. 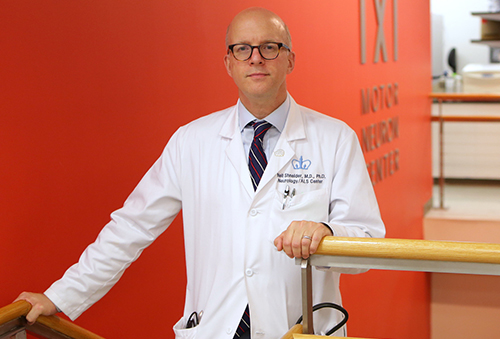 Dr. Shneider had used the drug previously in a last-resort treatment for a young woman, Jaci Hermstad, who had juvenile ALS, a rare and aggressive form of the disease that can affect individuals in their teens or 20s. He first met Jaci in 2018. Her identical twin sister had died of ALS caused by a genetic mutation in the FUS gene. Soon after, Jaci began to show signs and symptoms as well.

Dr. Shneider immediately reached out to a leading developer of antisense therapeutics looking for a drug that shuts down production of the FUS protein to slow the progression of Jaci’s disease. This led to the identification of ION363, a compound that had effectively lowered FUS levels in a mouse model of FUS-related ALS. However, the drug had never been tested in humans. With remarkable speed, Dr. Shneider received special permission from the Food and Drug Administration to give the drug to Jaci through the FDA’s compassionate use program.

Jaci received the first of several doses of the drug in 2019. “We saw a significant slowdown in her functional decline, but sadly, her disease was already advanced by the time she began the treatment and she died about a year later,” says Dr. Shneider. “Examination of her brain tissue showed that treatment with the drug markedly reduced FUS protein aggregates in her brain cells. We found that it had a profound effect, virtually eliminating the toxic proteins in the central nervous system and reducing the burden of FUS pathology dramatically. At a molecular and cellular level, jacifusen – informally named for Jaci, the first person to receive the drug – was very effective at doing what we hoped it would do.”

“Our study in mice, along with our findings in Jaci’s case, suggest that the drug has the potential to delay or prevent ALS caused by mutant FUS before symptoms appear or to slow clinical progression after disease onset,” adds Dr. Shneider.

“At a molecular and cellular level, jacifusen – informally named for Jaci, the first person to receive the drug – was very effective at doing what we hoped it would do.” — Dr. Neil Shneider

Encouraging signs from 10 other patients who received jacifusen under the compassionate use program led to a pivotal phase 1-3 clinical trial of jacifusen at Columbia and multiple sites in the United States, Europe, and Asia. The trial, led by Dr. Shneider, will enroll at least 64 patients. “This trial will determine if jacifusen is safe, and if it can effectively slow disease progression in symptomatic FUS-ALS patients,” he says. “If approved, jacifusen would be the first treatment for this highly aggressive form of early-onset ALS.”

Future studies will determine whether jacifusen works if given to people with ALS-associated FUS mutations before they become symptomatic, as it did in the mouse studies. 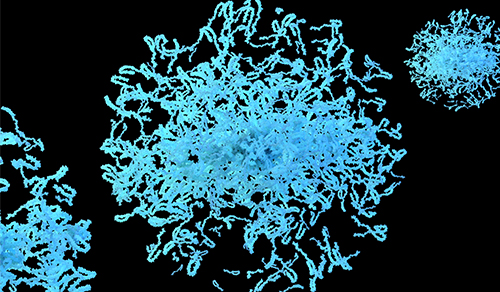 Weill Cornell Medicine neuroscience team to study how abnormal protein aggregates may spread from the gut to the brain to drive the early stages of Parkinson’s disease.
Learn More