Up to one third of patients with epilepsy have seizures refractory to multiple medications and are considered drug resistant. Drug-resistant epilepsy progressively impacts cognition, productivity, quality of life, and mortality. For these patients, additional medications are unlikely to control their seizures. Surgical resection of the epileptogenic zone can be highly effective for well-selected patients and yet this approach is not frequently pursued partly due to patients’ concerns about its invasiveness, morbidity, and neurocognitive side effects. Magnetic resonance-guided laser interstitial thermal therapy (MRgLITT), which offers less invasive access for stereotactic ablation rather than resection, is the focus of a comprehensive review in Neurosurgery led by Brett E. Youngerman, MD, MS, along with Ashkay Save, MD, and Guy M. McKhann, MD, in the Department of Neurological Surgery at NewYork-Presbyterian/Columbia University Irving Medical Center.

Laser ablation for mesial temporal lobe epilepsy. A) Real-time MRI thermometry allows for temperature monitoring during the ablation to prevent damage to nearby structures. B) The cumulative ablation estimate predicts the area of the completed ablation. 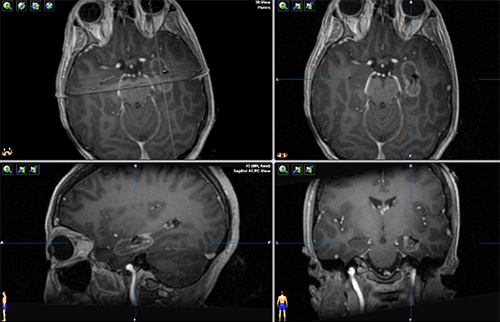 MRg-LITT is the selective ablation of a lesion or a structure using heat from a laser. Once an ablation target is identified, one or more laser fiber trajectories are planned based on the target, adjacent and overlying anatomy, and estimates of thermal spread. The laser fiber is placed with stereotactic image guidance though a less than 1cm incision. During the ablation, temperature is monitored in real-time in the MRI scanner to prevent damage to nearby structures. Patients frequently go home the next day after the procedure.

“LITT is emerging as a minimally invasive alternative to open surgical resection for several types of drug-resistant epilepsy,” says Dr. Youngerman, who notes that the approach is an increasingly popular surgical option for patients with focal onset epilepsy not controlled with medications. “It provides access to create well-demarcated lesions of the epileptogenic zone virtually anywhere in the brain with minimal disruption to the overlying cortex and white matter.” 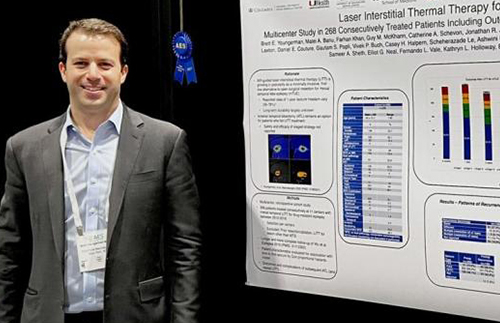 Dr. Brett Youngerman received the 2021 Young Investigator Award for his presentation on Laser Interstitial Thermal Therapy for Mesial Temporal Lobe Epilepsy at the 2021 Annual Meeting of the American Epilepsy Society.

Dr. Youngerman also presented the results of a multicenter study of laser ablation at the recent annual meeting of the American Epilepsy Society. In their study, the Columbia team reviewed data on 268 patients from 11 institutions where MRg-LITT is performed, making it the largest study to date to examine the viability of this approach in the treatment of temporal lobe epilepsy. “Pooling data from these centers, we found that after a median of almost four years – the longest follow-up reported thus far – we are seeing about a 50 percent freedom-from-seizure rate,” says Dr. Youngerman. “This is not quite as impressive as open surgery where we can achieve freedom-from-seizure rates in the 60 to 80 percent range, but many patients would prefer this minimally invasive option rather than open surgery.”

For those who are considering temporal lobe therapy for epilepsy, Dr. Youngerman says, “If the patient wants the best chance at seizure freedom up front, we counsel them to consider open surgical resection. But if they are not willing to undergo that operation or want a minimally invasive option to try first, LITT offers a good chance of treating the seizures in well-selected patients. Additionally, LITT appears to have advantages in hospital length of stay and in surgical complications compared with the open procedure.” Having MRg-LITT also does not preclude a patient from going on to open surgery later should this approach fail to stop the seizures.

One question for which the researchers do not have an answer at present is whether this therapy provides a benefit for neuropsychological outcomes such as speech and memory. “There are data that suggest that by sparing parts of the temporal lobe and just targeting the key areas we believe are triggering the seizures, we can get better neuropsychological outcomes,” says Dr. Youngerman. “However, we still need to wait for better prospective collection of that data, which is ongoing.”

The researchers concluded, “Compared to other ablative techniques, MRgLITT offers immediate, discrete lesions with real-time monitoring of temperature beyond the fiber tip for damage estimates and off-target injury prevention. Applications of MRgLITT for epilepsy are growing rapidly and, although more evidence of safety and efficacy is needed, there are potential advantages for some patients.” 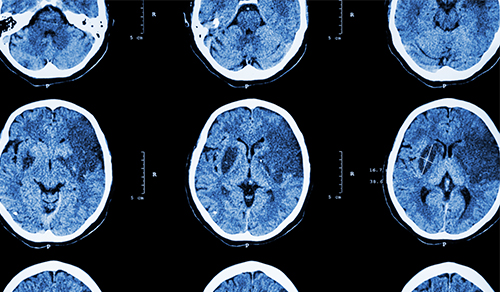