Bringing Optimism for Treatment of DIPG

In June 2018, the journal Lancet Oncology published the highly anticipated results of the first-ever dose escalation study using convection-enhanced delivery (CED) in patients with diffuse intrinsic pontine glioma (DIPG). Led by Mark M. Souweidane, MD, a pediatric neurosurgeon at the Weill Cornell Brain and Spine Center, the milestone phase 1 clinical trial investigated the safety of using CED to bypass the blood-brain barrier and administer a drug directly to a brain stem tumor site. The study validates CED as a safe and efficient method to deliver drugs directly into a tumor with minimal to no systemic exposure.

These extremely promising results bring forth a new potential for an effective treatment for one of the deadliest brain tumors in children, with a median survival of less than 12 months. By delivering the agent into the tumor through a surgically placed infusion cannula, the procedure drastically increases the concentration of the drug at the site of the tumor while avoiding the dangerous systemic toxicity that accompanies IV or oral chemotherapy.

The therapeutic agent 124I-8H9 consists of the 8H9 antibody, which is produced by mice and has been shown to attack many kinds of tumors, combined with the radioactive substance 124I. This clinical trial was the first time CED was used to administer 124I-8H9 to a human brain.

The average dose safely absorbed was more than 1,200 times that of the mean whole-body dose, providing an astronomical benefit over standard chemotherapy for DIPG and other types of malignant glioma. In fact, seven dose escalations were tested as the study progressed, and the procedure resulted in zero dose-limiting toxicity.

Over the course of five years, 28 patients who had previously received radiation therapy were successfully treated with this alternative drug delivery method during Dr. Souweidane’s clinical trial, which took place at Memorial Sloan Kettering Cancer Center. “Our median overall survival has thus far exceeded historical controls, but cannot be statistically validated,” says Dr. Souweidane. “There are two children who are seemingly cured, one at three years and one at six years post diagnosis.” 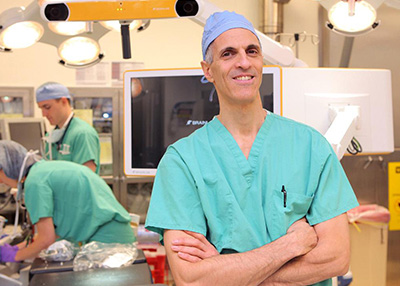 “I have never felt more optimistic. Now more than ever, I’m determined to keep going, to get to the next level, and to get my hands on a real cure for this killer,” says Dr. Souweidane, who has been working on DIPG research for more than 20 years. Based on the results of the study, Dr. Souweidane is nearing the launch of a formal, multi-institution expansion of the clinical trial that will explore new agents and combinations delivered via CED. This next step will allow more children to be treated nationwide, testing different doses and agents in a quest to find a cure.

“Long before the results of this trial were published, I started working on the next steps. Within the coming months we’ll be treating more children with different drugs — drugs that have shown promise against DIPG cell lines in the lab and that must now be tested in actual children,” says Dr. Souweidane. “We’ll be testing CED in multiple sites across the country, in an unprecedented collaboration among fellow scientists and clinicians. We are witnessing a groundswell of determination to change the course of this disease.”

“This trial is about hope,” adds Dr. Souweidane. “It’s about admitting that we have been failing these children for decades and taking a huge departure from the standard protocols in order to provide children with more effective options, less toxicity, and increased hope for the future.”