Weill Cornell cardiologists authored a comprehensive review focused on the unique properties of adenosine that make it a specific electrophysiological probe for identifying underlying supraventricular arrhythmogenic mechanisms and confirming ablative success. Published in the December 2018 issue of Circulation: Arrhythmia and Electrophysiology, their article notes that “adenosine is a potent but underutilized tool that is useful for clarifying the clinical diagnosis of seemingly obscure or poorly understood arrhythmias … and provides insights that are independent of and synergistic with those obtained with standard pacing maneuvers routinely used to uncover supraventricular mechanisms, such as entrainment, resetting, or para-Hisian pacing. The advantages of adenosine are that its effects are short-lived (on the order of several seconds), its effects are potent, and its signal transduction cascade mediates a multiplicity of electrophysiological effects that no other single agent replicates.”

Termination of atrial tachycardia with adenosine facilitates in classifying AT circuit dimension and origin. (Left) Mapping of mitral annulus during tachycardia showed the earliest site of activation localized to the lateral annulus. Initial ablation application at this site terminated tachycardia.
(Source: Circulation: Arrhythmia and Electrophysiology. 2018;11:e006953)

Adenosine has considerable value in providing the electrophysiologist with insights and actionable findings that are not fully replicated by any other agent or intervention.

The authors reported that adenosine is the only agent, to their knowledge, that can provide insight into atrial tachycardia circuit dimension and mechanism, as well as probability of tachycardia location. They concluded, “Familiarity with the multifaceted effects of adenosine, including its effects on dormant conduction, unmasking of arrhythmogenic pathways, or in identifying triggered activity as the mechanism of AT, should enhance diagnostic acumen and optimize therapeutic outcomes.”

The Impact of Arrhythmias on TAVR

Columbia cardiologists are collaborating with the vascular intervention team to look at the long-term impact of arrhythmias — specifically heart block and atrial fibrillation (AF) — on patients undergoing transcatheter aortic valve replacement (TAVR) procedures. In one study, the researchers examined the impact of AF on the incidence of and indications for pacemakers in patients undergoing TAVR. Evaluating data of 1,723 patients without pre-existing pacemakers who underwent TAVR, they found that conversion to AF is an independent predictor of permanent pacemaker implantation in these patients. Indications differ depending on heart rhythm, with patients in AF manifesting clinically significant tachybrady syndrome versus atrioventricular block.

As adults, many patients with congenital heart disease (ACHD) begin manifesting cardiac arrhythmias. NewYork-Presbyterian cardiologists are increasingly collaborating with their counterparts in the Hospital’s adult congenital heart disease programs both in the clinical arena and on research investigating the efficacy of ablation procedures. Research by Columbia faculty recently confirmed that aggressive therapy for arrhythmias, including catheter ablation, in patients with ACHD leads to better outcomes in the long term. In a complementary study, they sought to better define predictors of recurrence of atrial fibrillation following catheter ablation. The researchers concluded that BMI was a significant risk factor independent of Fontan status, which may help guide treatment decisions for persistent arrhythmias in the ACHD population. Findings were published in the November 19, 2018 issue of Congenital Heart Disease.

With the growth in understanding of the genetic underpinnings for a range of electrophysiological disorders, Columbia cardiology faculty have partnered with faculty in the Irving Institute for Clinical and Translational Research to form a Cardiogenetics Clinic within electrophysiology.

The clinic serves patients who have been identified or are thought to have an inherited genetic cardiac arrhythmia disorder, such as Long QT syndrome or Brugada syndrome. Through the new clinic, patients have their genotypes identified and assessed for treatment and risk stratification, with genetic testing also extended to at-risk biological relatives. The goal is to create personalized care plans to address and prevent potential cardiac problems in patients and their family members.

In one recent case, a 54-year-old man with a history of unexplained syncope underwent genetic testing for ECG suspicious for Brugada pattern. Genetic testing was positive for a known Brugada mutation and he received an automatic implantable cardioverter defibrillator (AICD). The patient subsequently experienced appropriate ICD shocks for ventricular fibrillation and was treated with quinidine. However, he was intermittently noncompliant due to side effects and experienced recurrent ventricular tachycardia and shocks. He then underwent epicardial right ventricular ablation and has not experienced ventricular arrhythmias in over a year off antiarrhythmic therapy. The patient’s family members were tested with some found to also have the mutation, putting them at risk of possible life-threatening arrhythmia. Those family members were then treated accordingly.

In a comprehensive review of these conditions in the May 2018 issue of Trends in Cardiovascular Medicine, Weill Cornell faculty noted that the most acute challenge in successfully treating malignant PVCs is in identifying those patients who are at high risk for developing sudden cardiac death before their first event. They believe it is critical to enhance fundamental understanding of the relative importance of PVC site of origin and PVC coupling interval in the triggering of fatal arrhythmias, as well as the dynamic interplay between the PVC and the underlying myocardial substrate. Furthermore, unraveling the potential role of previously unidentified polymorphisms may lend some clarity as to how a seemingly benign PVC is transformed into a malignant one.

Arrhythmia challenges are also being encountered more frequently in patients with advanced heart failure with ventricular assist devices because of improved survival rates. In a study of 249 consecutive patients who received an LVAD at Columbia, faculty found that 32 percent of patients manifested atrial fibrillation (AF) after device placement, including 13 percent who did not have a prior documented history of AF. However, the presence of AF was not associated with increased risk of death or stroke. To address this growing concern, our cardiologists continue to explore different ways of managing arrhythmias in these unique patients through medication combinations and ablation procedures. 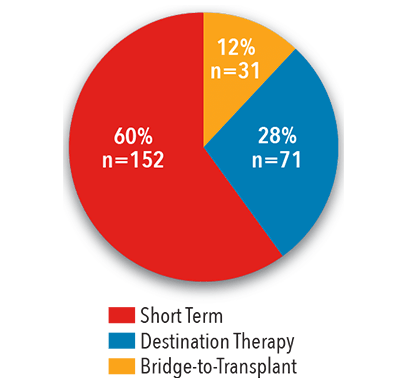 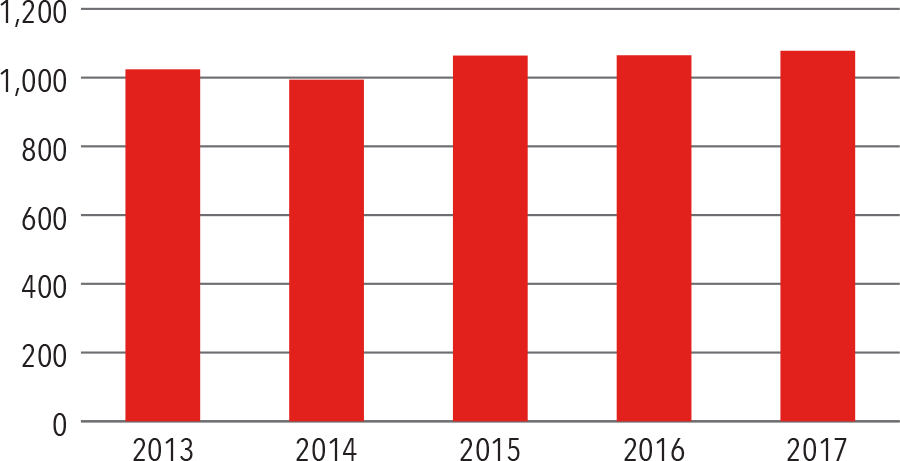 The left ventricular outflow tract (LVOT), a frequent source of ventricular arrhythmias (VA) in patients with and without structural heart disease, can present with unique mapping and ablation challenges. In the January 2019 issue of JACC: Clinical Electrophysiology, Weill Cornell faculty describe the complex anatomy of the LVOT and its adjoining structures, which is important for determining the sites of ablation and increasing success rates in targeting challenging LVOT arrhythmias. The authors note that juxtaposition of the aortic valvar leaflets, the coronary vessels, and the right ventricular outflow tract around the region of the LVOT can present both opportunities, as well as impediments, for successful treatment of LVOT VA with catheter ablation. The aortic root VA can be readily ablated with success from either above or below the valvar leaflets due to the limited extent of myocardial tissue incorporated at the bases of the aortic sinus of Valsalva. Intramural LVOT and LV summit arrhythmias are less readily accessed due to the presence of thicker anteroseptal myocardium and epicardial fat.

Atrial fibrillation (AF) can lead to blood clots, stroke, heart failure, and other heart-related complications. While the most common treatment for stroke risk reduction in patients with AF is blood-thinning therapies (warfarin and others), this treatment is not well tolerated by many patients and also carries a significant risk of bleeding complications. 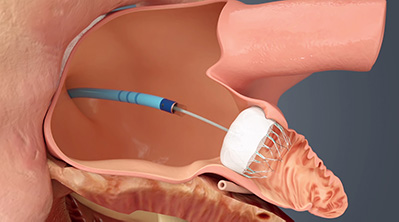 With the FDA approval of the WATCHMAN™ Left Atrial Appendage Closure Device, NewYork-Presbyterian is now providing a much-needed alternative treatment for patients with non-valvular atrial fibrillation at high risk for stroke who cannot tolerate long-term warfarin therapy. The procedure, which is typically performed under anesthesia in a catheterization lab, begins with a transesophageal echocardiogram to assess the left atrial appendage (LAA) anatomy and determine which size device to implant. After the interatrial septum is crossed using a standard transseptal access system, the WATCHMAN access sheath is advanced over a guidewire into the left atrium and then further advanced into the distal portion of the LAA over a pigtail catheter. The WATCHMAN delivery system, which has a mesh membrane that is spring-loaded to expand once it reaches the LAA, is then inserted into the access sheath and at the opening of the LAA. Once deployed, the permanent implant prevents blood clots from traveling into the systemic circulation.

At NewYork-Presbyterian, patients who have reason to pursue an alternative to blood thinners undergo a comprehensive evaluation and are discussed at an interdisciplinary meeting to determine if the WATCHMAN device is appropriate for them. During the procedure, an electrophysiologist and interventional cardiologist work together to complete the implant — a collaboration that leads to excellent outcomes.