Last December, while vacationing with family in the Caribbean, Harold Tanner tripped and fell, hitting his head. His son David, concerned because his father was taking Coumadin, called his father’s cardiologist at NewYork-Presbyterian/Weill Cornell Medical Center, Dr. David S. Blumenthal, for guidance.

“Even though it was Christmas Day, Dr. Blumenthal took the call,” says Harold Tanner. Dr. Blumenthal advised him to discontinue the Coumadin and quickly get to a facility where he could be given fresh frozen plasma and intravenous vitamin K to promote clotting.

“Harold received an MRI and the intravenous K in Anguilla, was then flown to St. Maarten and from there airlifted back to New York,” recounted Mrs. Nicki Tanner, wife of Harold Tanner. “Dr. Blumenthal arranged for an ambulance that took us directly to the medical team waiting at NewYork-Presbyterian/Weill Cornell.”

After several weeks of intensive care at the hospital and Burke Rehabilitation Hospital, Mr. Tanner returned home, continuing rehab as an outpatient. “My personal trainer noticed that I was tilting to the left and dragging my foot,” recalls Mr. Tanner. “I went back to NewYork-Presbyterian/Weill Cornell Medical Center for another MRI, which showed a subdural hematoma. In consultation with Dr. Blumenthal, I agreed to a new procedure developed by Dr. Jared Knopman to drain the bleeding in my head.” 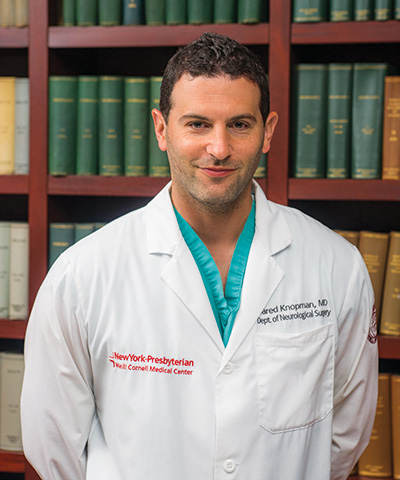 “Essentially, the way we’ve treated subdural hematoma for the last half century is through a craniotomy where we drain the blood to relieve pressure on the brain,” says Dr. Knopman, a neurosurgeon and interventional neuroradiologist with the Weill Cornell Brain and Spine Center. “But I had started investigating a new and innovative procedure to treat it without open surgery.”

As Dr. Knopman explains, “Whenever we take out a subdural hematoma in the OR we notice that the membrane that surrounds it is very friable and oozy. There is an inflammatory process where the hematoma can keep bleeding and re-bleeding. You have to stop this vicious cycle.”

In an open procedure, the surgeon removes the hematoma and cauterizes the membranes to stop the bleeding. “But we can only cauterize the membrane that we see,” says Dr. Knopman. “A subdural hematoma can encompass half of the skull, and we only open up a small part to drain the blood. Also, 15 percent will recur because these membranes continue to ooze in the area that you can’t shut down.”

Three years ago, Dr. Knopman read a case report from physicians in Asia who endovascularly embolized the middle meningeal artery (MMA) in a patient who had subdural hematoma that kept recurring after multiple surgeries to drain the blood. “It was a last-ditch effort to stop the bleeding and it worked,” he says.

Dr. Knopman built upon that concept and devised a procedure as an upfront alternative for patients who have subdural hematomas that would traditionally require surgery as a first-line treatment. He is the first physician worldwide to implement this.

“This is the procedure that I offered Mr. Tanner. We’ve done it in dozens of patients since. Instead of going to surgery as a first step, in a select group of patients, we embolize the MMA to see if the hematoma will disappear on its own.” 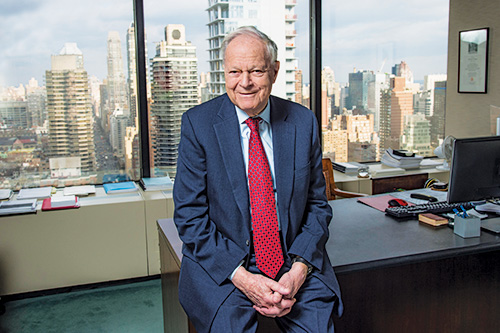 The reason why subdural hematoma is safe and amenable to treat with this approach, notes Dr. Knopman, is that the symptoms for many of these, like Mr. Tanner’s, are mild to moderate. Patients may have headaches, gait instability, some weakness, or even a seizure. “However, they are not decompensating in a rapid fashion, so you have the opportunity to do something less invasive and with no anesthesia,” he says. “Even though embolizing the MMA doesn’t drain the blood immediately, if it interrupts that vicious cycle it can allow the brain to organically reabsorb the blood. Mr. Tanner was among the first five patients in the world on whom I had performed this procedure for that indication.”

Dr. Knopman is the principal investigator in the only national trial currently underway to prove the efficacy of this approach in a larger cohort of patients. He has thus far performed it on some 50 patients who have had a subdural hematoma after surgery, and he has avoided open surgery in over 90 percent of patients who would have traditionally met the criteria for a craniotomy. Dr. Knopman says, “I believe this technique has the potential to change the standard of care for how we treat subdural hematoma in the future.”

“Dr. Knopman is the ‘wave of the future’ in that he’s one of many doctors who are looking for the least invasive way to achieve a better result,” says Mrs. Tanner. “I praise the hospital and Dr. Blumenthal for being accessible and being up on these latest innovations. And I certainly praise Dr. Knopman for what he’s doing. It’s just a miracle that this can be done noninvasively.”

“Mr. Tanner has given much to the Weill Cornell community,” adds Dr. Knopman. “For him to have benefitted from the procedure that was conceived within these walls is just an amazing thing. It comes full circle.”

Mr. Tanner is a Life Overseer on the Weill Cornell Medicine Board of Overseers.