Alan Lichtenstein is trim, exercises frequently, eats well, and had no inkling that he was having a stroke. However, the events leading up to his stroke have since provided some clues. Prior to that day, Mr. Lichtenstein had developed a mild case of shingles, and on May 17, 2017, respiratory problems sent him to his primary care doctor. “A cardiologist who was brought in diagnosed me with severe pericarditis,” says Mr. Lichtenstein, a manager of musical artists who lives with his wife and two sons in Manhattan. “A week later, I was home and managing the pericarditis. I was feeling better and had been invited to a Mets game. It was about 4 pm.”

Suddenly Mr. Lichtenstein felt dizzy and noticed he was having trouble navigating his mouse at the computer. He remembers dropping his phone in the kitchen and thinking that was odd. “I didn’t feel right and thought this was all related to the pericarditis. When you’re dealing with one thing you don’t think it’s anything else.”

When Mr. Lichtenstein couldn’t figure out how to use his phone, he called to his son Ethan for help. Ethan called his mother who immediately dialed 911. The NewYork-Presbyterian Mobile Stroke Treatment Unit (MSTU), on call this day at NewYork-Presbyterian/Weill Cornell Medical Center, responded, arriving at 4:30 pm.

Launched in 2016, the MSTU brings a neurologist and the advanced capabilities of an emergency department directly to the patient, providing neurological care that can be performed on the way to the ED. Developed in collaboration with the Fire Department of New York, the program is the first of its kind on the East Coast. 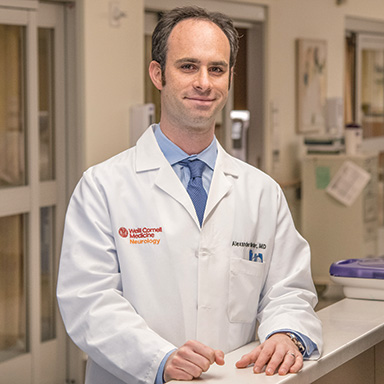 “I was riding in the ambulance along with a nurse and CT tech,” says Alexander E. Merkler, MD, a neurologist at Weill Cornell. “Mr. Lichtenstein’s exam was consistent with a probable stroke as he had both difficulty speaking and difficulty understanding what I was saying. On the way to the hospital, we scanned his head. The CT did not show any blood, so I administered IV tPA , the ‘clot buster,’ and he started to improve. By the time we reached Weill Cornell, he only had some minor difficulty speaking.”

Four hours later in the ICU, however, Mr. Lichtenstein’s condition deteriorated rapidly. “I remember thinking that my vision on the right side was awfully strange. I went to put my hand up and my arm was going limp. Clearly, I was taking a turn for the worse,” he says.

A rescan indicated a piece of clot had lodged in one of the arteries in his brain. The neuro team then paged Athos Patsalides, MD, MPH, an interventional neuroradiologist at Weill Cornell, who was on call that evening. “I was having dinner with my team when we got the call,” says Dr. Patsalides. “We started to review the patient’s images on our phones as we hopped in a cab. We arrived at the hospital about 15 minutes later.”

Mr. Lichtenstein was taken to the interventional neuroradiology suite where Dr. Patsalides and his team were waiting. “The clot was more distal than we typically see and treat. But this was a young patient at risk for severe disability if we hadn’t intervened,” explains Dr. Patsalides. “Given the patient’s cardiac history, we believe he had a second event and that the clot had formed in the heart and moved to the brain.” 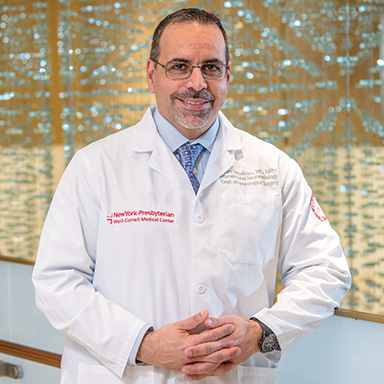 Dr. Patsalides performed a thrombectomy, inserting a tiny catheter with a stent retriever into the small artery of his brain. “We witnessed what’s called the ‘Lazarus effect,’” says Dr. Patsalides. “Thirty seconds after we pulled out the clot, I turned and asked the patient his name. He told me his name. I asked him how he was feeling. He told me he was feeling great. We started to have a conversation and about two minutes later he was completely normal. His arm was strong and his speech was intact. Within seconds, he went from being half-paralyzed and aphasic to where it was as if nothing had ever happened. It was very gratifying.”

“This is a remarkable story for two reasons,” adds Dr. Patsalides. “One is that he suffered two strokes in one day. But Mr. Lichtenstein was also very fortunate because the first stroke was successfully treated by the quick intervention of the Mobile Stroke Treatment Unit. And the second stroke occurred in a hospital with interventional neuro-radiology capabilities and a team of experts available to respond and proceed to surgery within 30 minutes of being called.”

“Time is of the essence, and that’s the beauty of the mobile stroke team,” says Mr. Lichtenstein. “They are able to give the immediate attention that can make the difference between someone like me who ends up in great shape versus those who may spend the rest of their lives in a wheelchair. The most important thing that I can do now is to raise awareness of what a stroke is and how important it is to deal with it in a timely fashion.”