Repairing an Aneurysm with Two Lives in the Balance

On August 1, 2016, just six weeks away from delivering her second child, Katarzyna Chomiak developed a severe headache. “It was Sunday and we were relaxing,” recalls Mrs. Chomiak, 41. “I told my husband Peter something was going wrong. I had migraines sometimes, but never this bad. And I started seeing lights and began to vomit.” 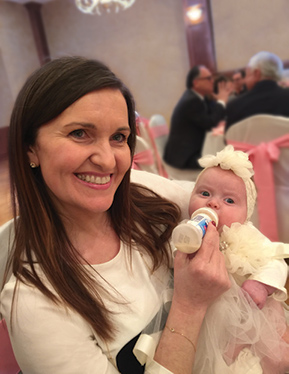 As his wife got dressed, Mr. Chomiak quickly texted Joshua B. Holden, MD, her obstetrician at NewYork-Presbyterian/Columbia University Medical Center, who directed the couple to get to Columbia as soon as possible. “At the hospital, I was given something for the pain, which was still enormous,” says Mrs. Chomiak, who was then sent for testing.

“An MRI showed no evidence of an aneurysm, and the neurological team initially thought that this was a cortical vein thrombosis with a hemorrhagic conversion of the stroke in the right frontal lobe,” says E. Sander Connolly, Jr., MD, Surgical Director of the Neuro-Intensive Care Unit at NewYork-Presbyterian/Columbia. “However, because of the atypical appearance of that finding, the neuro team persisted with imaging. A repeat MRI on August 4 showed extensive bleeding and a possible aneurysm on the right middle cerebral artery. So, what had initially been seen as negative for an aneurysm turned out to be positive for an aneurysm, and the whole workup took off. There is a lesson here that when things don’t quite make sense, you should keep looking and make them make sense.”

That same day, Alexander M. Friedman, MD, MPH, a Columbia maternal and fetal medicine specialist, joined Mrs. Chomiak’s healthcare team. “Our plan was to deliver the baby by caesarean section the day after her neurosurgical intervention,” says Dr. Friedman. “This was definitely an unusual scenario. Close communication among the neonatologists, neurologists, neurosurgeon, and anesthesiologist was critical in determining when it would be safe for her baby to be delivered. Having everyone on board and able to vocalize their concerns would be necessary to have a safe delivery, both for the mom and her baby.”

On August 5, Philip M. Meyers, MD, Clinical Director of the Neuroendovascular Service at NewYork-Presbyterian/Columbia, performed a preoperative angiogram that confirmed a subarachnoid hemorrhage and an intraventricular hemorrhage caused by a ruptured brain aneurysm. Mrs. Chomiak was immediately sent to the operating room where Dr. Connolly performed microsurgical clipping of the aneurysm.

“The location and anatomy of this type of aneurysm is almost always better for microsurgical repair,” says Dr. Connolly. Over his 20-year career, he has seen this condition occur several times in patients in the last trimester of pregnancy. “The highest concern is the life of the mother. Usually the babies tolerate the general anesthesia for the repair just fine as long as the mother is supine and the obstetric team helps to position her so that there is no weight on the vena cava. They also closely monitor the baby throughout the procedure.” 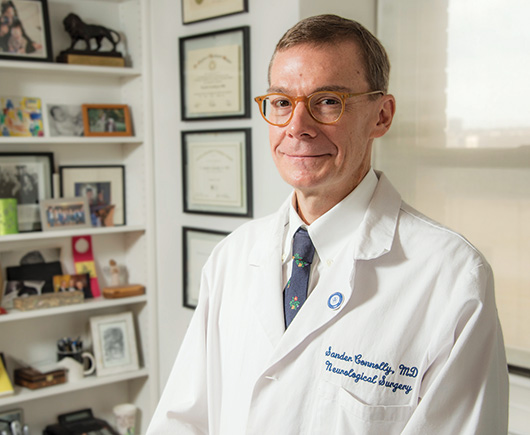 After an aneurysm is repaired, notes Dr. Connolly, patients can experience some degree of arterial vasospasm. “The blood that has been already spilled irritates the brain’s blood vessels,” he says. “Between four to 21 days after the bleed there is a period where the vessels squeeze down. It happens in about 90 percent of patients, but it’s not symptomatic in every patient and only in a minority does it lead to stroke. Vasospasm is generally treated with volume expansion, which a pregnant woman can easily tolerate. However, induced hypertension can cause vasoconstriction in the periphery and one of those arterial beds is the placenta, so it is a difficult balancing act.”

The neurosurgical team reasoned that if medications were ineffective, Dr. Meyers would be able to administer vasodilating medicine directly into the brain through angioplasty. “Vasodilating medicines have a short period of activity and are not a long-term solution and angioplasty can only reach certain areas,” says Dr. Connolly. “The situation was not without concern, however, in Mrs. Chomiak’s case, we all felt that the baby was old enough and lung maturity was good so that it was safe to proceed with the C-section.”

“After we decided with Dr. Friedman to have the caesarean, it was a very emotional moment for my husband and me,” says Mrs. Chomiak. “I think we realized how serious it could be.” On August 6, their daughter, Victoria, was delivered with no complications by Dr. Friedman and Cassandra Duffy, MD.

Throughout their ordeal, the Chomiaks received support through texts, emails, and phone calls from family and friends, here and in their native Poland. “We got such peace and strength that we were not worried,” says Mr. Chomiak. “We knew that the doctors were great and that Dr. Connolly is one of the best. We also knew we were at the right hospital at the right time with good and dedicated people in whom we had a lot of faith. We can’t thank them enough.”

According to the Brain Aneurysm Foundation, there is a 40 percent chance that a ruptured aneurysm will be fatal, and of those individuals who survive, 66 percent will likely suffer some permanent neurological deficit.

“Mrs. Chomiak is alive today and living a completely normal life without any neurological deficits, thanks to the seamless collaboration of our obstetrics team and neurological and neurosurgical specialists,” says Dr. Connolly. And now 15 months old, Victoria is an active, healthy toddler.