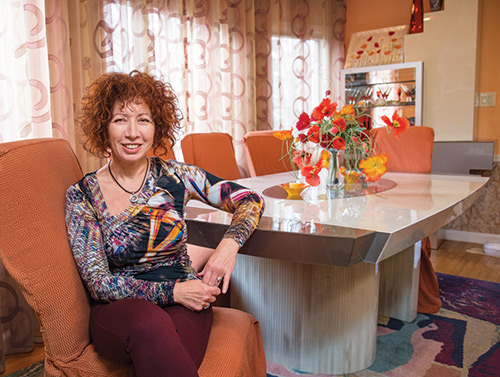 At first the signs were subtle. Lucy Shnayder, then in her early 40s and an IT specialist, would often go to the gym at lunchtime. “I had a personal trainer and during the sessions he asked me, ‘What’s with your right hand? When you raise it or when you walk, it doesn’t move or extend as much as your left hand,’” recalls Ms. Shnayder, now 55. “I had never noticed that and had never felt anything. Every once in a while when I was driving I had a tremor or shaking in my pinky, which I also didn’t pay much attention to.”

Ms. Shnayder did suffer from periods of vertigo, which had been getting worse, and it was then when her doctor suggested she see a neurologist. “I walked in with vertigo and walked out with Parkinson’s disease,” she says. “I was shocked. I didn’t expect anything like that. I had heard of Parkinson’s, but I never knew what it was about.”

Ms. Shnayder was referred to Cheryl H. Waters, MD, a neurologist at NewYork-Presbyterian/Columbia University Medical Center. “Dr. Waters is brilliant and I have been her patient for 11 years,” says Ms. Shnayder. “When the disease first started, it wasn’t that bad. But as the years went by, it became more advanced and I was forced to stop working. I was taking so many medications and feeling so bad that, to tell the truth, in my mind I felt like I was dying. It was a sad time.”

The Next Step: Deep Brain Stimulation 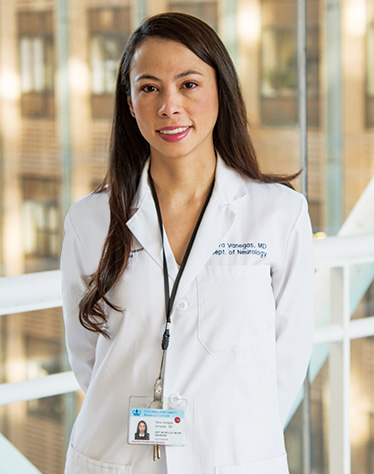 Dr. Waters suggested she see Columbia neurologist Nora Vanegas, MD, a specialist in deep brain stimulation (DBS). “I had participated in a number of clinical studies with Dr. Waters for which I am grateful,” says Ms. Shnayder. “She never pushed me to have the DBS. I guess she was waiting for me to be ready for it. I think it’s better that the patient herself is in control and decides when, why, and how. At the same time, you go into it not knowing whether it will help or hurt you. But I thought I would take the risk because if it didn’t help me, it might benefit someone else down the road.”

“Lucy had been managed primarily with medication for more than 12 years,” says Dr. Vanegas. “But she got to the point where her disease was so severe that we were not able to control all of her symptoms with medication, predominantly tremor and dystonia, and she had persistent side effects, including anxiety and dyskinesias.”

NewYork-Presbyterian was one of the first centers in the country to utilize DBS, the most important therapeutic advance in the treatment of Parkinson’s disease in the past 20 years. While DBS is not a cure for Parkinson’s, it effectively treats several symptoms that cannot be resolved with pharmacotherapy. There are two main DBS targets for the treatment of Parkinson’s disease, each with specific benefit profiles and therefore selected according to the predominant issues of each patient. Placing electrodes deep within the brain without incurring complications requires high quality imaging and careful surgical targeting.

“In the first stage of her treatment, Lucy was implanted with a new type of electrode that allows a more tailored DBS programming,” explains Dr. Vanegas. The latest generation of DBS devices enables physicians to precisely steer electrical stimulation in one specific direction. The novel leads also have the advantage of allowing the use of individual stimulation frequencies for each hemisphere using a single battery.

A week after implantation of the electrodes, Ms. Shnayder returned to the hospital to have the pulse generator implanted. “A month later Lucy came in to have the DBS turned on and be programmed,” says Dr. Vanegas. “The programming session involves a very thorough screening of every DBS contact to determine what benefits or side effects it will provide. At the end of the visit, we selected what was more beneficial for her during the screening session.”

“After a few weeks we did run into the difficulty of worsening Lucy’s dystonia and had to troubleshoot on that side of her brain,” continues Dr. Vanegas. “We were able to successfully do that due to the new technology.”

Ms. Shnayder underwent DBS in September 2017. “Dystonia was one of the most difficult symptoms to treat, and for me it was the worst of the symptoms,” says Ms. Shnayder. “It was also the first symptom to improve after my surgery.”

“The disease is still there and I still have to take medication, but a lot less,” she adds. “However, my quality of life is so much better. I started going back to my yoga classes. I started driving again and going places and seeing people. It is incredible what the whole team at Columbia has done for me. It’s literally like I am born again. When I talk about it, I get tears.”