For years, Justin Stone, 25, would often complain of headaches and vision problems. It was suggested that computer work may have contributed to these issues, and so the generally healthy young man continued on with his life until one day last March. “I was at work sitting at my desk, not feeling that great, and thinking, ‘Is someone dimming the lights? I didn’t think they could dim the lights in here.’ The next thing I knew I was being picked up off the floor,” says Mr. Stone. “I went home and later that day had a grand mal seizure.”

A local hospital diagnosed Mr. Stone with a tumor in the pineal region of his brain. Pineal tumors are rare, accounting for less than 1 percent of human brain tumors. Understanding the gravity of the situation, his parents quickly sought a referral to a major medical center. They were ultimately led to Jeffrey N. Bruce, Co-Director of the Brain Tumor Center and Director of Skull Base Surgery at NewYork-Presbyterian/Columbia University Medical Center. A leading authority on complex tumors of the skull base, with particular expertise in pineal tumors, Dr. Bruce has performed more than 200 of these surgeries, which rank among the most difficult neurosurgical operations. 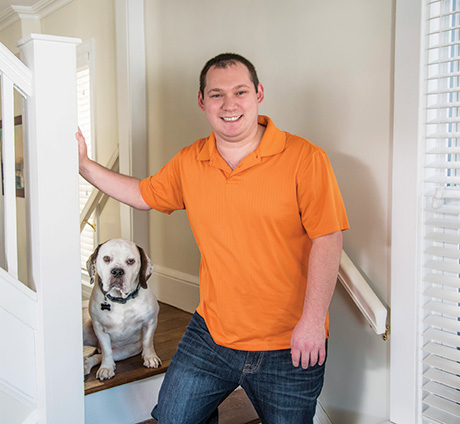 “While tumors in the pineal region are rare, Justin’s was an epidermoid tumor, which is even more rare,” says Dr. Bruce. “This benign, slow-growing tumor had likely been there for years until it reached a point where it was causing a blockage of the spinal fluid and irritating his brain, which led to his seizure.”

Dr. Bruce first developed an interest in pineal tumors during his residency at Columbia. “The chairman of Neurosurgery at the time, Dr. Ben Stein, had basically reinvented the approach for these tumors, which were considered inoperable back in the day,” says Dr. Bruce. “Patients did very poorly and many of them died. However, once the operating microscope came into being in the late ‘70s, Dr. Stein thought maybe it was time to rethink whether these tumors were inoperable or not. He pioneered some of the surgical techniques and taught them to me before he retired in 1996.” Since that time, Dr. Bruce has become one of the highest performing surgeons of this procedure in the world.

Transferred to NewYork-Presbyterian/Columbia in a life-threatening condition, Mr. Stone first underwent an endoscopic ventriculoscopy to address the hydrocephalus by creating a small hole in the bottom of the brain to relieve the pressure on his brain. Without this first procedure, it would have been very difficult to remove the pineal tumor because of the high pressure in the brain. Two days later, with the brain now relaxed, Dr. Bruce performed the second surgery.

“This is all done through a craniotomy,” explains Dr. Bruce. “We open the skull and enter between the two halves of the brain, and then complete the remaining part of the surgery under a microscope. It’s very important that the initial surgery be done correctly or you can doom the patient to further problems with the tumor if all of it is not removed.”

During the eight-hour surgery, Mr. Stone’s family waited anxiously for news. “After Dr. Bruce came out, we couldn’t have written a script any better than what he said – that it was successful and that he had removed 99.9 percent of the tumor,” recall Helen and Richard Stone. “We weathered the storm together, but Justin was incredible. As we reflect back upon it now, we each needed strength from each other, but he was the nucleus of the strength.” 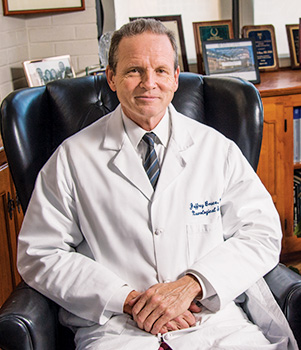 “My memory of the first couple of weeks following surgery is very scattered,” says Mr. Stone. “I did have bad double vision and it took a few months for that to resolve. I also had physical and occupational therapy, and that all went very well.”

“I have to say, Justin’s whole outlook on life, not unexpectedly, has changed since his surgery. He told me he’s never felt better,” says Mrs. Stone. “We are beyond grateful. I look forward to all the things that he’s going to get to enjoy and experience in life and that’s because of Dr. Bruce and his team.” “My goal right now is to get myself in good shape,” says Mr. Stone. “I’m working and enjoying my music, which is what I’m truly passionate about, and now I can actually focus on it. I don’t have any reason to be negative after everything else that’s happened to me.”

Dr. Bruce is also pleased with the result of the surgery. “Justin made a very nice recovery and his prognosis is excellent – he should live to be 100!”

Presently, Dr. Bruce is gathering data on the pineal tumor surgeries he has performed to date. “This is the largest series in the world. We’re trying to hone in on how the surgery affects patients’ outcomes. For example, we’re looking at how much of the tumor is removed in each patient and how well that correlates with outcome,” he says. “I’m hoping it will be the definitive paper on how to best manage these rare tumors and that it will provide an in-depth analysis of the risks and benefits of this complex surgery.”