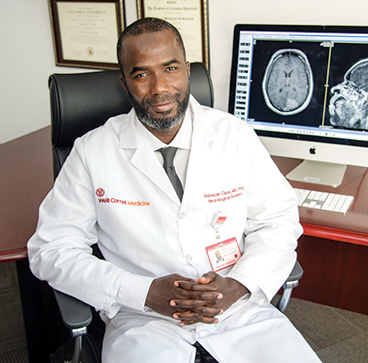 In May 2017, Nkiru Amaefuna, a young lawyer practicing in Abuja, Nigeria, began experiencing numbness and weakness in her right leg and intermittent shaking. An MRI showed what appeared to be an astrocytoma located quite close to her motor cortex, however, she was not offered surgery.

“I couldn’t walk properly and my symptoms were getting worse,” says Ms. Amaefuna, 25, who then traveled to New York to visit her aunt. During the visit, she had a focal seizure that sent her to the Emergency Department at NewYork-Presbyterian/ Weill Cornell Medical Center and to the care of Babacar Cisse, MD, PhD, a neurosurgeon with the Weill Cornell Brain and Spine Center.

“Nkiru had developed acute weakness and was unable to walk,” says Dr. Cisse. “A CT scan and MRI confirmed there was, indeed, a frontal parietal lesion, mostly parietal but actually deeper and with corticospinal tract infiltration.”

Lesions presenting in close proximity to eloquent cortex pose unique challenges. “The lesion was at least an intermediate grade primary glial neoplasm,” says Dr. Cisse. “We needed to have tissue to be sure what we were dealing with. Then with subcortical mapping, we decided we would be able to safely resect the tumor and spare her motor fibers.” 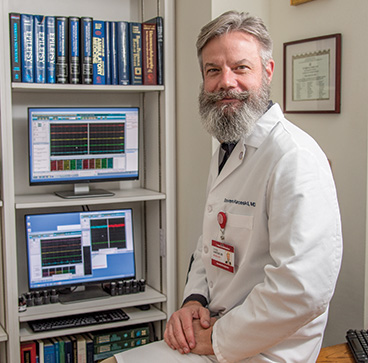 Neuronavigational systems in combination with anatomic and functional imaging advances have greatly advanced the neurosurgeon’s ability to effectively and safely resect lesions. “When the tumor is so low grade, it is very difficult to tell tumor from normal brain and whether it is white matter or not,” says Dr. Cisse. “If the tumor is in a region that can be mapped, we rely on motor or language mapping. With Nkiru, we were worried about the fibers coming from the motor cortex and going down through the brain stem to the spinal cord. If we were to damage those fibers, she would be permanently plegic.”

Neurologist Steven C. Karceski, MD, Director of Clinical Trials at the Weill Cornell Epilepsy Center, oversaw the intraoperative monitoring. “We conducted very detailed testing,” says Dr. Karceski. “While the surgeon is working on taking out the brain tumor, we simultaneously monitor her brain and nervous system for any signs that we are getting close to areas that must be preserved. There is constant communication between myself and Babacar as we work together to determine where to draw the line.”

The computer-assisted technologies in neuronavigation go beyond cortical mapping that look for motor movements, notes Dr. Karceski. “We continuously test the motor system, arm and leg, and face during surgery. An electrical impulse is sent every one to two seconds. If we see a change in our measurements, we can alert the surgeon that we are getting very close to the motor region. In combination with other tests, it is a very sensitive warning system.”

“ Before I got close to the motor fibers and the cortical spinal tract, I used a cortical stimulator and saw we were only a few millimeters from these fibers. This is another technology that enables the surgeon to maximize the resection while not risking critical structures.”
– Dr. Babacar Cisse

The Weill Cornell team also used high-definition fiber tractography, an advanced MRI-based imaging technique, with diffusion tensor imaging enabling them to track the fibers. “As I was resecting the tumor, I was using mapping as well as ultrasound,” says Dr. Cisse. “Before I got close to the motor fibers and the cortical spinal tract, I used a cortical stimulator and saw we were only a few millimeters from these fibers. This is another technology that enables the surgeon to maximize the resection while not risking critical structures.” 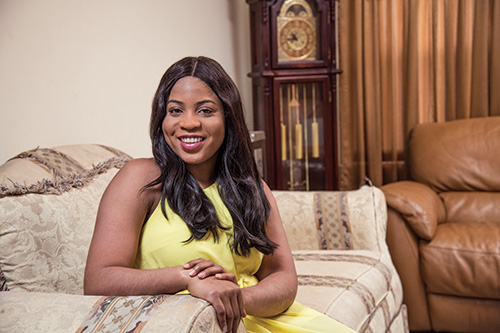 “The overall structure of the brain is essentially the same from one person to another, but the differences come in when we’re talking about millimeters,” says Dr. Karceski. “We test in order to know – within millimeters – where critical functions exist. In that way, we can get the most tumor out and give that person the absolute best possible outcome and response. That’s what the technology allows us to do.”

“We safely resected close to 98 percent of the tumor,” says Dr. Cisse. “Part of the problem with these tumors is that when they infiltrate, they can grow beyond what is seen on MRI or ultrasound. You want to have a very good margin. In Nkiru’s case, we were limited when we discovered we were within less than five millimeters from her cortical spinal tract.”

Ms. Amaefuna and her family are presently in New York while she undergoes chemotherapy and radiation. “Initially, I could barely have a serious conversation and I was having memory problems,” she says. “Now it’s getting a lot better.”

Ms. Amaefuna says she is grateful that she received treatment at NewYork-Presbyterian. “I couldn’t have imagined having it anywhere else. After surgery, I read online how some people recover from this treatment, their complications and the rest. I realized that mine was very smooth.”