Hydrocephalus and intracranial cysts are conditions that result from the abnormal buildup of cerebrospinal fluid (CSF) in the brain.  Both conditions affect newborns and children of all ages and, if left untreated, can lead to intellectual, developmental and physical disabilities. Children with hydrocephalus or intracranial cysts need specialized care like that found at NewYork-Presbyterian, where expert pediatric neurosurgeons collaborate with other pediatric specialists to determine the root cause of the problem and create a comprehensive treatment plan that gives your child the best chance to live to their fullest potential. At NYPH we have the most refined and innovative diagnostic and therapeutic tools available to insure optimal care for each child.

Hydrocephalus is a condition that is caused by an increase of cerebrospinal fluid (CSF) in and around the brain that can occur at the time of birth or during infancy, childhood or adolescence.

Normally, the circulating CSF is constantly replenished and absorbed, so that the amount of fluid inside the brain and skull remains basically constant over the course of a lifetime. Hydrocephalus occurs when the orderly balance of cerebrospinal fluid (CSF) in the brain is altered. This disruption can occur when CSF is overproduced, or not properly absorbed and/or obstructed by a blockage.

Hydrocephalus can occur during pregnancy, and when it does, it is labeled congenital hydrocephalus. Other instances of hydrocephalus arise after birth. Possible causes include bleeding, infection, trauma, tumors, vascular problems, spina bifida, and structural problems.

There are two main  types of hydrocephalus, and they occur in different compartments of the brain. This distinction provides a solid foundation for determining management options:

Symptoms of hydrocephalus are age dependent. During early infancy, hydrocephalus is usually detected by the family or pediatrician as macrocephaly (an abnormally large head); macrocephaly rarely occurs later in infancy and childhood.

Common symptoms for newborns and infants include:

Symptoms during older childhood and adolescence may include:

If your child has any of these symptoms, he or she should be evaluated to determine if diagnostic imaging is needed, because hydrocephalus can cause neurological damage as it puts pressure on surrounding brain tissue. Since many of these symptoms can be caused by a range of other conditions, an accurate diagnosis is critical.

What is an Intracranial Cyst?

An intracranial cyst is a small, benign collection of fluid that develops when part of the brain’s membrane forms a pouch and fills with CSF. The exact cause of a primary intracranial cyst, which develops in a fetus during pregnancy, is unknown. Arachnoid cysts represent the most common form of intracranial cyst. These can occur in various locations in the brain and seldom cause symptoms.  Other less common forms of cysts are secondary cysts, which can be caused by a variety of conditions including trauma (a fall, accident, or other injury), infection, brain tumor, developmental malformation, or as a complication of brain surgery. MRI is very accurate in determining the type of cyst and treatment options if needed.

Symptoms of an Intracranial Cyst

Symptoms of an intracranial cyst depend on the cyst’s size and location. Small cysts are usually asymptomatic and are discovered only incidentally. Large cysts may cause cranial deformation or macrocephaly as a result of hydrocephalus, particularly among infants and young children whose skulls still have fontanels. Some cysts can cause noncommunicating hydrocephalus by direct compression on the normal intraventricular circulation.

An intracranial cyst that causes any of these symptoms needs to be evaluated for possible treatment, as it may continue to grow and cause neurological damage as it puts pressure on surrounding brain tissue. Since many of these symptoms can be caused by a range of other conditions, an accurate diagnosis is critical. 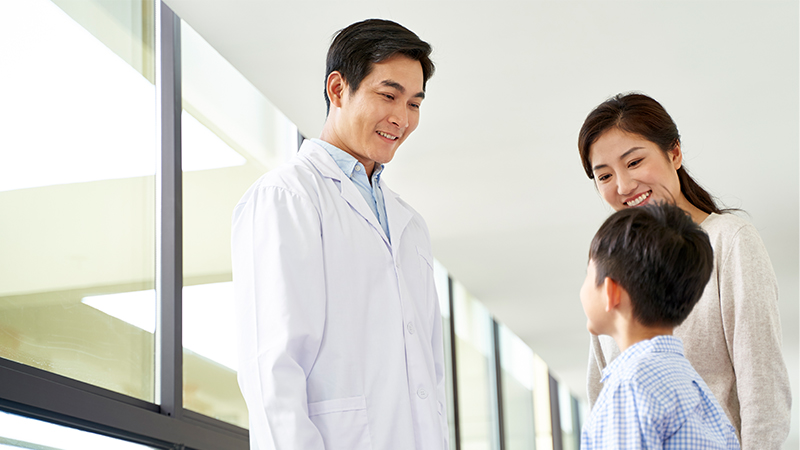 Our pediatric neurosurgeons use minimally invasive surgery whenever possible to ensure the best results and the fastest recovery possible. Across our state-of-the-art facilities, we employ the latest and least invasive devices and techniques, such as the endoscope, robotics, and surgical planning software, for the best possible outcomes.

Because we are part of a world-class medical center, we have the ability to centralize care for our patients and connect our patients to providers in more than 100 specialties and subspecialties. When the time comes, we can provide the support patients and their families need to ensure a smooth transition from pediatric to adult care.