Hope is on the Horizon for Pancreatic Cancer 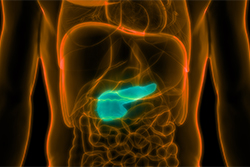 There is hope on the horizon in the battle against pancreatic cancer, the fourth leading cause of cancer-related death in the United States. Deemed a “silent” killer because it has no symptoms in its earlier, more treatable stages, pancreatic cancer is often too advanced at diagnosis to be effectively treated. As a result, more than 90 percent of pancreatic cancer patients die within five years of diagnosis and only 7.7 percent survive beyond five years. However, earlier intervention in people at risk and the development of new therapies for pancreatic cancer offer some promise to save more lives.

People with a strong family history or genetic abnormalities associated with pancreatic cancer may be monitored to detect early signs of the disease before symptoms emerge. This is done with imaging tests such as endoscopic ultrasound or blood tests that screen for the presence of CA19-9, a tumor marker for pancreatic cancer.

Because pancreatic cancer is curable in its earliest stages, it is critically important to be diagnosed and treated at a comprehensive cancer center where the patient can access a multidisciplinary team with extensive experience in assessing and designing individual treatment strategies.

To learn more about pancreatic cancer and cancer care at NewYork-Presbyterian, visit nyp.org/cancer. To find a cancer specialist, please call 877-697-9355.