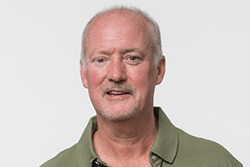 After a long day of running a busy kitchen at one of New York City’s top clubs, executive chef Tom Myers would wind down the day by riding home on his motorcycle.

“After a stressful day, riding my bike was my release,” he says. “After being in a hot kitchen all day, you get the nice breeze in your face. It relieves a lot of stress. It was the highlight of my day.”

However, on September 14, 2014, his relaxing ride home ended abruptly when a vehicle that was making a left-hand turn hit him. The collision flung the 56-year-old married father of two adult children into the air and totaled the bike.

Tom was taken to the emergency department of NewYork-Presbyterian Queens, where he was rushed into surgery to treat a myriad of injuries to his left leg, including a shattered ankle and tibia, and an injury to the main artery in his leg. Dr. Andy Lee, a vascular surgeon, removed a vein from Tom’s right leg and transferred it to his left to restore blood flow to the leg. A fasciotomy was performed to relieve pressure to his calf muscle. He was put under sedation for several days to ease the pain.

“It was all a blur; I just remember them slicing off my clothes. Next thing I know I woke up days later,” he recalls. “My family doctor was there when I woke up. He said to me, ‘you were in a very bad accident, but you’re going to be OK now.’ And he was right.”

Under the direction of Dr. Jason Sample, chief of Acute Trauma and Critical Care, the SICU trauma team cared for Tom as a long-term treatment plan was being developed. Tom recalls being treated with care and compassion by many trauma team staff, including SICU Assistant Director Ronald Combs, PA.

While in the SICU, Tom’s doctors outlined several treatment options to his family. If they attempted to salvage his left leg, he would need a metal plate put in to hold together the broken bones. But he did not have enough muscle to cover the plate because the muscles in his left calf died due to a lack of blood supply. To get more muscle for the leg, doctors would have to perform flap surgery, a procedure in which tissue is lifted from a donor site and moved to a recipient site with an intact blood supply. The doctors would need to use his back muscle to cover the plate.

Some doctors thought it the better option was just to amputate the leg. But, Dr. Elan Goldwyn, director of orthopedic trauma surgery, and Dr. Elizabeth Sieczka, a voluntary faculty member of NewYork-Presbyterian Queens practicing plastic surgery, took the chance to save Tom’s leg.

Tom says, “There were doctors who told my wife it was pointless to keep the leg because I’d never walk again. Then Dr. Sieczka went to my wife and said, ‘I might be able to save his leg.’ My family decided if it’s possible, save his leg.”

The night before Tom’s surgery, Drs. Goldwyn and Sieczka warned Tom the surgery might not be successful. “They told me there was an 80 percent chance they would have to amputate the leg above the knee. But I knew this was my best option,” he remembers.

To preserve the leg, Dr. Sieczka had to use the latissimus dorsi muscle — the large flat muscle on the back — as a replacement muscle for the now dead calf muscle. At the same time, Dr. Goldwyn would reset Tom’s shattered tibia and ankle.

After a twelve-hour operation, he woke up with both legs. Tom endured nine surgeries during his hospital stay.

Over the next two years, Tom had intense physical therapy. He had to re-learn to walk, shower, sit, stand and other ordinary tasks. Tom is still in physical therapy and struggles to walk and cannot return to work. He is considering other exploratory methods to elevate some of the constant pain.

“My life was completely rearranged in a matter of seconds. I’m scarred for life. But with the support I had from my family, friends, the doctors and therapists, I was able to build another life for myself,” he says. “I’m eternally grateful to the doctors at NewYork-Presbyterian Queens. They thought outside the box and saved my leg.”