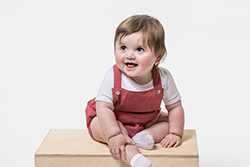 With nine children, Mordechai and Chana were no strangers to the ups and downs of parenthood. But even they could not have expected the news they received in August 2017 when their youngest child, daughter Toba, was only three weeks old. Concerned about a rapidly growing head size, their pediatrician suggested they see a neurosurgeon. Guidance from community organizations (the Rofeh Cholim Cancer Society and Refuah Helpline) and other parents led her to one specialist at NewYork-Presbyterian Komansky Children's Hospital: Dr. Mark Souweidane, Director of Pediatric Neurological Surgery at NewYork-Presbyterian/Weill Cornell Medical Center.

An ultrasound showed the presence of a large mass in her brain, which an MRI later confirmed to be a gigantic brain tumor occupying as much as two-thirds of the space inside her skull. It was by far the largest brain tumor Dr. Souweidane had ever seen in his 22-year surgical career.

Brain tumors detected at the time of birth, called congenital brain tumors, are extremely rare and almost universally fatal. By most estimates, either the tumor or its treatment was likely to prevent Toba from reaching two months of age. Dr. Souweidane and his team were determined to do all they could to beat those odds.

A biopsy performed by neurosurgeon Dr. Caitlin Hoffman provided some relief: the tumor was a benign teratoma. But even benign tumors inside the brain are a threat because as they grow, they compress vital structures. Toba's only choice was surgical removal. Yet the sheer size of her tumor, the involvement of vital blood vessels in the brain, and Toba's tiny size relative to the blood she could lose during the operation were all factors that were not in her favor.

"Dr. Souweidane told us he would treat Toba like his own child. He said he would remove as much as he could, while keeping in mind that his goal is always to keep the child safe," recalls Chana. "He is phenomenal, and he explained everything to us so well. Even when discussing what might happen, he passionately wrapped it up in a soft blanket of optimism and hope, so we wouldn't feel dismayed. After speaking with Dr. Souweidane, we always left the room with a smile." Buoyed by their confidence in him, Mordechai and Chana proceeded with the first surgery.

On September 2017, when Toba was just two months old, Drs. Souweidane and Hoffman removed nearly half of the tumor in a 10-hour operation. Not surprisingly, her recovery was rough, complicated by seizures, but over time she returned to her normal, joyous self.

The doctors gave Toba as much time as possible to gain weight and increase her blood volume before a second planned surgery. MRI scans eventually showed the tumor growing again when Toba was six months old. The surgeons removed virtually all of the remaining tumor tissue during a second multi-hour procedure. Due to the small bit of tumor they had to leave behind, the family and surgeons braced themselves, wondering if Toba could tolerate a third marathon brain surgery.

Then the unthinkable happened: a follow-up MRI showed no tumor. The first two surgeries deprived the remaining tumor tissue of the blood supply it needed, and it disappeared.

As Toba approached her first birthday in July 2018, there was no evidence of her ordeal. The surgery and her hospital experience resulted in some developmental delays, which are being addressed through physical, occupational, and speech therapy she can receive in her home. She continues to progress nicely and by all accounts should have a normal childhood.

Her family is overjoyed by the prospect that their little girl has beaten all odds and is likely cured. "She's doing amazing — very smiley and playful. She looks normal, like nothing happened," says Chana. "Dr. Souweidane doesn’t perceive his occupation just as a profession, but as a humanitarian mission to save lives. My husband and I keep on thanking the almighty G-d for leading us on the right path to the world-renowned NewYork-Presbyterian Hospital, to a great team who brought a cure and relief to our beloved daughter.”