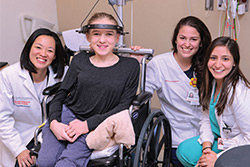 As a baby, Seattle-native Solomiya Dezhnyuk suffered spinal cord infections that caused her to develop scoliosis. As she got older, her condition steadily worsened, creating a large protruding bump on her upper back and compressing her organs. After conducting two unsuccessful surgeries, Solomiya’s doctor referred her to Dr. Lawrence G. Lenke, an orthopedic surgeon and surgeon-in-chief at NewYork-Presbyterian’s Daniel and Jane Spine Hospital. Although her deformity was the most severe that Dr. Lenke had seen in over two decades of practicing spine surgery, he was determined to do whatever it took to allow the high schooler to escape a life of constant, debilitating pain.

Solomiya spent six weeks in “halo” traction to stretch out her spine before surgery. Although the process was long and painful, she faced it with strength and bravery, and her care team became like family to her. When she went in for surgery, they were in tears, but they knew that the procedure would change her life, allowing her to grow several inches and walk, breathe and sleep normally.

Dr. Lenke performed a vertebral column resection on Solomiya — a rare, complex surgery that involves breaking the spine in the middle, separating it into two pieces, correcting the pieces into a new position and then using instruments to fix the spine into that position permanently. During the process, a group of specialists conducted careful neurophysiological electric monitoring to ensure that all of her nerves were still functioning. After two 10-hour surgeries, Solomiya emerged with a straightened spine and a new lease on life.

“Right when I woke up, it was so much easier to take a deep breath,” she says. Her dedicated rehabilitation team worked with her for weeks to help her gain the independence she needs, and now she is attending Washington State University. “It’s a miracle to me that I am walking on my own with no walker after six months,” says Solomiya.