I think people in the hospital are such unsung heroes. It's a thankless job, a lot of times, what these people do. Literally saving lives. 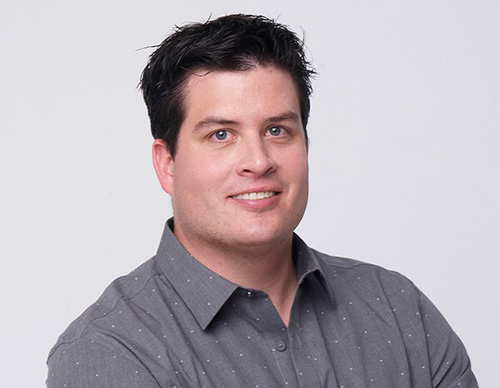 Thirty-year-old Trevor MacMeekin felt terrible as he got ready for work one Monday morning in April 2014. He was in the throes of an ulcerative colitis (UC) flare-up when he developed a splitting headache that would not go away all weekend. The young father of a newborn son was home alone and couldn’t shake the feeling that something was wrong.

“I hadn't felt this way before. I've had headaches before, but not to this magnitude,” he recalls. “I put myself into a cab and went to the emergency department at NewYork-Presbyterian Lower Manhattan Hospital. It was there that they did a lot of tests to realize I had clots in my brain and that a stroke was going to happen. I was actually in the hospital when I had the stroke.”

For patients having a stroke, time is essential for recovery. As a stroke progresses, nervous tissue is lost rapidly. The American Stroke Association estimates that 120 million neurons and 830 billion synapses are lost each hour an ischemic stroke is untreated. This can lead to long-term balance problems, cognitive deficits, and speech problems.

“I don't remember a lot of the time of the actual stroke or leading up to it or right after. But reflecting months and years later, I realized how lucky I am, and fortunate, to be in the right place when it happened and be in such good hands to save my life,” he says.

Because Trevor was in the Hospital even before the onset of the stroke, doctors were able to reach out to the emergency department at NewYork-Presbyterian/Weill Cornell Medical Center, which has a more extensive stroke treatment program. Trevor was transferred to NewYork-Presbyterian/Weill Cornell where Dr. Dana Leifer, a vascular neurologist, treated Trevor for an unusual cause of stroke that is caused by clots inside the veins that drain blood away from the brain and that is more common in patients with ulcerative colitis. This type of stroke causes damage to the brain because blood backs up in the blocked veins so that fresh blood cannot deliver oxygen and nutrients to the brain and the pressure of the blood when it backs up can result in bleeding into the brain. Because Trevor's stroke could not be treated safely with TPA, the drug that is often used to dissolve blood clots that cause strokes by blocking arteries, Dr. Leifer initiated treatment with carefully monitored doses of blood-thinning medicine to prevent the clots in Trevor's veins from extending further. These treatments limited the damage, but Trevor still needed rehabilitation therapy to maximize his recovery.

“Not being able to speak is incredibly frustrating. I knew what I wanted to say, but the words wouldn't come out. But I was blessed with incredibly good therapists, speech therapists right away, shortly after I had the stroke,” he says. “It was like going back to first grade English class and learning to sound out words again. Eventually, miraculously, it came back to me over time.”

Determined to recover quickly and return to his young family, Trevor spent several months in the hospital recuperating before returning home. He then started an even longer journey of rehabilitation under the direction of Dr. Michael O’Dell, a physical medicine and rehabilitation specialist at New York-Presbyterian/Weill Cornell. Eventually, Trevor re-learned how to talk, walk, and perform basic tasks like dressing himself or tying his shoelaces.

A few years later, Trevor found himself again at NewYork-Presbyterian Lower Manhattan Hospital to receive life-altering treatment: this time for the ulcerative colitis — an inflammatory bowel disease that causes sores and inflammation in the digestive tract — that affected him during his stroke. Ulcerative colitis can be debilitating, and in certain cases can lead to life-threatening complications, including colon cancer and blood clots.

Trevor had been under the care of Dr. Daniel Hunt, FACS, a colorectal surgeon at NewYork-Presbyterian Lower Manhattan Hospital, since receiving the diagnosis of UC in 2013. Over four years, Dr. Hunt performed more than a dozen procedures to try to relieve Trevor’s pain. Dr. Leifer, who continued to act as Trevor's neurologist, guided the use of blood-thinning medicines around the time of these procedures so that they could be done safely by stopping the medicines for the minimum time needed to reduce the risk of bleeding during surgery and at the same time avoiding stopping them for too long to minimize the formation of more clots that could cause another stroke.

“It's a disease that people don't like to talk about because it deals with, you know, your bowels and your GI tract and the things that are a little taboo,” he explains. “It was so painful, and the medicine wasn't working. I opted for surgery because it was the best option because having young kids and me being young myself, I wanted to be able to run around with them, to play in the backyard, to coach them in sports, to kiss them goodnight without pain.”

Motivated to help patients like himself, Trevor joined the Patient-Family Advisory Council (PFAC) at NewYork-Presbyterian Lower Manhattan Hospital. Each NewYork-Presbyterian campus has a PFAC, which brings together patients, their families, clinicians, staff, and hospital administrators to find ways to enhance the Hospital’s delivery of patient and family-centered care. Volunteers, like Trevor, have worked with departments across the organization to create new policies and new programs, host community outreach events, and develop patient guides.

“PFAC is a way to explore what is good and bad about the hospitals. They want people that have been there in the hospital for an extended time, or even a short time, to give feedback,” he says.