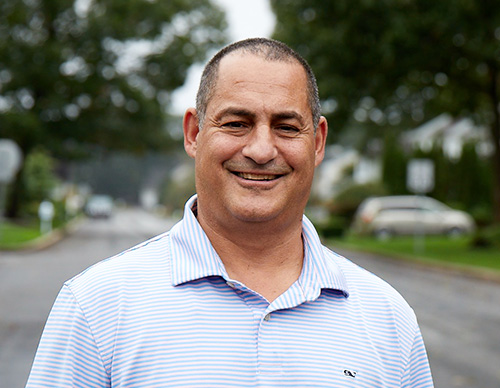 Dr. Shah was amazing from the very beginning.

In December 2013, Sandy Kyrkostas was at an ice rink in Massachusetts watching his son play in a hockey tournament when he began to feel unwell. For some time, the TV and film producer had been experiencing diarrhea, coughing a bit, and occasionally feeling dizzy, which he treated with over-the-counter medication. But he could no longer ignore his symptoms.

“I couldn’t stop shaking, even when I went back to the hotel and got under the covers. I thought I was getting the flu,” says Sandy, now 53.

He called his doctor, who advised him to go to a local emergency room. But Sandy preferred to be closer to home and that day headed back to Long Island. At the ER on Long Island, a colonoscopy revealed that he had two large tumors in his colon, which necessitated surgery to remove part of his colon.

“When I woke up, the only thing I wanted to know is if I’d need a colostomy bag,” Sandy recalls.

The doctors told him he didn’t — which was the last bit of good news he received for a long while. He had colon cancer, and it had metastasized or spread to his liver.

“They told me it was stage 4. I didn’t even know what that meant,” Sandy recalls. “When you hear the word cancer, you just think, ‘I’m dead.’”

Sandy’s prognosis wasn’t promising. His oncologist told him that the remaining cancer in his liver was inoperable and that, at best, chemotherapy might keep him alive for six months to a year.

Not willing to give up, Sandy and his wife, Michelle, saw an oncologist at another cancer center, where doctors told him to get his affairs in order.

“It’s hard to explain what it feels like to be told you’re dying,” Sandy says. “I felt numb. I felt hopeless.”

But in January 2014, a determined Sandy and Michelle made the journey to Manhattan to meet Dr. Manish Shah, chief of the solid tumor oncology service at NewYork-Presbyterian/Weill Cornell Medical Center and director of the gastrointestinal oncology program at Weill Cornell Medicine. At that meeting, Dr. Shah sprang into action, telling Sandy that he wanted him to get more scans and that he should get ready to have a port put in for chemotherapy, starting the following week.

“I told him I lived 50 miles away and asked if we could do everything that day,” Sandy recalls. “Dr. Shah started making phone calls, and he got me in for a brain scan, a liver scan — he got me in everywhere. He stayed until 7 pm that night.”

While reviewing his scans that evening, Dr. Shah noticed blood clots next to Sandy’s portal vein and wrote a prescription for self-injecting blood thinners. On his ride home, Sandy received a call from Dr. Shah’s office, telling him to start the medication ASAP.

“They were on it,” says Sandy. “Dr. Shah was amazing from the very beginning.”

In addition to the blood clots, Sandy’s scans showed his colon cancer had spread to multiple parts of his liver. Dr. Shah’s approach was to treat the cancer aggressively, knowing that if the remaining disease was limited to Sandy’s liver, there was a chance to eradicate it. Dr. Shah reviewed Sandy’s case with the hospital’s tumor board, where doctors from a variety of disciplines meet weekly to discuss difficult cases.

Together, they decided to take a multipronged approach — starting with chemotherapy followed by directed treatment of the liver metastases, which would include surgery and interventional radiology.

Sandy had 12 courses of chemotherapy — first in the hospital, then taking the rest of the infusion home in a fanny pack.

Within the first few months of Sandy’s treatment, the chemotherapy shrank his tumors by one-third to one-half their original size. Importantly, cancer wasn’t found anywhere other than the liver, making treatment to Sandy’s liver a reasonable option.

In April 2014, Sandy had resection surgery to remove part of his liver that had multiple tumors. Since many of Sandy’s lesions were too close to a major vein to be safely removed an interventional radiologist performed microwave ablation, which used the heat generated by microwave energy to destroy the remaining lesions in the liver. Dr. Shah then administered another course of chemotherapy, and by the end of 2014, Sandy was finished with treatment. Based on scans, he was rendered free of cancer.

But the cancer came back in the spring of the following year. Sandy went in for another ablation, and another when the lesions returned several months afterward.

Then, in 2016, when Sandy had yet another recurrence, Dr. Shah began working with Dr. Karim J. Halazun, a liver transplant and hepatobiliary surgeon with the Liver Transplantation and Hepatobiliary Surgery program at NewYork-Presbyterian/Weill Cornell Medical Center.

Sandy’s case proved to be difficult. Because of scar tissue from Sandy’s previous surgeries, it was more difficult to lift out his liver, extending the surgery beyond the five to six hours originally projected. Once Dr. Halazun had isolated the liver and could see it clearly, he realized that the entire right lobe needed to be removed. He ended up removing 60 percent of the organ.

“Depending on the patient, it’s possible to remove 65 to 70 percent of a person’s liver and still have it regenerate,” explains Dr. Halazun. “Within six weeks, in a normal liver, the volume of the remaining liver doubles.”

With the right lobe removed, another surgeon came in and reconstructed Sandy’s abdominal wall to repair a gigantic hernia.

Michelle grew anxious when the surgery took longer than expected, but “when they came out, the surgical team was really optimistic,” she says. “Just knowing that the cancer was out of his body made me feel good.”

Sandy spent 12 days recovering in the hospital. All told, he had undergone a dozen major procedures, surgeries, and ablations. Once he returned home, he was so weak that he had to learn to walk again.

For two years after his major surgery, Sandy lived in remission. But in October 2018, when blood appeared in his urine, tests showed that the colon cancer was back; this time, it had spread to his bladder.

“I was in a dark place,” Sandy says. He then took on his new challenge with gusto. “I will get past this,” he said at the time. “Just add this to my résumé.” Sandy underwent surgery again. Dr. Douglas Scherr, an attending urologist at NewYork-Presbyterian/Weill Cornell Medical Center and professor of urology and clinical director of urologic oncology at Weill Cornell Medicine, removed the tumor from Sandy’s bladder wall using a robotic procedure.

Since then, Sandy has been disease-free. “His risk of recurrence still remains high,” Dr. Shah says, “so we’ll continue to monitor him, but he’s doing quite well.”