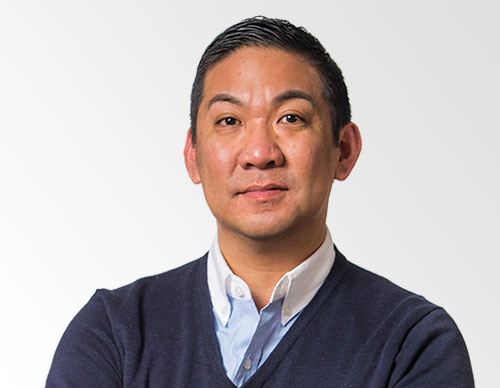 I was very comfortable with my doctors. They gave me the utmost confidence that they knew how to treat me and that I’d be fine. It was a no-brainer for me to stay in New York.

Just after his 39th birthday, Robbie Magat was diagnosed with cancer. It was a Friday night when he learned his diagnosis and by Monday he was in treatment. A year later, he was declared cancer-free just in time for his 40th birthday.

But what a year it was. While seeing an allergist for a persistent cough, Robbie never imagined he would find himself facing the same cancer his brother had fought 10 years earlier. Suspecting something more than allergies, his doctor referred Robbie to NewYork-Presbyterian, where physicians quickly diagnosed him with stage III non-Hodgkin's lymphoma — a cancer that is not generally hereditary — and recommended he begin treatment immediately.

“So here was the dilemma: the doctors were saying I had to act fast, because the cancer was already at an advanced stage,” says Robbie, who is originally from California. “Do I pack up and have all of my treatment in California near my family, or do I stay put in New York where I have lived for 10 years?” The decision to stay in New York became clearer once a colleague shared her own cancer experience at NewYork-Presbyterian nearly 20 years earlier, and when he met Ok-Kyong Chaekal, MD, a Weill Cornell medical oncologist, who performed his biopsy. “She was reassuring when telling me the results and inspired confidence while explaining exactly what would need to be done.”

With a diagnosis of non-Hodgkin's lymphoma in hand, Robbie was referred to oncologist, Peter Martin, MD, Director of the Weill Cornell Clinical Research Program in Lymphoma at NewYork-Presbyterian/Weill Cornell Medical Center. Dr. Martin developed a treatment regimen that would allow Robbie to receive his chemotherapy at home with an infusion pump. “That I could do all my treatments at home was great news,” says Robbie. “I would take a car service from Hell’s Kitchen, across the park, to the infusion center at Weill Cornell, where a nurse would quickly exchange my bag. Then I would hop back in the car and go home to rest. The whole team was always on hand to answer any questions, and their attentive care was reassuring to me and my family in California. With the help and support of coworkers and friends, I believe that being able to stay home in New York and live my life as normally as possible helped in my speedy recovery. It is the spirit and resilience of this great city that kept me going!”

Robbie celebrated his newfound health with a 40th birthday party with friends and family flying in from all over the world. “They were just so happy to see me cured and back on my feet in time for my 40th year.”