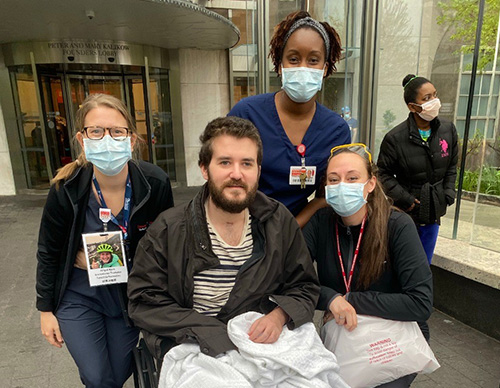 We felt embraced and protected by the institution. Everyone was very accommodating, despite the pandemic.

In early February 2020, Pedro’s entire life changed. A resident of Santiago, Dominican Republic, he had fallen in the house of a family friend and was found unconscious at the base of the stairs on the morning of February 8, bleeding from a wound on the left side of his head. After an air ambulance journey from Santiago to New York City, stabilization of his condition by neuro-critical care experts at NewYork-Presbyterian/Weill Cornell Medical Center, and weeks of rehabilitation by a team of dedicated therapists, Pedro, 31, returned home on April 30, ready to continue his journey to recovery.

The first step in Pedro’s treatment was transport by a medevac helicopter from the accident scene to Hospital Metropolitano Santiago. His father, Pedro, Sr. — with whom he works — was well connected to the medical community through his career as an insurance broker, including health insurance, and used those contacts to line up a neurosurgeon to help his son. The surgeon operated to relieve the pressure of blood on Pedro’s brain, saving his life. But, he still had a long road ahead.

Pedro, Sr. has referred many customers to NewYork-Presbyterian/Weill Cornell Medical Center for care they cannot get in the Dominican Republic and has received care there himself. He didn’t hesitate to reach out for his own son.

“I like the way NewYork-Presbyterian/Weill Cornell does things,” he says. “Everyone is so precise in what they do, and they do their jobs with such humanity. I’ve always felt at home there.”

“He was in pretty bad shape when he got here. He was having trouble following commands and interacting with his environment,” explains neurosurgeon Dr. Rohan Ramakrishna, recalling Pedro’s arrival at NewYork-Presbyterian/Weill Cornell. Acutely ill patients with severe brain injuries like Pedro’s often experience temperature fluctuations, seizures, and increased pressure inside the skull (intracranial pressure). Pedro was admitted to the Neurological Intensive Care Unit (Neuro-ICU), where the team monitored his intracranial pressure and brain hemorrhage, managing his brain swelling with medication. He had arrived from Santiago with a tracheostomy to breathe; at NewYork-Presbyterian/Weill Cornell, he also received a feeding tube for nourishment.

Pedro needed a holistic approach to his care, starting with stabilization of his condition, followed by a customized rehabilitation program that included physical, occupational, and speech therapy. Communication with Pedro, Sr. and Pedro’s stepmother, Elizabeth, who stayed in an apartment they had in the city, was key.

“I knew this would be a long process, so I let them know,” says Dr. Ramakrishna. “Our goal was to help their son recover so he could be free of the breathing and feeding tubes and ultimately regain his independence.” 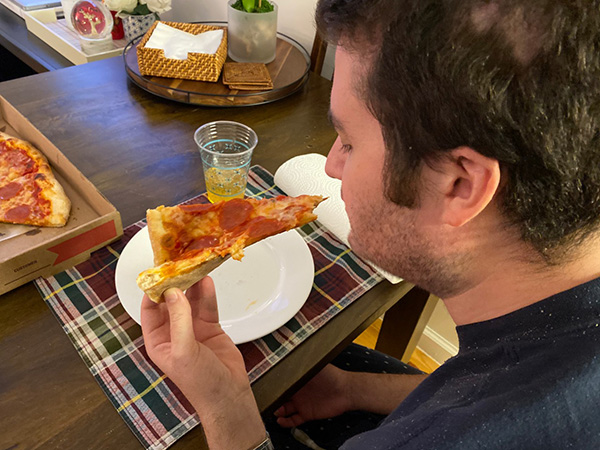 After months of intensive therapy, Pedro can now eat without assistance.

Pedro spent 74 days in the hospital before he eventually moved from the Neuro-ICU to the step-down unit — where neurologist Dr. Saad Abdul Sami Mir, directed his care. On March 26, he moved to the Sue and John L. Weinberg Inpatient Rehabilitation Unit, where his recovery was overseen by rehabilitation medicine physicians Dr. C. David Lin and Dr. Nasim A. Chowdhury.

He progressed from not being able to sit in a chair to using a wheelchair and starting to walk. During this time, the COVID-19 pandemic hit, and his parents had to substitute in-person visits for video chats. Still, Pedro, Sr. was amazed at his son’s accomplishments as he endured hours of therapy every day.

“He started to improve after just the first two weeks, and each week it got better and better,” he recalls. “In every sense, the care he received was excellent. It can be difficult to care for a patient who is not always aware, but the staff was so patient.”

When he no longer needed the breathing and feeding tubes and could handle personal care issues such as using the bathroom, Pedro was ready to go home, where he now receives outpatient occupational and speech therapy.

“The doctor said it can take up to 18 months to recover, but I was pleasantly surprised to see so much come back sooner than that,” says his father, who was able to hear his son speak his first words and take his first steps after the accident via video chat. “At one point I thought we were going to lose him, but now he gains a little more every day. While it will take a while to get back to 100 percent, he is becoming more independent.”

Both father and son are grateful for the lifesaving care provided by the expert brain trauma team at NewYork-Presbyterian/Weill Cornell. “We felt embraced and protected by the institution. Everyone was very accommodating, despite the pandemic,” Pedro, Sr. concludes. “When you go to NewYork-Presbyterian/Weill Cornell for care, you know you’re going to one of the top places in the country with beautiful people inside who not only have incredible knowledge and technology, but also empathy.”